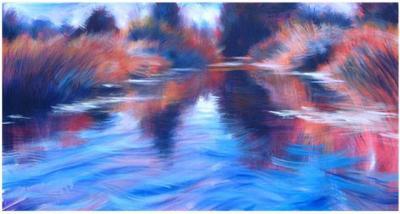 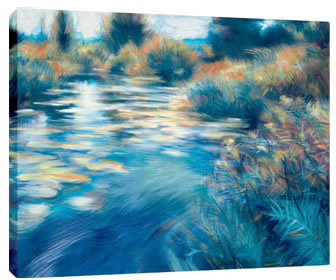 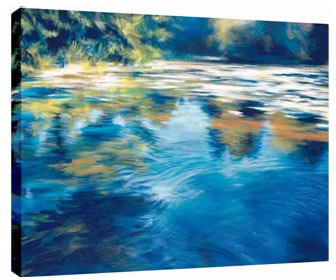 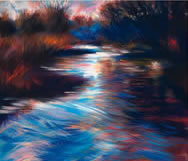 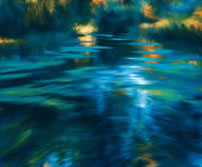 View All Art Works By Nick Andrew
Some contemporary artist’s work hangs from the walls of celebrated collectors, whilst others secure prime time wall space in the most high profile of public places. Like for instance, Hilton International hotels, the Royal London Hospital, the very corporate HQs of Shell UK, Weetabix, Sainsburys PLC, Lloyds Bank and Cable and Wireless to namedrop but a handful. Acclaimed contemporary landscape artist, Nick Andrew’s work falls into the latter category, which probably makes him pretty happy we’d concur. But then his typical landscapes put a smile on all of our faces, on account of their sublime layers and intensity of hues and saturations and an overwhelming sense of compositional qualities which put you at ease from the moment you clap eyes on any example found in Andrew’s portfolio of works to date.

This inner peace and calming ambience, suggestive and ever-embracing in his compositions, is borne out of Andrew’s immediate surrounds in which he finds himself. Home (and studio) to Andrew is a watermill, positioned on the upper reaches of River Wylye in deepest, lightest South Wiltshire and it’s these environs pictured close by that lend themselves to his visually heightened pieces which characterise his main body of work. Speaking on the subject, Andrew concedes; “I’m drawn to quiet, intimate, secluded places within my immediate landscape and, in particular, a three-mile stretch of the River Wylye close to where I live, along with adjacent water meadows and nearby woodland”. On a daily basis he talks of witnessing changes in the lie of the land, with the passing of individual seasons being particularly dramatic as one might expect with these commanding vistas literally on your doorstep.

Wherever and whenever Andrew wanders, you can guarantee his sketchbook, notebook and camera will be close to hand, as he makes both visual and written documentation to turn to once back ensconced in his studio and faced with that blank canvas to bring to life with his empowering use of acrylics. Andrew finds himself drawn by what he calls the abstract qualities of the landscape he’s constantly privy to, in as much the way we can address a river flow perhaps, admiring its multi-layering and reflectivity, whilst textures, tonal variations and volumes noted in wooded areas (often taken for granted and not observed from any alternative perspectives) take on new forms to an eagle-eyed Andrew, continually on the look-out for new and improved illustrative recipes. He also cites the oft-overlooked movement, rhythm and shades which comprise field grasses and plant life as instrumental in his eventual compositional perceptions. In his own words, Andrew adds, “I would like to think that I convey through my paintings the sense of quietness and ‘solitary involvement’ with this landscape.”

Andrew graduated from university back in 1979, having studied both art and graphic design at further and higher educational seats of learning situated in Oxford, London and Cheltenham. After completing his studies, Andrew made his home in Wiltshire, and has remained there ever since, fully engrossed by his full-time role as a professional landscape artist, which has brought with it many successes, including the knowledge that many of his pieces are on permanent display in some of the corporate world’s biggest player’s offices. What’s more, Andrew has seen his work showcased near and far, extensively so throughout the UK (including stints at prestigious galleries such as, Picture House Gallery, S10 Gallery, Wykeham Gallery and Reubens Gallery) and mainland Europe, with galleries in America also having exhibited the artist’s individual works and collections over the years.

Andrew has really immersed himself in his inspiring, rural habitat, especially since moving to the current watermill residence, perched on the banks of the River Wylye as touched on above, including working as an art tutor and lecturer in the region and running various courses and related art workshops throughout the South West of England per se. in addition to this full diary, Andrew has found time to also establish the Wylye Valley Art Trail, a biennial open studios event in South Wiltshire, which he still co-ordinates.