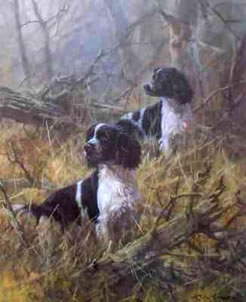 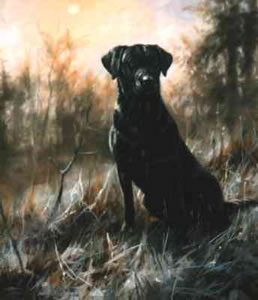 View All Art Works By John Trickett
From trained accountant to footballer to fine artist. Now that’s quite a journey by anyone’s standards, and usually the type of career progression you witness a soap opera character doing to be fair. Yet John Trickett is no actor (probably never the time with all those other vocational commitments), but what he is, is a fine artist. And former accountant and ex-footballer, etc, etc. on a serious note, Trickett has forged an enviable reputation for himself as an acclaimed (and much collected) painter of dogs, first and foremost, and working/gun dogs at that. But just how did he make the unlikely transition from bean counter to footballist to bona fida fine artist, and who’s now considered as one of the most important dog painters of our era?

Trickett’s story begins in Sheffield, the unofficial capital city of South Yorkshire in the UK, and the fond recollection of a lovely childhood full of warm and vivid memories. An only child, Trickett attended Winteringham Grammar school and it wasn’t long before his talent for a certain subject was spotted and thereafter encouraged and nurtured by teaching staff, family and friends. However this subject wasn’t art, rather it was football. And being a footballer was Trickett’s singular goal (if you pardon the pun) in life from a relatively early age. Incidentally Trickett didn’t start to paint until his early 20s, not properly, despite having being interested in art as a youngster.

So, and in terms of association football, Trickett got his lucky break with Grimsby Town Football Club, before being transferred to Torquay United where he signed his first professional contract. It was whilst Trickett was playing for Torquay that he first experimented with paints and brushes. Quite the departure for modern day footballers who traditionally fill the time between training and matches with visits to the bookmaker and the nearest supercar dealer. But then clearly, Trickett wasn’t your typical footballer, and also Trickett’s time as a footballer wasn’t during the past 10 years or so, when the market’s gone crazy. Anyway, we digress. Trickett started to paint the likeness of landscapes and seascapes, which he had any amount of on his doorstep on the South Coast, yet also explored portraiture as a potential genre too.

Struggling to make it as a professional footballer (and essentially to make a living) Trickett made the decision to quit the game and return to his native Humberside and South Yorkshire environ, and re-settled in Grimsby. Having turned his back on football Trickett found employment as a fork lift truck driver, while continuing to paint in his spare time. As Trickett’s portfolio grew in volume, he came to the conclusion that he should share his art with the general public, to gauge opinion if nothing else at that juncture. The budding artist approached his local library, who were only too happy to showcase his work, which proved to be a great success. On the back of this praise, Trickett pursued the idea of getting someone to promote his work on his behalf, in the capacity of an agent, perhaps.

Trickett happened on a magazine advertisement for such a person, made initial contact and arranged to meet up with them, complete with a couple of his original pieces of art under his arm to afford them a flavour of what he did then and there.

The person turned out to be an independent art publisher, who was so impressed with Trickett’s work that they snapped up the originals he’d come armed with on the spot and moreover agreed to represent him as an artist going forward; thus commencing one of the most enduring artist-publisher relationships in the industry.

From that point onwards Trickett knew he’d struck gold, in terms of the collaborative efforts he would enjoy with the publisher and the fact that his art had been so well received from the outset, and with this very much in mind he strived to originate more and more compositional works. Inspired by the likes of the masters such as Rembrandt and Caravaggio, Trickett had moved away from those early landscapes and seascapes that spawned his love for art, and instead he found he had something of an illustrative knack for manifesting the towering likeness of game dogs, or working dogs if you prefer. Pointers, Springer Spaniels, Border Collies, Retrievers and Labradors being chief amongst which. So much so that leading countryside pursuits magazine, the Shooting Times, famously declared that Trickett’s accurate portrayals of Black Labradors were some of the finest in the world. Quite the accolade and evidently the sort of feedback that would inspire anyone to go from strength to strength.

Trickett would dedicate much of his time to being in the field so to speak (and a very different one which met with his initial career choice), where he would spend hours studying scenery and taking photographic references of his subject matter and animal/wildlife muses, so as to capture, hone and ultimately, perfect them in their natural environment, and more important in the thick of the action as is habitual to these predominantly gun-orientated dogs. Trickett’s immediate vistas were primarily of shooting landscapes, from the fenlands of Norfolk to loch scenes around Scotland, many of which incorporated a slice of the countryside indicative of the specific area.
And just for the record, the very first piece of art which Trickett had published as a professional artist for commercial effect was of a Springer Spaniel in the snow, whilst most recently his publishing back catalogue has exceeded 300 images that have secured their existence on both prints and cards.

Trickett’s first industry recognition was sealed when he was awarded a silver medal in France for one of his early Labrador paintings, while he also saw limited edition plates bearing his bespoke artwork produced and manufactured by the Franklin Mint of America in 1996, ceramically showcasing his Labrador pictorials once again. These days Trickett can be found living with his partner and their three cats in Nottinghamshire, further surrounded by his three children and subsequent grandchildren, while he’s also published a book about his life and work, entitled, ‘Reflections of the Countryside’. This popular title is crammed full of a collection of his signature illustrations and also includes a section teaching people how to paint a dog in Trickett’s style. Elsewhere and Trickett’s paintings and prints proudly hang from homes across the globe, as far a field as Europe, America, Australia and Japan, as he continues to cement himself as one of the greatest dog painters of his generation.