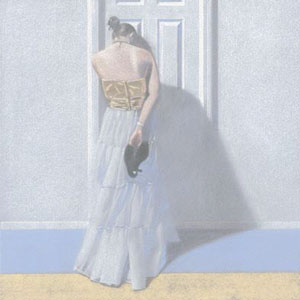 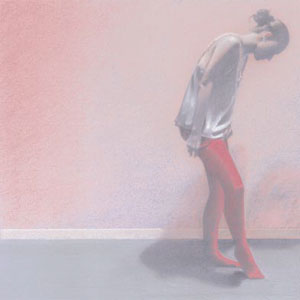 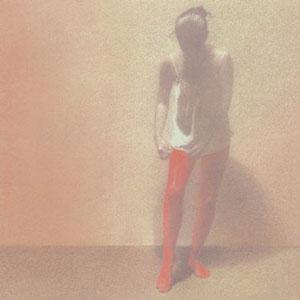 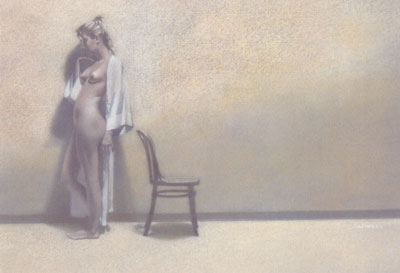 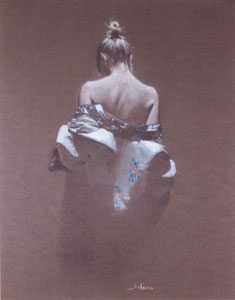 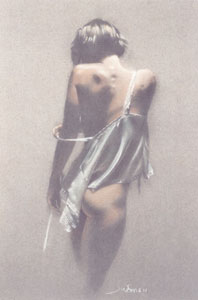 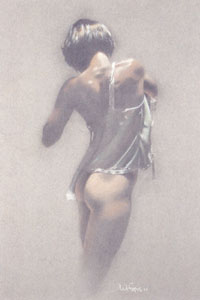 View All Art Works By Jeff Cornell
In a society obsessed with the bigger, bolder, taller, brighter, faster, louder, shinier, it’s something of a welcome change to witness an individual robustly pre-occupied with the simple things. Someone who readily buys into the less is (way) more philosophical approach to his art of art. Someone who’s art is arguably the most difficult and challenging art of all, ironically, as he strives to deliver his special blend of artistic understatement. That someone is contemporary figurative fine artist, Jeff Cornell, who does his level best to offer us something very different from the norm, even that discovered in this, habitually more subtle genre of fine artistry.

What Cornell does and what he does regularly and with aplomb is paint a suggestive art. The art of suggesting human subjectivity, a fascination with embodying through his compositions the unexpressed thought, subcurrents of emotions and unwrapped desires, as opposed to slapping them all down on a crude canvas – albeit with dramatic effect – to leave little if anything to the imagination. Which tends to be par for the contemporary artistic course on many an occasion. Naming no names. Cornell’s muse tends to be of the female variety, and caught in a plethora of sensuous poses more often than not. In the hugely popular artist’s own words; “The female form is of arresting beauty, there is no other thing I would care as much to portray through my work.”

There is no shadow of a doubt that Cornell’s compositions are nothing if not masterful in their originality and creation, proffering an intoxicating yet relaxed atmosphere around his gregarious but at the same time, subtle female forms. Simplicity, sophistication and indeed, sensuality are the three buzzwords that best describe Cornell’s signature pieces, with these 3 ‘S’s’ being at the core of every study he envisages and goes on to undertake and complete in his favoured pastels – and most notably, just traces of the defining image – which he considers to be the purest method of painting. Opting to frequent little if any tonal grading in his trademark works, Cornell’s paintings depict rounded, sinuous forms and volume, however with minimal introduction of colour. Despite this, the vibrancy and emotion are graphically present and the measured economy of lines and texture is never detrimental to the degree of realism projected, whilst movement is merely implied, along with thought, feeling and action, courtesy of limited narrative structure.

Born and bred in Connecticut in America, Cornell went on to study at the Paier School of Art in Hamden in his birth state between 1968 and 1972, and upon graduating in his fine art disciplines he embarked on a career as a professional freelance illustrator. Having said that, Cornell returned to his higher educational establishment in 1985 in the capacity of Adjunct Professor, teaching advanced illustration techniques for a couple of years to the next generation of future contemporary artists. That wasn’t Cornell’s only spell lecturing art however, as between 1982 and 1983 he’d held the same position, tutoring the same art principles at the University of Bridgeport also in Connecticut. Cornell has completed commercial briefs for a host or corporate clients over the intervening years, not least some high end illustrative work on behalf of the Carnegie Corporation, Exxon, General Electric, IBM, Roche and Wyeth Pharmaceuticals, while he’s also undertaken projects for print clients such as glossy magazines, Cosmopolitan, Good Housekeeping, Reader's Digest and Sports Illustrated. What’s more, in both 1979 and then again in 1985, Cornell was invited to design special Olympics postage stamps for the US Postal Service as part of a commemorative commissioned piece.

When pressed on his inspirations and artists who have perhaps influenced his very unique style, Cornell cites a cross section of some of the most revered exponents and figureheads representative of diverse art movements, including Klimt and Schiele’s drawings, the Impressionist works of Frenchmen, Monet, Manet, Bonard, Vullard and Degas, yet reserves special mention and praise for celebrated American Impressionists, Hassam, Tarbell, Robertson, Thomas Dewing and William Paxton.Cornell recalls an oil painting by Paxton that he was privileged to see in Boston, entitled, ‘The Nude’, and waxes lyrical about its smoky, monochromatic look and ambience, describing it as soft and sexual, yet equally romantic, and how these elements and that particular composition fired his own illustrative imagination from the outset.

Cornell insists that he wished to portray the female figure – incidentally what he believes to be the most consistently challenging, although clearly alluring object to commit to canvas – in this essentially monochrome value and visual resplendence; and to afford the viewer the feeling of something altogether soft and sexy wrapping itself around you. A piece that when you close your eyes tightly and take a deep breath, you’ll observe not a single shout, only whispering. Cornell adds; “I want my work to speak to every person who views it, but it is important to me that the message be whispered rather than shouted”.

Cornell regularly exhibits in New York, Colorado and his home state of Florida, and his work is held in high esteem amongst a growing company of collectors in the USA and UK.