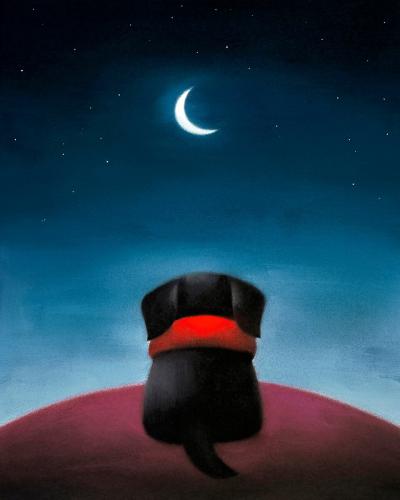 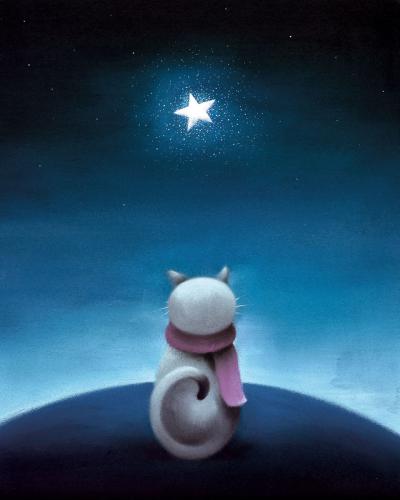 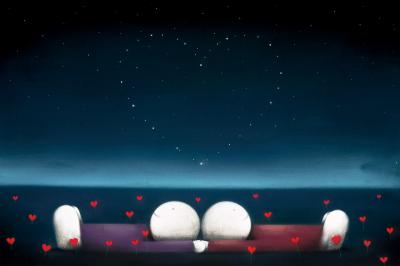 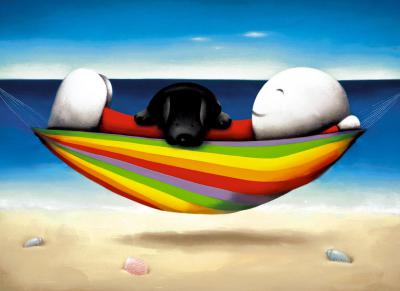 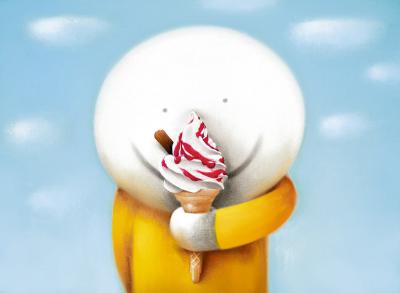 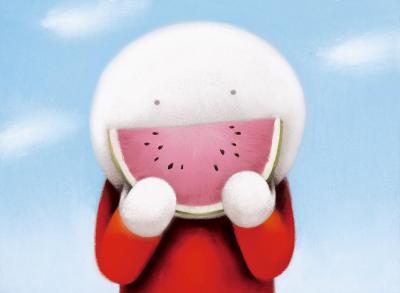 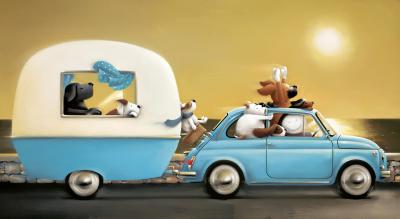 View All Art Works By Doug Hyde
Warmth, comfort, belonging, understanding, acceptance, togetherness and respect, along with fun, adventure, exploration and ultimately, love and companionship for life are the words and phrases any fan of contemporary artist, Doug Hyde would use to describe what underpins his collective works and moreover, sculpts his very thoughts before he even commits an extensive palette of vibrant pastel shades to canvas. Children, family and animals are discovered at the centre of the majority of Doug Hyde works of art, which are without question there by design rather than accident, and it’s a positive, energetic approach to life that manifests itself through his collections.

With a penchant for utilising his fingers, thumbs, wrists or any other flexible limb when it comes to the (very) physical application of his favoured pastels, Hyde insists that it’s this fearless freedom to experiment with putting a concept down with that chosen medium that brings out the best in his finished work. Hyde prefers to work on a large scale, so as to convey maximum impact from the outset of a viewer’s relationship with the individual piece. Hyde finds the greater the surface space on which he has to work, means the greater freedom he has to express his emotive self and message through that artwork. Hyde makes no excuses for predominantly wanting to provoke response and ultimately, action courtesy of his larger than life pieces, which he hopes will inspire people to look at things and situations and connect with them in a more optimistic manner; much in the way his childhood influences and surroundings fired his imagination

Acknowledged as arguably the most popular contemporary living artist, Doug Hyde is certainly a prolific one, whose works are much sought after by seasoned collectors and general art aficionados alike, yet it wasn’t until 2003 that his stock as such, witnessed such a meteoric rise in the art world. Since then, Hyde’s images and sculptures haven’t been out of the spotlight and as an artist has met with critical acclaim, with the Fine Art Trade Guild recognising Hyde as the country’s Best Selling Published Artist in 2005.

Doug Hyde was born in Bristol in 1972, and despite being told by careers advisors at school that ‘there’s no such thing as ‘being an artist’’ and that ‘it’s just a hobby’ this discouragement had the opposite effect on a teenage Doug; who knew in his heart that if he were to progress in life then it had to be within a creative environment

Hyde’s formative years were also shaped by the effect that having a disabled older sister had on his family, yet this scenario also provided Hyde an innate insight into the way disabled kids would interact with those around them, as he mixed with gatherings of disabled children at various functions. He talks of their immense human spirit and ability to take everything in their stride when drawn on this subject.

On leaving school, Hyde opted to take up employment in a draughtsman’s office. However his eyes were opened still further when attending a technical drawing exhibition, where he was overwhelmed by the attributes of technical illustrators, resulting in him applying for a college course. Irrespective of him not being in possession of the relevant entry qualifications, he won potential lecturers over – and was ultimately accepted on the course – on the basis of his outstanding portfolio of art.

It wasn’t long though, until Hyde began feeling restrained by the lack of perceived creativity that technical drawing and illustration afforded him, regardless of the skills he was acquiring. So he set about working in his own time, culminating in art that was as energetic and fluid of movement, as his 9 – 5 creations, weren’t. Friends and family soon put in requests for his bespoke artwork, and Hyde rapidly gained a reputation at a local level, with exhibition invites following.

Hyde works very much through a stream on conscience, meaning he has to scribble down his creative ideas at the time he experiences them, wherever he happens to be and with whatever medium he has to hand. Apparently he has a box in his studio that’s crammed with thoughts at any given time, found scrawled on bits of newspaper, serviettes, etc. yet it’s this ‘ideas box’ as he likes to refer to it as that’s responsible for the nucleus of his finished artistic concepts. Hyde explains that he still, to this day, has a simple mantra as to how he imagines a piece before he even reaches for his pastels. He’ll sit there and firstly envisage the very room where he’ll see the work hanging. The same approach he’s exercised for the past decade.

Away from the very real impact that his work has had on the UK and international art scene, Hyde’s work has managed to raise a lot of money for two particular charities close to his heart; ‘Look Good…Feel Better’ (that focuses helping female cancer patients to manage the visible side effect of the disease) and ‘Families For Children’ (which campaigns for and raises awareness of adoption issues).