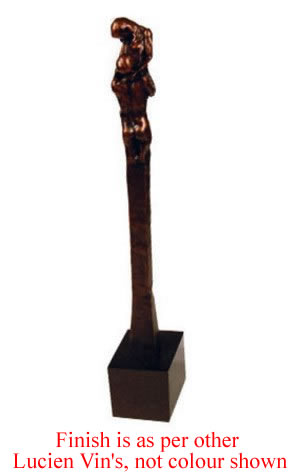 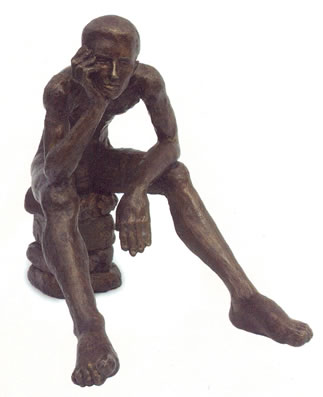 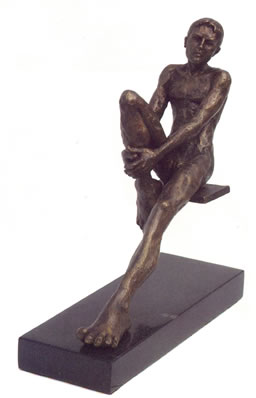 View All Art Works By Lucien Vin
Rather like Anthony Gormley’s famous beach-based life-sized sculptures (based on repetitive casts of himself) stand and stare out towards ‘Another Place’, acclaimed contemporary sculpture artist, Lucien Vin’s (albeit scaled down) statuettes look equally as forlorn as they stare into the middle distance. Titles such as ‘Waiting, Watching’ and ‘Wondering’ do little to dispel the seeming abject hopelessness of the individuals cast in bronze, yet this is part and parcel of the sheer majesty, creativity and craftsmanship of Vin’s pieces de résistance. A modern sculpture artist whose signature creations are in popular demand with both fans and serious art collectors alike, and which new releases are repeatedly anticipated and critically received to date.

Brought up in the French capital revered for its culture and artistic fervour and placement, Paris and later decamping to an equally inviting creative surround which was flocked to by artists from the year dot (Florence by the by), Vin is the offspring of an art historian and lecturer. Who after Florence, relocated his family to Rome. As you can imagine – and on account of the destinations we’ve just mentioned – Vin’s formative years spent in these cities afforded him unlimited access to amazing art galleries and museums, whilst art was always a topic of conversation and dialogue in and around the family home. However many times it upped sticks. Indeed, Vin never forgets his first visit to the Musée Rodin, where he was introduced to great sculptural works of art which clearly embedded itself into his psyche.

After finishing his formal education, and on the encouragement of his parents, Vin was told to go forth and venture around Europe, which he didn’t need asking twice. Duly obliging his parents, Vin travelled with a group of French students on a similar voyage of artistic discovery/enlightenment, and what started out as a month-long tour ended up two years later. Two solid years in which the impressionable Vin indulged in the relentless viewing, discussing and creation of art. Inspired by what he had been exposed to and chomping at the creative bit, Vin returned home in 2000 and honed his fledgling painting and sculpting attributes, supporting himself by running research projects his father’s colleague during this period. Once Vin had compiled enough of a portfolio, he approached local, smaller galleries, with one such establishment offering the aspiring artist exhibition space for him to host a solo show. Said show went down a storm, and the response overwhelmed Vin, as he looked to fulfil the number of commissions he’d received.

Not only was Vin in receipt of commissions, but the local press had got wind of his talent and along with the artistic grapevine news of his work spread fast in the region, with his star becoming very much in the ascendancy in the following weeks and months. So much so that by the end of 2002 Vin had acquired his very own studio space and was making a go of his sculpture as a business concern. Still influenced by some of the greatest names in history, he has brought his own artistic voice to the classic genre of figurative sculpture, and his thoughtful contemporary pieces evoke a sense of stillness and contentment.

As we write, Vin has seen his work showcased across Europe, with his bespoke sculptures in demand with both individual and corporate collectors.