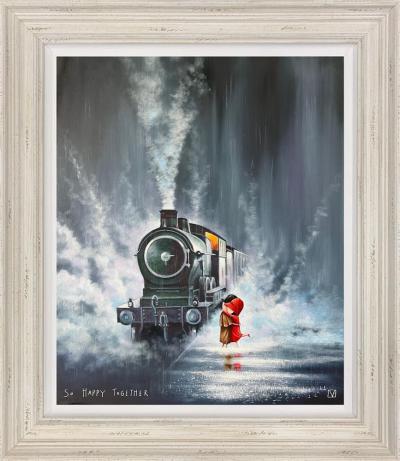 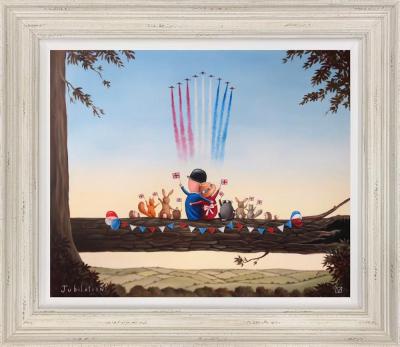 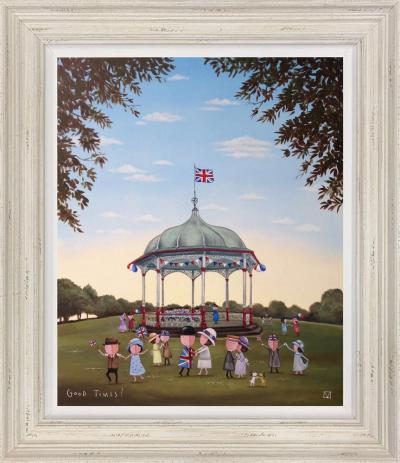 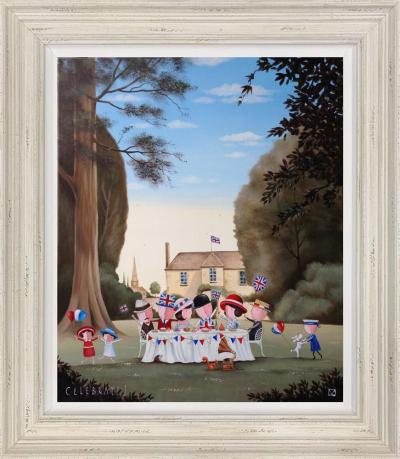 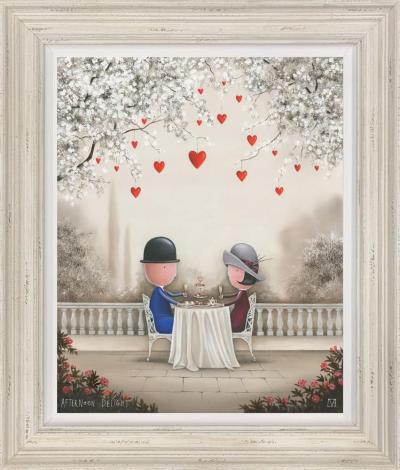 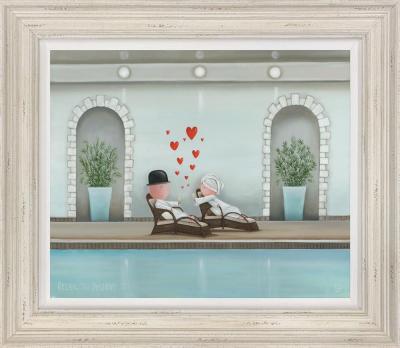 View All Art Works By Michael Abrams
People with hound’s heads in place of their own heads. Every day folk going about their business, walking their dog in the park, posing for a family portrait or just hanging with their friends. Only sporting the head of a hound dog. Reminiscent of the goings on in a pop video for example. That’s what fine artist (albeit with a fantastic sense of humour) Michael Abrams is known for. Not just dog people though, as he’s also pretty darn good at painting cats and dogs (minus human heads we hasten to add) too. And sheep, cows, tortoises and rhinos when the mood takes him. Very happy animals and people too when Abrams creates humankind in his visually stunning compositions.

Abrams evidently showed some demonstrable artistic promise at school, as he recalls at a parent’s evening in 1969 his junior school teacher enquired with his parents as to whether or not there was any artists in the family. Which there wasn’t, in the event. Despite exhibiting this fledgling talent (or perhaps because no names on either side readily springing to mind) a young Abrams wasn’t actively encouraged to nurture and develop his creative ways when he progressed to comprehensive school in Leeds in the early 1970s, which Abrams reflects contributed to his failure to secure a place at art college on leaving an educational surround in 1978. The budding artist (who apparently wasn’t related to David Hockney in any way whatsoever as it turned out) plugged away with his artistic endeavours on a part-time basis on leaving secondary education in the late 1970s, whilst holding down various non-creative positions. Indeed, Abrams sought employment as a fork lift truck driver for the best part of a decade thereafter. That moonlighting role however, just happened to be in the guise of designing greetings cards, which on-going briefs Abrams completed for a number of top publishers back in the day, while holding onto the dream that he would one day become a professional artist in his own right. In 1990, opportunity finally knocked for Abrams and he launched his professional artistic career.

Abrams therefore owes everything he knows and understands from a creative viewpoint to hard work, self-teaching and discipline and good old fashioned trial and error. And practice makes perfect. And other such adages. Two decades on and Abrams goes from strength to strength, having in recent years diversified his commercial output and ramped up his CV no end. From the design of figurines for the Thailand market, animating in Hungary and originating ceramic blueprints for Wedgwood featuring his teddy bear characters, Abrams has also seen his work showcased in New York, adding an even broader demographic to his burgeoning fan base. In 2010 Abrams chose to enter the bespoke fine art fray and approached the UK’s leading art publishers, Washington Green, who suffice to say snapped him and his work up on the spot. Following this successful collaboration, a limited edition collection of Abrams work was circulated to in excess of 200 art galleries, complimented by a selection of original art compositions which now hang in homes far and wide.

In terms of Abrams’ inspiration – and in particular his penchant for capturing the colourful if not quirky likenesses of animals on canvas – the artist lets slip that his wife is a dog groomer by trade, and her exploits in the grooming parlour and the canine characters that she meets on a daily basis provide Abrams with a constant source of material. Influences less close to home include household name artists of many creative persuasions, from David Hockney and Picasso through to Beatrix Potter, whilst Abrams is a long-standing aficionado of the whimsical (yet often satirically ‘on trend’) cartoon musings of Ralph Steadman and Terry Gilliam. Although he concedes that his genial creature features are committed in a contemporary fashion, Abrams adds that he hopes to achieve a certain degree of realism when depicting the emotional traits and unique facial nuances particular to a domestic breed or species. Often applying his paints with bits of cloth and his fingers so as to tactily manipulate the medium, Abrams speaks of this process affording the finished piece more energy and pictorial pace, and goes on to concur that it’s only at the very end that he confirms the visuality of the animal’s eye. In Abrams’ own unabashed words; “As soon as I add the pupils I cannot help smiling as suddenly there is an animal with a personality staring back at me!”