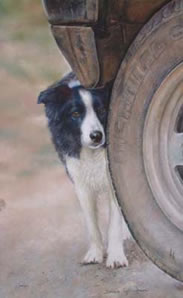 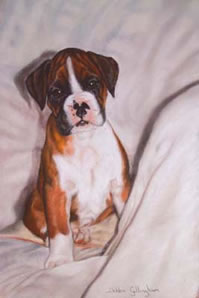 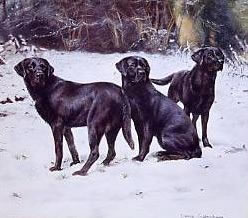 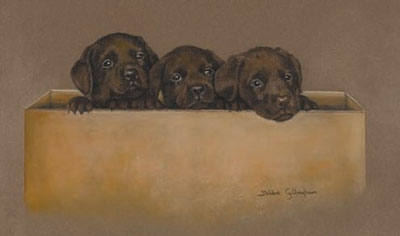 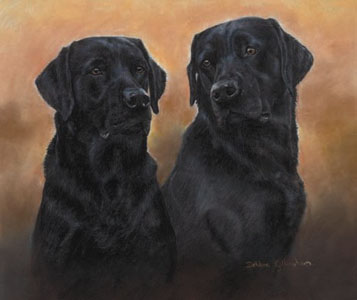 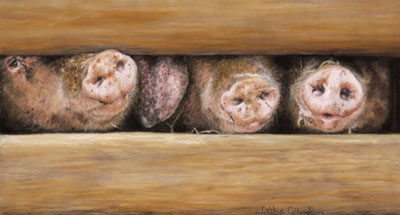 View All Art Works By Debbie Gillingham
Leading contemporary animal fine artist, Debbie Gillingham manages to successfully combine her two greatest passions in life, animals and painting to great effect, and it was largely due to her love of horses in particular that flung open the doors to her impressive career to date as an artist. For as long as Gillingham and her family can remember, sheâ€™s always been fascinated with animals, and would lose hours drawing and sketching all manner of creature features as a child and during her formative years. In fact, Gillingham even recalls one of her early paintings hanging from the walls of her primary school headmasterâ€™s office, believe it or not. Thatâ€™s one way of avoiding detention we guess.

Born into a large family and brought up in rural Somerset, for Gillingham her first memories of artistic materials were erstwhile felt tipped pens and poster paints, rather than any more sophisticated, whilst her typical muses were predominantly of the four legged variety. Growing up in a small village, Gillinghamâ€™s immediate world was populated by horses, ponies and dogs as much as homosapians, so it was inevitable that her creative influences would stem from here. Similar to artistic young boys obsessing over trainers and drawing the likeness of their favourite pairs at every turn, Gillingham embraced the girlâ€™s alternative, wiling away days and weeks sketching horses and ponies in a subtle attempt to sway her parents, subliminally perhaps, into allowing her to have her own real life one. Plus the young Gillingham also just happened to love/show talent for sketching said equines. Eventually her parents capitulated, and Gillingham got her very own pony apparently.

On leaving secondary education, Gillingham won a coveted place at Somerset College of Art and Technology, where she chose to study Design and Clothing Manufacture for two years. After graduating in this discipline in 1990, Gillingham upped sticks from her native Somerset and plumped to relocate in Newmarket in Cambridgeshire, although for good reason; notably because itâ€™s situated at the epicentre of the UKâ€™s flat racing industry. During her time at college â€“ and because of her continued love affair with horses â€“ Gillingham had arrived at the conclusion that she should be an equestrian artist; only of course this couldnâ€™t happen overnight. So her plan was to gain employment in the area as a rider and stable hand, whilst every minute of her spare time would be dedicated to furthering her painting skillset, and in particular the art of painting horses.

So, essentially, by day Gillingham would ride, clean and groom her generic muses, then by night sheâ€™d paint them, applying herself with aplomb to gaining a wealth of knowledge and reference on her intended long-term subject matter. Over the following period of time, Gillingham steadily gained a reputation amongst the local equestrian community for her compositions, and eventually she started getting approached to undertake commissions for both horse owners and jockey themselves. Yet after five years in Newmarket, Gillingham believed it was time to move on to seek pastures anew.

An opportunity arose for her to work in Dubai, which Gillingham leapt at on account that it was an exciting and rapidly emerging horse racing environment (something sheâ€™d discovered after enjoying a fortnightâ€™s recent holiday there), instinctively knowing that this would be the perfect time and place in which to launch herself as a professional artist in a full-time capacity. It didnâ€™t take Gillingham long to start making inroads into this new market, and commissions began to roll in, whilst galleries also began taking an avid interest in her signature work, not to mention prominent figures in the horse racing world, like Michael Hills and Frankie Dettori amongst others. At the same time Gillingham was introduced to someone who became her long-time friend, her Springer Spaniel, Toby. As fate would have it Gillinghamâ€™s equestrian art caught the eye of one of the worldâ€™s most prominent racehorse owners who had been presented with one of her compositions, which there and then pretty much sealed her already burgeoning reputation as an artist. From there she went from strength to strength, and her back catalogue of work originated during this period can be found in many prestigious private collections in the Middle East and elsewhere around the globe.

As of 1997 though, Gillingham made the decision to return to the UK to pursue her art career, the focus of which was gradually moving away from horses and more towards dogs, which she had noticed there was more demand for at that time. This transition proved equally fruitful and commercially successful, especially so in the direct aftermath of her new canine collections being showcased in galleries across the South West of England in the intervening months. In 2000, Gillingham agreed to being represented by one of the UKâ€™s leading art publishers â€“ Washington Green â€“ since which time sheâ€™s become acknowledged as one of this countryâ€™s most respected canine artists and finally fulfilling one of her initial ambitions when she started out.

Gillingham also required an addition to her canine family too, a Black Labrador going by the name of Friday. Both Toby and Friday provide constant sources of pictorial inspiration to Gillingham, despite currently experimenting with an array of diverse breeds, while frequenting her favoured soft pastels on sandboard, materials and mediums which the artist concurs affords her illustrations a depth of texture and sheen to her subject matterâ€™s coats.