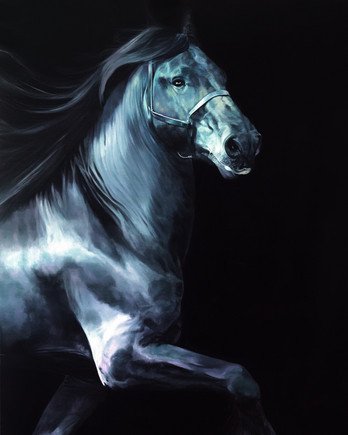 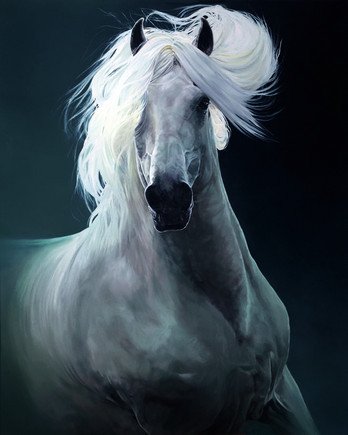 View All Art Works By Lesley Thiel
Beauty as they say is found in the eye of the beholder. And providing that the beholden one likes horses, then they’ll concur that celebrated contemporary equine artist, Lesley Thiel’s compositions are incredibly beautiful. And they wouldn’t be wrong, as even those of us with little interest in our equine friends will testify, Thiel’s paintings are perpetually pleasing on the eye and underlines just why her back catalogue of work proves so popular. But then Thiel is a great believer in the power of beauty to move people, emotionally, as she hints at in her artist’s statement, which can be discovered on her website. But you can look at that later, as for the time being you can find out all you need to know about Thiel’s background right here.

Playing up to dramatic lighting and seeking to capture the sincere likeness of her subjects in habitual motion, Thiel strives to ensure that, Illustratively, her pictorial forms convey those special emotions, and connect us to her muses. Thiel is a great believer in works which manifest themselves as having been spontaneously conceived, which visually document what might well be a transient event, and which from this perspective is graphically formulated as though the subject is about to literally part company with the canvas in a three-dimensional capacity if you like. This feeling and underlying sense of fluidity is best expressed through Thiel’s administering of a broken colour technique, which harnesses and accentuates the visual presence of calibrated movement. And whilst Thiel admits that for the large part her portfolio comprises of horses, she doesn’t necessarily consider herself to be an equine artist per se. in fact, she feels she has more common ground with portraitists on account of Thiel also being responsible for pets and people paintings hitherto.

English born and bred, Thiel studied at London University, prior to relocating to Europe – and then settled in America. Indeed, it was whilst living in the United States that Thiel discovered a passion for horses after being introduced to various creatures at a friend’s Arabian Stud, with this exposure inevitably leading to the acquiring of her own beast. Despite always having being interested in art, the subject had had to take a back seat for differing reasons/commitments, although she still counted it as a hobby and in such capacity had dipped in and out of it during the intervening years. But now all of a sudden, Thiel began to feel herself drawn to the individual personalities and distinctive natures of horses, something which had never crossed her mind before. And this inspiration began to manifest itself back on Thiel’s canvasses, in both drawn and painted form and function. Describing the feeling, Thiel points out: “The beauty of a horse in motion has the capacity to suspend time for the viewer. This is the magic they possess and to which so many of us are drawn”.

In 2003, Thiel returned to her native UK, and immediately committed herself to her art, launching herself as a professional and working in a full-time capacity, having being wholeheartedly influenced by her time – and interactions with horses – in America. Choosing oils and pastels as her artistic weapons of choice, Thiel concedes that her outside inspirations – or at least, famous artist/movement ones which readily spring to mind when put on the spot – are the revered likes of Ruebens and Bonheur, both of whom pictorially translated the spirit and energy of horses to the canvas. Thiel’s insistence on frequenting delicate and measured pastels and soft hues and saturations, ensure that the natural beauty and grace of equines are captured forever within her enticing frames. Explaining just why she chooses horses predominantly above other muses, Thiel suggests: “Horses are such an amazing mixture of curves and planes. When they are in motion they have a fluid grace which is simply breathtaking”.

From the sheen of the body and flanks, the flex and stretch of muscle and sinew in the neck to the flowing mane in all of its natural glory, Thiel speaks openly about her love of visually determining the very essence of horses, strengthened by her intimate knowledge and understanding of a horse’s anatomy courtesy of her own first hand involvement, first in the USA and continued back in England with her own. In terms of breath-taking movement and visceral action, Thiel has opted to concentrate on creatively establishing the very embodiment of some of the oldest breeds of horse in the world. The Arabian, Lusitano, and Andalusian are recurring themes in Thiel’s portfolio, and to the uninitiated encompass an innate spirit and beauty though movement, all of whom as breeds have are honed in working in partnership with man and are renowned for their kindness, intellect and vibrant characters.

Thiel has seen her work showcased in both London and Newmarket galleries, the Mall and Palace House respectively, with the latter of course found nestled deep within equine country. What’s more, Thiel’s limited edition prints have been circulated widely in UK galleries, and have found homes with private collectors across the globe to date, including as far afield as North America as well as Europe. Of late, and Thiel has been enjoying compiling a series of compositions featuring the Coldstream Guards and Blues and Royals of the Horseguards, throwing her artistic spotlight on the pageantry side of horse life, and therein pursuing new horizons and welcome variations on a familiar and well-received theme.