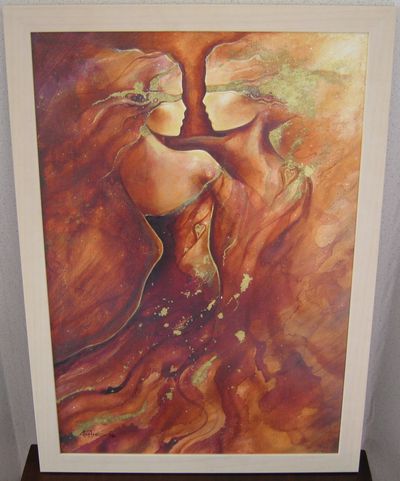 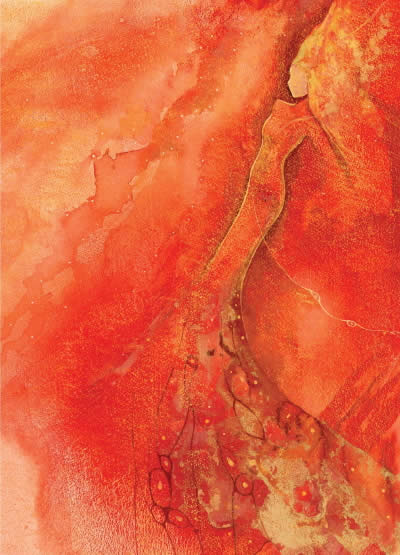 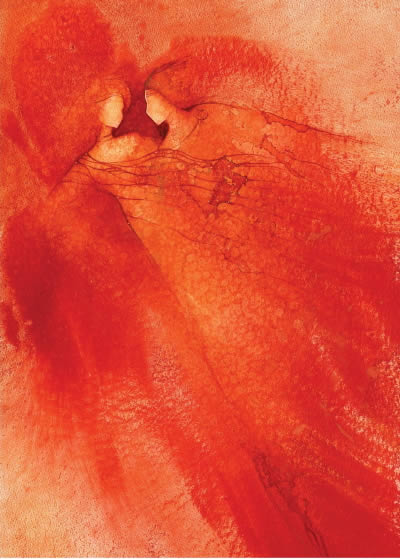 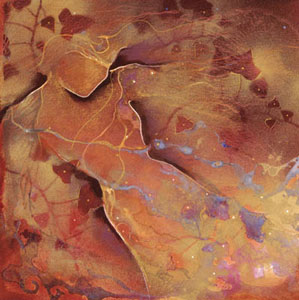 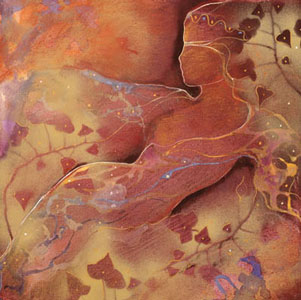 View All Art Works By Charlotte Atkinson
Without it seems ever referring to them as mermaids, exciting contemporary figurative artist, Charlotte Atkinson appears to craft a justifiable successful living from creating the unique, illustrative likeness of the mythical creatures of the sea. Her exquisite pictorial renditions of these half female, half aquatic creature are second to none and possess that ethereal, other-worldly visual seduction of a Kerry Darlington number to our minds. More often than not focussing her attention on the one, singular mermaid, Atkinson does depart from this unwritten rule sometimes and pitches two or more fairytale creatures together on occasion, yet irrespective of character volume the depth of illustrative character depicted in each and every composition is simply stunning.

To the uninitiated, Atkinson’s (now) hallmark work concentrates on the premise of the flow of the wind and sea, with her paintings seamlessly ebbing from one specific point in time and canvas to another; systematically causing the casual observer to become ever engaged and enveloped by the oft-turbulent frenzy of colouration and imagination running riot on the canvas. And although we imply the figurative subject matter is of a more mythical nature than human, critics suggest otherwise, intonating that the forms are more human and possibly symbolise the aspect of nature which humans hold within them.

That’s to say, from a purely scientific stance, the underlying fact that we’re supposedly 89% water, along with the oxygen in the air and the wind that we breathe is more or less the compositional juxtaposition if you like. Rather than an out and out tale of mermaids. Admittedly they could be on to something there, as on closer scrutiny you note other forms superimposed onto the canvas which themselves allude to this theory. Such as symbolism from playing cards to stars, thus manifesting a vivacity which can only usually be captured within nature.

Born in Plymouth in Devon in 1973, Atkinson naturally grew up developing and nurturing a love and kinship with the nearby sea and the spectacular south west coastline in general, and now gets to revisit and live her formative years over and over through her personal and sometimes intimate portrayals. After finishing her secondary education Atkinson left to attend the Hereford College of Art where should would train and study to become an illustrator, and once she had completed that course Atkinson followed a similar higher educational programme at the University of Derby.

Not long after successful graduating Atkinson was invited to take up the role of Artist in Residence at a rurally-set arts centre on the Scottish coast, and obviously jumped at the opportunity presented. Thereafter, and after making a name for herself and her art in this environment, Atkinson was commissioned to create original work on behalf of a refuge centre for female victims of domestic violence, and it was pretty much at this juncture when she realised she had to become a professional artist; and seek to visually communicate any given thought, concept, message or understanding through the unique gift she had been blessed with.

Once the decision was made and Atkinson got into her stride, there was no stopping her, as her talent and work ethic started creating much publicity and headlines, opening all the right doors both regionally and nationally and offering her all the potential routes to the top of her creative game so to speak. It wasn’t long before Atkinson was exhibiting her collective works both near and far, with her showcasing pieces in Inverness, Galloway, York, London and even Dubai and New York after a while.

Accolades and industry recognition soon followed too, as the Fine Art Trade Guild awarded her with an ‘Exhibition Award’ in 2000, an honour which was picked up by one of the country’s largest fine art publishers, DeMontford, who immediately afterwards offered to represent her professionally and more importantly, commercially going forward. Since then, Atkinson’s amazing collection of highly collectable Limited Edition prints have captivated the imagination of a truly international contemporary art market as each have gone on to sell out in a matter of weeks. As of 2002, Atkinson was nominated for the ‘Best Newcomer Artist Award’ and in 2003 ‘Best Up-and-Coming Published Artist Award’, whilst in 2004 she was named in the ‘Top Ten Best-Selling Living Artists’ by the Fine Art Trade Guild.

There’s no escaping the fact that Atkinson’s mesmerising mixed media paintings have a dream-like quality to them, where the viewer is drawn straight to the fluid surface of the canvas, while her deceptively simple technique combines oils, inks and pastels to shimmering effect. The sweeping lines of the South Devon Coastline are clearly evident in her compelling works too, which is important for Atkinson as she readily admits. Atkinson; “I have always painted with the ambition of escaping into the dream I am creating on the canvas. This private world which drawing and painting offers me is the perfect antidote to real life and one I have regularly escape to since childhood”.

Most recently Atkinson has become Artist in Residence at the ‘Overbecks’ National Trust property back in her native Devon, at Salcombe, where she’s been employed since 2013. What’s more Atkinson has become Overbeck’s first ever Artist in Residence, and has set up her own studio in The Orangery, which is located within the Banana Garden and sits perched high atop the cliffs overlooking Salcombe. Atkinson is tasked with visually documenting 12 months in the garden’s life and times, capturing and preserving the plants, flowers and vistas as they change through the seasons. Speaking of her role here, Atkinson says; “It is a joy to be able to express the sheer beauty of Overbeck’s in my work. It has held a special place for me and my family for generations, as it has for so many of the visitors I speak to who return year after year”, before adding; “Painting ‘en plein air’ definitely adds to the spontaneity of my works”.