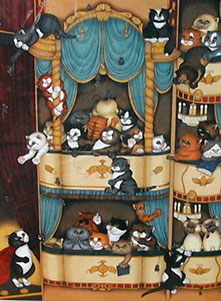 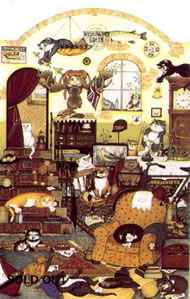 View All Art Works By Linda Jane Smith
They refer to ‘she’ as the cat’s mother. Well they’d be right, whoever ‘they’ are as ‘she’ (Linda Jane Smith) is definitely the cat’s mother. Or their Creator-in-Paint that is. Whole legions of them. As far as the eye can see. Reclining on chase longs at home, experiencing boxes at the theatre, enjoying a trip on a canal boat or riding a Harley Davidson downtown. The complete spectrum of feline social activities caught on an ever-increasing collection of canvases. And all afforded such catchy, witty titles to boot. ‘A Tale of Two Kitties’ anyone? Or perhaps, ‘Mewlin Rouge’ works for you? One of our personal favourites just has to be ‘Fleasy Rider’, yet ‘Catisfaction’ runs it a close second.

Celebrated and much-collected contemporary animal humour artist, Smith was simply drawing-mad as a kid, according to the still paint-crazed adult artist herself. “I’ve always loved drawing, and would enter lots of competitions when I was a child,” Smith says, before adding; “Beatrix Potter was my favourite, and in one of the competitions I had to include all of her animals in one picture, so I put them all in a wood, strolling through the trees and for this I won a book!” Entering drawing competitions were a regular occurrence for Smith throughout her childhood, submitting her creations at every available opportunity.

When Smith wasn’t drawing she’d lose herself equally so in ‘making things’. That ‘thing’ youngsters tend to do when they’re left to their own devices. In Smith’s case this habitually necessitated the use of such materials as felt, beads and anything else loosely described as ‘pretty’. She also was a dab hand at sewing, just like our grans used to be. And those elderly aunties you’d visit as a kid who never married. In terms of Smith’s favoured artistic mediums, these nine times out of ten coloured crayons or pens for artwork, with Smith stressing that this gave her more artistic control and direction over all detailing.

As a 16-year old Smith won a place on the Graphic Design course at Bournville College of Art in Birmingham, and during this higher educational stint gained a variety of new design and illustration skills in which she experimented with and deployed with a pleasing regularity. It was at this very juncture that Smith first experienced the illustrative power of designer gouache, and has having fallen under its spell has been using it pretty much ever since. When she departed Bournville, Smith landed a creative role, not as an artist alas, but as a window dresser; whilst in her spare time she’d busy herself writing stories and painting as this unfulfilled box still needed ticking on a regular basis.

Later Smith arranged for her work to date to be showcased at local venues, and also managed to sell work to the Stable Gallery in London, where she staged her first proper exhibition. Tirelessly though this period in her life, Smith approached art publishers, whilst Birmingham’s Halcyon Gallery showed interest in her works thus far and purchased many examples. In fact, it was this connection which provided the launch pad to her professional art career that she was hankering after, when one of the UK’s leading fine art publishers who work in with the aforementioned gallery requested that Smith produce a set of four small cat paintings on their behalf. Duly obliging, they clearly liked what they saw and thus their art publishing/representing/collaboration began in earnest and takes Smith where she is today.

Inspiration for Smith’s compositions can emerge from literally anywhere, but of course tend to stem from cats first and foremost as you might expect. Smith doesn’t leave her house without her small drawing book concealed about her person on the off chance something or a certain situation which presents itself captures her imagination. She also notes down colours and designs which inspire her for future reference material. Smith also appreciates and has a special place reserved in her art for undisputed British icons; which she employs to devastating illustrative effect in many of her trademark canvases. Think road signs, post boxes and telephone boxes. Only then Smith substitutes humans with cats, queuing to use the phone or lazing around on the sofa eating chocolates. As you do. Smith adds herself; “Photographs are a good source of reference material for me. I use subjects such as the brickwork of an old building or beautiful patterned tiles in fishmongers”.

Smith also collects like there’s no tomorrow. Antique china, beads, vintage hats, purses, fabrics, etc. all of which inevitably turn up in one of her paintings and give viewers another aspect or element that they haven’t observed previously so obviously arrive at the possible conclusion that they are in fact going mad. In Smith’s own words; “I’ve always been fascinated by fine detail; looking at a picture and finding more and more tiny objects that you didn’t notice at first glance; a tiny glass marble, or a bright ladybird under a leaf”. With direct reference to the fabrics, Smith loves old faded fabrics, lace and beaded jewellery, anything really with a delicate nature and a tale or two to tell. This over-riding sense of nostalgia is important to Smith’s approach to her paintings, as she continually strives to recall all of our childhoods, where browsing the Beano rather than the net was de rigour and the only buttons you pressed were located in granny’s button tin.

When Smith herself was young she collected old children’s books and pictures by artists like Arthur Rackham, who did fascinating detailed pictures of fairies, goblins, and trees full of branches with strange faces peering out of every root. It was Rackham’s magical and mysterious images along with fellow artist, Nicola Bailey’s elaborately illustrative work from ‘Tiger Voyage’ which Smith cites as the reasons and point at which she thought she might want to become an artist when she grew up. Describing Bailey’s work as so rich in colour and detail that it’s like looking at a beautiful antique fabric, Smith admits to having collected all of her books, and many other similar titles by illustrators, Kathleen Hale, Kit Williams, and Sara Midda.