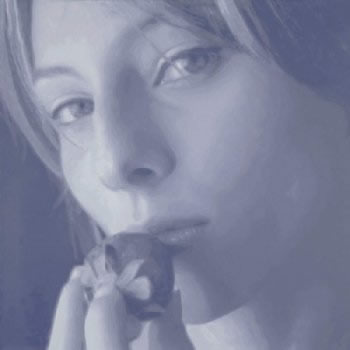 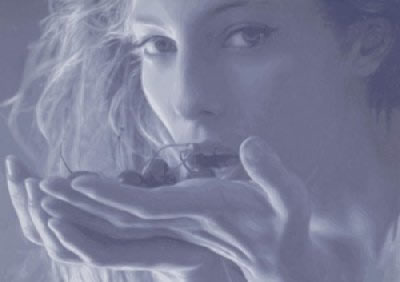 View All Art Works By Mark Holland Hicken
Sensual 65 might sound like a cool 1970s New York-based night club, frequented by the young, free-spirited, achingly hip and undeniably sexy of the art, movie and music worlds, but you might be surprised to learn that it is instead acclaimed contemporary figurative artist, Mark Holland Hicken’s new studio space. Which we rather like. In fact, we believe that more artists should afford their creative bolt-holes a suitably cool title, as opposed to just being referred to as so-and-so’s studio. So why Sensual 65? Well, because the compositions which Hicken is famed for tend to be very sensual, atmospheric pieces. Plus the 65 represents Hicken’s birth year; 1965. Having said that neither his birthplace, Blackburn in Lancashire nor his current postcode in the West Midlands are (with the greatest of respect) quite as glamorous as New York; which we’re sure the good denizens of both locations will agree. So all the more reason to adopt a bit of glitz and style in the latter of the two destinations.

The female form underpins the lion’s share of Hicken’s beguiling illustrative works, and his unique interpretation of it through his spectacular ‘verdaccio’ method of pictorial delivery is something to behold. To understand what we’re getting at, have a peak at Hicken’s stunning ‘Sophia’ painting, in which he pays homage to the silver screen goddess, Sophia Loren. Hicken originated this piece solely to showcase his verdaccio approach to his art, whereby essentially the underpainting is constructed in greyscale so as to highlight all the tonal variations and transparent coloured oils which are then added to the surface, thus creating chroma values to the finished piece. Anyway, we’re getting a bit ahead of ourselves here, as what we really want to know first and foremost is how Hicken got to where he has today. So we’ll begin..

Hicken studied at Coventry University after leaving school, and on graduating in the early 1990s with a 2:1 BA (Hons) Degree in Car and Industrial Design to his name, he secured a ‘placement year’ role with one of the UK’s most prestigious loudspeak manufacturers, ‘Mission’. Hicken remained at Mission for the best part of 20 years thereafter, assuming one position for another, until he was ‘headhunted’ by a rival manufacturer operation within the same industry, and invited to set-up a product design office in both London and Hong Kong. Which, being a bit of a no-brainer, he snapped up and spent the next 4 years flitting between the two cultural capitals and seemingly living the high life.

Eventually though Hicken grew tired of his gallivanting and returned home to resume his calling as a creative at Mission. In the aftermath of a few dropped words and waiting to be asked to re-join ‘the family’ which he’d departed some 4 years previously. Hicken was reinstalled at Mission in the guise of Creative Head, or some such title, the remit of which was to manage the creative side of the business and work to promote the spanking new brands they had on board during Hicken’s absence. 5 years of good money and the manifesting of some great artwork for the company and Hicken arrived at a conclusion which troubled him. In 2001 it suddenly dawned on him that he could paint in all mediums and frequenting any number of materials, was more than proficient in CAD software could art direct photographers and was a dab hand behind the lens himself. Hicken had a full toolbox as it were. All of which made him wonder ‘what if?’

Then something happened. Whilst watching TV he saw a painting of a child, captured in what appeared to be 4 or 5 shades of grey, and on focussing on its conception realised that it appeared just like a contour map, yet when you blurred your vision, the likeness of a child emerged. Having once designed some cartons of a similar visual bent, a new creative spark had been triggered in Hicken’s deep somewhere, and a month later he was inspired enough to experiment with all these ideas spinning around in his head. Sourcing anything and everything from old scraps of wood, an old bed sheet as a canvas, some blue gloss paint and a digital photo of his daughter, Hicken went to work. Alternative work that is. The fruits of his new labour were impressive, despite his daughter presenting John Major’s lip according to Hicken, yet ultimately he was pleased with the initial result. So he produced more.

When he had produced a few he toddled off to an art gallery with his compositions, they liked what they witnessed and a deal was hammered out, culminating in the offering of Hicken’s debut solo exhibition the following February. Providing between now (then) and then (that February) he illustratively engineered at least 14 paintings. He did, and that first exhibition was a roaring success, selling paintings and gaining commissions on the back of it, but then a crisis of confidence kicked in. Hicken suddenly decided that he didn’t actually like his work that much, although loved the time he spent in the studio. It was more a case of disliking the manufactured, digital rubbish (his words, not ours) which put him off. So he stopped painting for three months and panicked. Hicken explains; “3 months in the doldrums is a long time to reflect and soul search. However, my subconscious mind must have been working over-time.” Before adding; “I awoke one morning with the word ‘analogue’ on my lips and I knew precisely what I should do. I started a painting with the usual ‘digital’ base but then let the analogue artist take over. My first ‘transition’ painting was created. My soul lifted and the work sold!” Back on the right path, sighs of relief all around then we guess.

Reinvigorated and pursuing his dream, Hicken’s friend drew his attention one day to the fact that he should look to getting his work published as limited edition pieces, so as to expose himself to a wider audience. Fast forward past a few emails and phone calls, and Hicken found himself with an appointment with Washington Green; the UK’s leading art publishers, who, stunned by his work, signed him up on the spot and opened up whole new, previously untapped markets to Hicken. And that, pretty much, was that.

Hicken champions what he himself refers to as a 21st Century adaptation of the ‘camera obscura’, which translates the details he’s observed in a photograph to canvas, courtesy of a monotone palette. He will then dedicate hours to the considered blending of paint shades before even introducing a brush to the surface area. Hicken describes his studio being more resemblance to a chemist’s laboratory than a place of art at this specific juncture in the creation process. Waxing lyrical about the medium being more like acrylic in compositional terms except for one single atom, Hicken favours vinyl above any other applicative substance, convincing us that the atom makes the world of difference to the finished piece, as it dries with a natural, soft matt finish, which furnishes the study with a cooling quality, indicative if his signature blues, ensuring a desired smooth and velvety texture.

In terms of inspiration, Hicken sees it at every turn, be it a beautiful woman, an amazing sunset, a fabulous animal or in the smile of his daughter. Speaking of his typical approach to his work, Hicken concurs; “If I am painting for myself to satisfy my need, and to present to the world a finished painting from my brushes, then I will always favour a beautiful, elegant and sensual image.I’ll see a story in a corner of either one of my own photographs or one of a colleague, that story will ‘flesh out’ in my mind’s eye, and the blank canvas will begin to ‘call me’. The canvas will call me until I have no choice but to paint the image that I have in my mind”. Having said that, and should Hicken be fulfilling a commissioned brief, the artist stresses; “If you come to me with your commission, I will talk to you, listen to you, look at your photographs, and then mull the whole thing over, until I have the ‘story’.Once I have the ‘story’ then I turn your image into one of my paintings”.