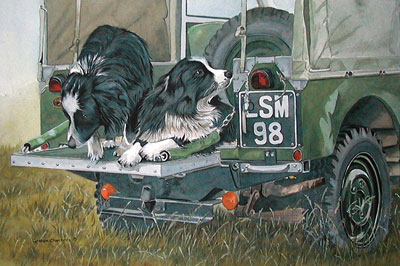 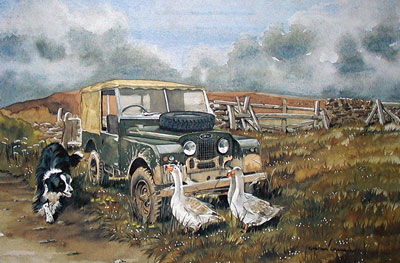 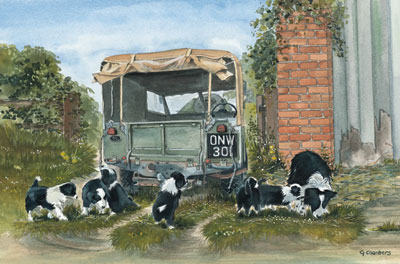 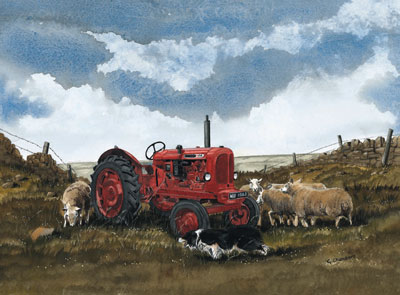 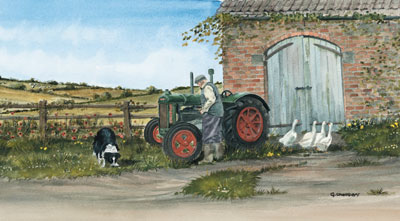 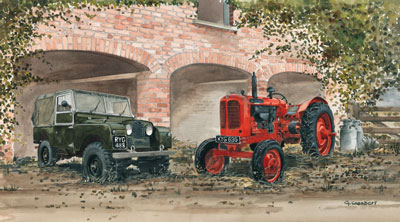 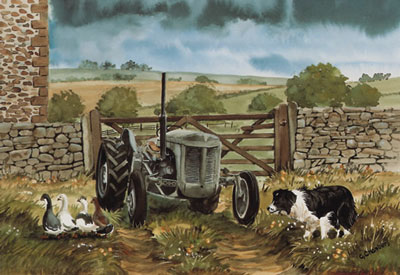 View All Art Works By Graham Chambers
Graham Chambers is a successful agricultural theme artist; in as much as he’s your ‘go to’ man should you be in the market for a picture perfect composition of anything rural-based. Be it old Land-Rovers, tractors, collie dogs, traditional farm dwellings, livestock, etc. In fact, anything remotely ‘working rural’ in terms of still life and landscapes are covered with startling attention to detail by Chambers, and have been for the past couple of decades now.

Officially referred to as a Vintage Tractor and Farming artist, Chambers was born and bred in Hull in 1953, and after a pretty unremarkable upbringing left school at the age of 16 to work in the print industry. This environment exposed a young and impressionable Chambers to a diverse cross-section of popular, household name artists, whom he was tasked with producing fine art prints (of their original works of art) for. Chambers stuck at his 9 – 5 for the next 20 years, and his own first brush with artwork arrived in 1993, when he was in receipt of his initial watercolour set and a No.3 Sable brush, according to his nearest and dearest.

As with any artist, Chambers needed a subject matter, and like any other artist before or since, that historically means being inspired to commit paint to canvas by something familiar to you. Something, normally familiar, which has moved you sufficiently to interpret what you see in paint. Or whatever other medium you so choose. In Chambers’ case his muses were something very personal to him and close to both him and his wife’s heart. Border Collies not to put too finer point on it. Chambers’ you see, had spent many years lending his wife, Sue a hand as she went about her hobby of showing and breeding her beloved breed of working dogs. This love (and commercial furthering) for their dogs also stemmed from teaching the dogs the herding skills which of course are instinctive in the breed, and in the Chambers’ case meant sheep and their now native North Yorkshire as the other integral components.

Aside from the Border Collies, old tractors and Land-Rovers also served as a constant source of creative inspiration at the same time, and again, found in plentiful supply in varying states throughout their natural rural/agricultural habitat in the north of England. Chambers’ felt that there was a story to tell in these inanimate objects as well as those a lot more animated, and set about cementing the likeness of this selection of traditional rural scenes as his passion and skillset developed.

Since his first coming as an artist, Chambers dedicated the next 15 years to travelling the country extensively, attending craft fares, steam rallies and a plethora of county shows, where he’d pitch a marquee and showcase his compositional wares to an appropriate county-loving audience. Chambers speaks of exhibiting and selling his pictorial debuts and then successive individual and collection pieces thereafter, and in the process meeting the acquaintance of some lovely people, not just from these shores but from far and wide; all showing more than just a passing interest in his visually uplifting and time-and-place capturing illustrative stand-firsts. Indeed, Chambers’ original paintings have found new homes in New Zealand, Australia, America, Germany, the Netherlands and Ireland, with Limited Edition prints being purchased a field as Japan.

Today Chambers - or moreover, his signature work – is universally recognised by the industry and his legion of fans which he’s accumulated, and is noted as a highly regarded watercolour and oil practitioner, as well as greetings card designer, on account of the collaborations which he has enjoyed in this commercial area, and which have ultimately seen a number of his original studies of agricultural life and times depicted on popular greetings card covers.