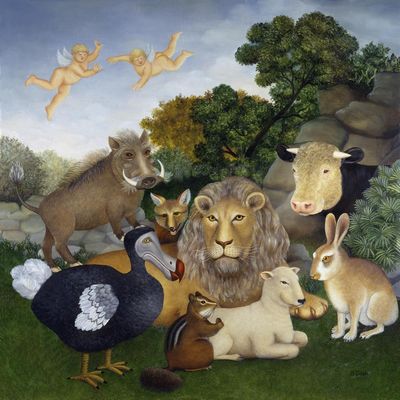 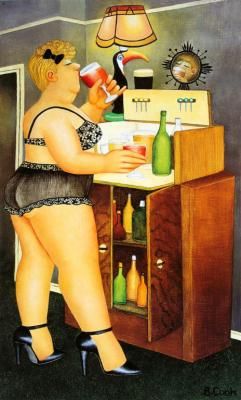 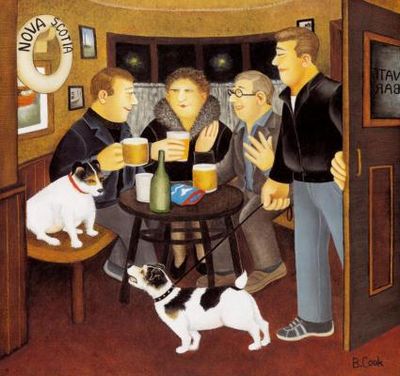 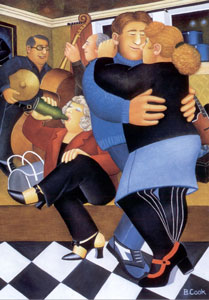 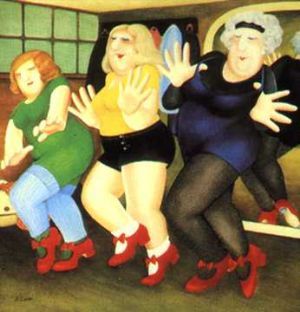 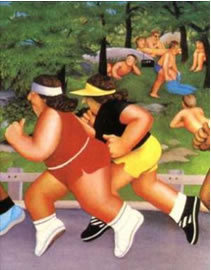 View All Art Works By Beryl Cook
Devonian contemporary humorous figurative artist, Beryl Cook was often overlooked, and sneered at, by snobby art critics who would regularly fail to take her art seriously, yet this didn’t stop the prolific comedically observation brushsmith from being universally loved and collected by her army of loyal followers over the years. indeed, Cook was snubbed on many an occasion by some of the nation’s most prestigious art galleries and venues as many viewed her rowdy, socially-inclined, people-watching art with borderline disdain.

This sorry state of affairs was heightened in 2007, and a year before Cook’s passing, when London’s iconic Tate Modern art installation refused to showcase any of Cook’s, yet were more than happy to instead mount an exhibition, which cost thousands of pounds, based around a can of conceptual human excrement, if you please. Cooks fans rallied around her and launched a campaign against the Tate immediately afterwards. Speaking at the time, a relatively unperturbed Cook reflected; “I don't see the point, actually," before casually adding; “What would they do with one of mine I ask you. And anyway, how can I compete with tins of you know what! Unless I paint them!" For Cook’s part, it was always about the enjoyment they bring to others which thrilled her most, and never the idea of her paintings simply hanging in a gallery, major or otherwise.

Residing in Plymouth on England’s south coast for much of her life (and where she passed in May 2008), she made no bones about the raft of her lively, full-coloured and illustratively raucous being routinely based on some of the larger than life characters whom she witnessed daily in and around her native Plymouth. Although Cook considered Plymouth her adopted home for the majority of her life, she was actually born in Surrey in 1926, yet showed no signs of artistic promise during either her childhood or formative years according to those close to her. In fact, and so the story goes, Cook didn’t experience paint for the first time until she encountered her son’s paint set when he himself was a youngster. Cook certainly made up for lost time however, as she then pretty much dedicated the next 40 years to her new found appreciation and love of art.

When Cook relocated to Plymouth, her and her husband John ran a busy theatrical boarding house, and it was in this unforeseen environment when her gift as an artist was first observed and then nurtured. Essentially Cook would spend her spare time secretly sketching many of the flamboyant guests who would board and lodge with Cook and her husband during this period of their life, and then when the compositions were finished (and the lodgers having upped and left we should imagine), Cook would hang them from the walls of the guest house. This in turn created limitless talking points with guests that followed, each commenting on the paintings which met their gaze.

Those very first images were crafted on driftwood canvasses, which Cook had sourced from the nearby beaches, as well as even less conventional surfaces, such as random pieces of wardrobe, or lavatory seats. Basically anything she could lay her hands on lying around the house. Yet despite the questionable presentation, there was clearly much in those initial images which attracted compliments left, right and centre. Keen to further Cook’s cause and help her gain the exposure a friend thought Cook deserved, they persuaded the budding artist to try and sell some of her new paintings; and much to Cook’s surprise, they met with instant approval and sold out in next to no time at all. Completely self-taught, Cook approached each individual picture in a meticulous and methodical manner, and most of the time they’d start life as scribbled little sketches hurriedly etched on card, masked by the cover of her handbag; just bearing enough details on which to take away and construct a future illustration from. Cook would then dedicate weeks to committing these elaborate compositions to her canvasses, and would strictly adhere to her principle of never painting anyone who wasn’t perceived to be having a good time.

In a 2006 interview she had with the BBC, and when pressed on the preferred
Emotional state of her pictorial subject matters, Cook responded; "I'm only motivated to paint by people enjoying themselves. If I saw something sad I wouldn't dream of painting that”, going on to add; “It wouldn't mean anything to me to paint it. I might feel sorry for them, but I certainly wouldn't want to paint it”. Continuing in this same vein, Cook also conceded; “I love it when I see people enjoying themselves. I'd quite like to be the one singing and dancing drunkenly in the middle of a crowd!"

Another plentiful source of subject matter for Cook was the pub, and away from the guest house, she and her husband would often frequent the Dolphin public house located at the town’s Barbican, and it was this establishment which also afforded the almost reluctant artist an infinite collection of potential muses. OTT, nearly caricatured folk who’d come and go and prop up the bar in Cook’s presence – which for the record was merely a few hours on a Friday evening apparently – would provide a constant source of both entertainment and visual magnificence to Cook’s freshly, artistically-geared mind. From sailors on shore leave to prostitutes touting for business, Cook was, graphically, spoilt for choice.

Cook herself however was the polar opposite of her painted ladies and other worldly characters, and although not quite a shrinking violet was definitely shy and had no compunction to grab the limelight herself. To this end, Cook made a point of never attending any of her own gallery openings over the years, and didn’t feel confident enough to even visit Buckingham Palace to receive her OBE. Cook’s first exhibition took place in 1975, with the stage being The Portal Gallery in London, who she maintained a working relationship with for a number of years thereafter. From thereon in, Cook’s artistic work went viral. Or whatever the comparative reality course which then followed, as opposed to the virtual reality counterpart of today. Suffice to say that Cook’s work has appealed to an adoring public far and wide over the years – irrespective of a section of the contemporary art world’s altogether snooty stance – and have been known to exchange hands for up to £40,000 at a time.

Cook admits she was always drawn to scenes that she herself described as being peculiar to British working life, and to what she coined as ‘treats from the streets’. Although perhaps frowned upon by society today, Cook would absolutely relish the opportunity to paint what she referred to as; “Those big fags” and how she; “Loved people smoking all around me”, as was once a familiar sight in pubs and bars. In acknowledgement of Cook’s enduring pictorial creations, in 2004 the BBC commissioned a special two-part animated series based on Cook’s boisterous and brazen characters, entitled, ‘Bosom Pals’.