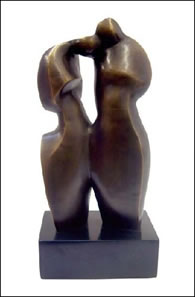 View All Art Works By Sam Shendi
It’s fair to say that Egyptians know a thing or three about monumental construction, as certain physical evidence found at various sites of historical significance both outside of Cairo and all down the banks of the River Nile support; in terms of pyramid-shaped creation. Or just simply, pyramids. So perhaps it was written in the stars (or etched onto the interior walls of pyramids) that Egyptian-born contemporary sculpture artist, Sam Shendi would become what he’s become, professionally speaking.

With an impressive educational background forged in Monumental and Architectural Sculpture, it’s no surprise to learn that Shendi’s pivotal creative work fundamentally explores the relationship between vertical and horizontal along with examining the critical support role played out by the introduction of gravity itself; whilst all the time running the rule of the human figure. Pretty heavy stuff, eh? Shendi identifies with and acknowledges the seeming tension discovered in the most modern sculpted forms, which despite their moderate size brandish a willingness and desire to evolve into even larger constructs or monuments, which in some cases are almost snapping at their leash to be pitched at the centre of a cityscape, rather than found on the periphery as they are often cast. Which again, sounds pretty hardcore, but isn’t necessarily the case when you strip it back.

Growing up in a small village situated in the north of Egypt, Shendi went on to study at Helwen University of Fine Arts in Cairo, and graduated from this respected seat of higher educational learning with a first class honours degree in Fine Art, having specialised in Sculpture in 1997, before embarking on various creative positions, including roles as a fashion designer, interior designer and also 3D cartoonist, until he launched his own interior design business. Shendi moved from his native Egypt to the UK in 2000, after deciding to turn professional with his art, and settled in North Yorkshire, with a view to giving himself much better possibilities of selling his paintings and sculptures. Shendi’s confidence paid off, and it wasn’t long before commissions from local people followed.

The nucleus of Shendi’sworks of sculptured art are never far removed from those bastions of Egyptness; history, durability and beauty, a triumvirate of factors entrenched in his signature works. In fact, for a large part, Shendi’s country of birth – and its stunning history – appears to have influenced his personal creative odyssey, either consciously or subconsciously. From the simplified geometrical forms harboured in his sculptures to the oft-masked symbolism observed co-existing within the parameters of his strictly three-dimensional pieces; such as obelisks, sun-balls or golden eggs. To reinforce this, Shendi’s most recent work has also toyed with illumination in bright primary colours.

Scrutinising Shendi’s sculptured art further and we can’t help but be drawn to the rules of mathematical proportion, which of course was found at the literal cornerstone of every pyramid back in the day. A very long ago day, admittedly. Shendi’s typical work is both perfectly balanced and weighted, with its origins found very much contained within the law of the ‘Golden Section’, or if you prefer, ‘Divine Proportion’. Continuing this theme, and the artist himself affords us further insight into his works with the following statement of intent; “Verticality and horizontality constantly challenge gravity, which is systematically controlled by the sequence of Fibonacci’s code. The works are uniquely bold and playful which interact with the viewer, like star gates they project you into a different world, one that is never hostile”. Shendi adds; “It’s like being held in a brightly-coloured, friendly embrace.”

So, what of the materials which Shendi frequents to convey his creative message to society. Steel and metal are key components, and dating back to his student days Shendi has always been fascinated with the exploration of steel as a medium, normally utilising scrap metals and discarded car parts for his breadth of work to date. Indeed, Shendi’s most recent compositional forays have resulted in steel fabrication, which manifest themselves in perfected angles and streamlined perspectives, with Shendi keen to stress that steel, when manipulated by the presence of light, promotes an almost weightless look and general ambience to the individual study, effectively impervious to the power of gravity. The overall optical impact is heightened by the injection of colour which deceives the eye into routinely thinking that gravity plays no part in the physical construct on which you look out upon. Akin to 1970s masters of Minimalism, Donald Judd and Ellsworth Kelly, Shendi’s sculptures are presented as 3-D pictures which contain linguistic loops from Brancusi and Gerrit Thomas Rietveld, once they’ve been exposed to the conceptual remix of Shendi’s visual poetry in perpetual motion.

Wit as well as mathematical, cultural and historical wisdom also aligns in perfect symmetry when eyeing up a Shendi sculpture, as he habitually adopts a twist or subtle element of fun and perceived playfulness in their eventual manifestations. But it’s the sense-persuasive art of abstraction which colours the majority of Shendi’s body of work, whilst his most recent outings have flagged up a very strong and deliberate modernist influence that’s clear to see from the outset, as his studies evolve into simpler and simpler sum parts of an efficient total. In conclusion it’s clear to see that the final finished works take a fine line between representation and abstraction, stripping human nature down to its essence, and then expressing it in a sculptural language. The one recurrent theme in all of Shendi’s sculptured pieces is the human being itself. Or rather, our emotions and the stimulation of our senses per se by confronting us – irrespective of our individual tastes, ages or cultural backgrounds – with a message to view and review our actions.

Shendi still also has his own Interior Design company in Hurgarda, located near the Red Sea back in Egypt.