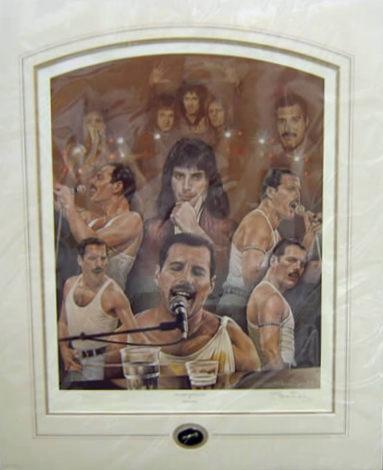 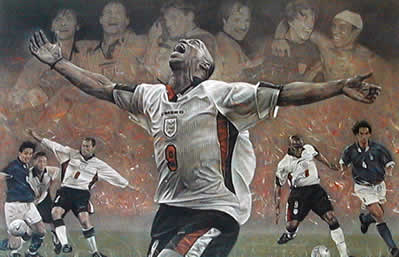 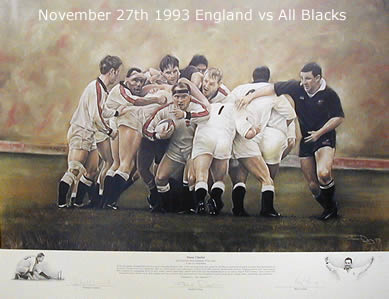 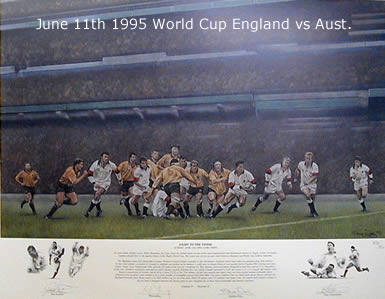 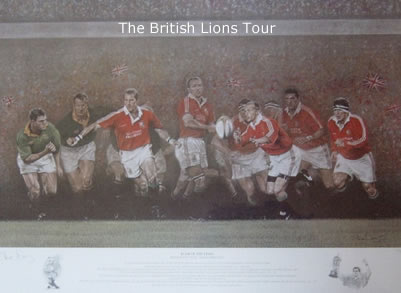 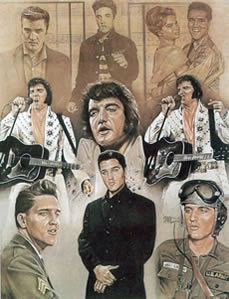 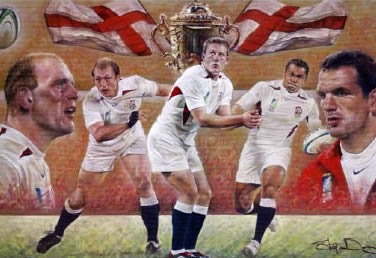 View All Art Works By Stephen Doig
Acclaimed and much celebrated contemporary sports and figurative artist, Stephen Doig successfully combines his clear love of sport with his candid love of art, a match made in heaven many of you might concur. Although there’d be no ‘might’ about it when you clapped your eyes on Doig’s supreme works of sporting art which he’s compiled over a 20 year career as a professional fine artist. During these two decades Doig has commemorated on canvas some of the most momentous global sporting achievements ever witnessed and which many of us were privy to either in the flesh or whilst sat in front of our TVs. Like, for example Manchester United winning their famous treble of European and domestic silverware in 1999, the British Olympic team’s ‘Super Saturday’, F1 star Jenson Button becoming the 2009 Driver’s Champion and most recent of all, Andy Murray finally lifting the famous Wimbledon trophy aloft after his 2013 Men’s Singles title victory. Doig’s captured them all for illustrative prosperity as part of his astonishing back catalogue of sporting pictorials.

But there’s more to Doig than merely immortalising the mortal combatants and teams which have caught the mood of one generation and inspired another, as the artist has also cemented the likeness of some of music’s legendary acts in his own inimitable artistic style for us all to pore over and marvel at. From icons of yesteryear who need little introduction such as Elvis Pressley, Bob Marley, John Lennon, Frank Sinatra and Eric Clapton, through to stars from today and tomorrow, including Adele and Paul Weller. What’s more (much more in fact), Doig has created one-off compositions featuring household name political, historical, religious and royal figures which ensures that he’s not just a massive sports fan.

Born in Oxford in 1964, Doig immediately showed more than a passing interest in art from a young age, as he drew and painted at every opportunity.
A self taught artist, Doig has healthily explored many techniques over the years to refine his own unique style, while the decision to add colour in the form of pastel to early pencil sketches literally transformed his drawings into the highly finished and accomplished paintings we instantly recognise today. On leaving secondary education, Doig joined the Army, after which he held down a number of different vocations before finally arriving where he wanted to be; as a full-time professional artist. Doig’s dramatic life studies harness the visual essence of skill, movement, speed, awareness, contributing, believing and winning at any given sport, as he’s succeeded in merging his twin loves to critical acclaim down the years since turning professional.

Having for the most part resided and showcased his individual works and pictorial collections in both Oxfordshire and Warwickshire, home is now the beautiful rolling hills indicative of the Scottish Borders for Doig these days, and on account of his quality of work is widely regarded as one of the UK’s foremost contemporary sporting artists. Not only is Doig’s signature works of art collected by private collectors, but countless players, teams and fans of various sports have snapped up his finest creative hours; captured in his trademark pastel. Doig’s unique and roundly applauded skill-set is the way in which he instils this acute sense of movement, power and passion found within the very root of athletic endeavour and triumph.

In 1997 Stephen Doig was awarded the title 'Best New Artist of the Year' by the Fine Art Trade Guild.