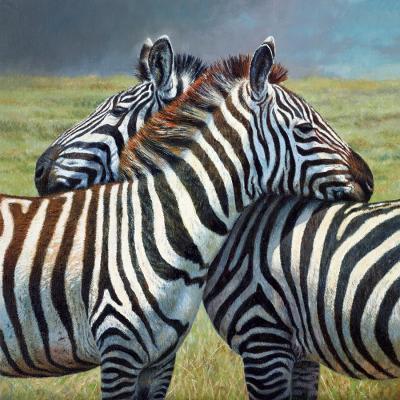 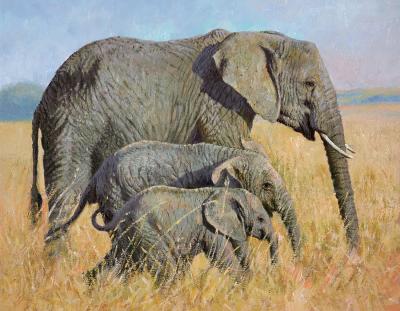 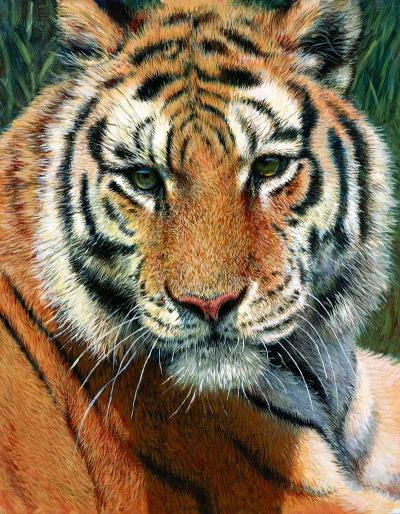 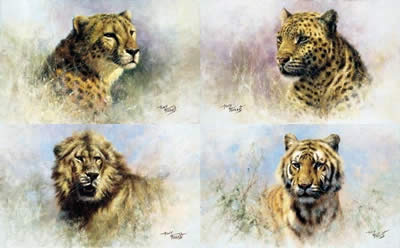 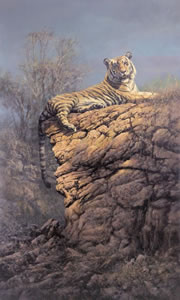 View All Art Works By Tony Forrest
There’s photo-realistic art and then there’s photo-unbelievably-realistic art, which is where hugely popular contemporary wildlife artist, Tony Forrest comes into illustrative play. Or rather, comes into his very visual own. Long regarded as one of, if not THE finest living wildlife artist based here in the UK, Forrest’s towering pictorial portrayals of some of the world’s most awe-inspiring animals and creatures of the wild have been exhibited at some of the most prestigious venues across the globe. Aside from in his native Britain, Forrest’s signature work boasts a huge following on the other side of the Atlantic Ocean too, with his American fans regularly clamouring for his latest releases, with the influential Safari Club International Wildlife Convention in Reno, Nevada USA being a particular home from home for Forrest on the occasions when him and his work travel stateside.

Having been painting for over a quarter of a century now, Forrest has been fortunate enough to have visited a host of both beautiful and fascinating locations during this time, in his search for that perfect shot. Or rather, ultimately, that perfectly painted picture representing his favoured subject matter in a peerless light and composition. Ever since he was a child Forrest has been equally captivated and led by art and nature, and it was inevitably only a matter of time before these two path crossed, career-wise, which would in itself enable Forrest to answer his undoubted calling in life. The raw and un-compromised emotion that Forrest feels for these two passions is there for all to see when confronted with one of the critically acclaimed wildlife artist’s pivotal pieces, with what appears to be every brushstroke having been committed to canvas with the very same consideration and belief that he was charged with retelling a specific story; visually documented within the confines of that individual frame.

Forrest’s favourite haunts, in terms of research and where he ensures he has the necessary time to work, rest and play, are the two very different continents of Africa and India. A champion of painting at the scene, or ‘en plein air’ to coin the appropriate fine art industry terminology, Forrest has had the pleasure to witness a plethora of instantly recognisable species in their natural habitat, and indigenous of the breathtaking vistas on which he’s walked, sat and most importantly, painted. From lion and tigers in India to mountain gorillas and elephants in Central Africa, Forrest has been permitted access to countless African wildlife parks which have allowed him to capture the very likeness of these amazing creature up close and relatively personal. Perhaps too proximate for many of us, yet essentially affording Forrest a ringside side enabling him to create the graphic performance of his life.

Talking about what he strives for as he approaches and executes each composition, Forrest claims that it’s overall visual impact which drives him and as such remains the key element of his traditional works to his mind, despite administering an extraordinary degree of elaborate detail and keen accuracy to the sum parts of the gargantuan piece. In Forrest’s own words, he implies that; “Looking a painting should not be an intellectual pursuit, but rather should bring the viewer face to face with the realities of the natural world”. Hailing from the West Midlands, originally, yet now having since put down roots in Cornwall, the sub-continent is a far cry from Forrest’s childhood, enjoyed in the geographical centre of England, yet it’s clear to see his adopted land means so much more than just a constant and rich source of illustrative material and inspiration to him.

That’s underlined by Forrest’s commitment to wildlife and conservation causes and associated campaigns instigated in Africa in particular, which for his part has seen the artist raising much needed awareness and the all-important funds requires to protect endangered species across the world, with a great emphasis on Africa and India. He’s done this by auctioning off many of his paintings which have been sold for thousands of pounds, accummulatively, with the proceeds going straight to the coffers of worthy organisations such as the Born Free Foundation, ‘Africat’ in Namibia, the Tusk Trust and others besides.

Away from his charitable donations, and Forrest’s private commissions have included two for the British Army Air Corps, one in Germany and the other shortly after the conflict in Bosnia, whilst Forrest also spent a week living in the old war zones in the company of the services on both the ground and in the air, which enabled Forrest to complete his creative briefs. In something of a departure for Forrest, the two studies – which incidentally hang pride of place in the Officers’ Mess at their regiment base in Hampshire – are of a Lynx and Gazelle helicopter.

That’s the thing with Forrest though, he doesn’t consciously restrict himself or put any illustrative barriers to the images he creates and is prepared to create for whatever audience requests it, and will address each subject matter with the same gusto it would appear. Forrest confirms this when he comments; “I am driven by anything that is visually powerful. I have a huge passion for art and love to create a tactile picture with the textures I obtain from oil paint”. He goes on to add; “In many cases, it is the art itself which is the big attraction - animals being the main part of the story. One thing I have never lost is my own self-belief. I love what I do and I believe that all challenges in life are put there to make you stronger”. And that’s certainly an outlook and approach to life that you could argue with.