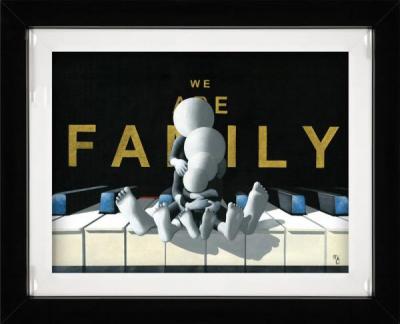 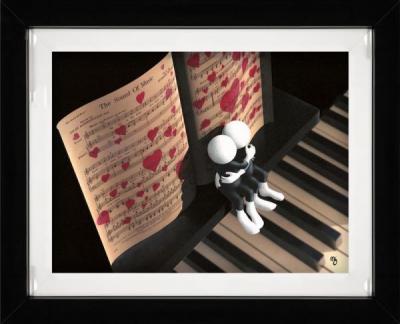 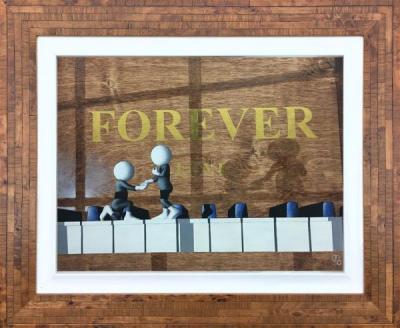 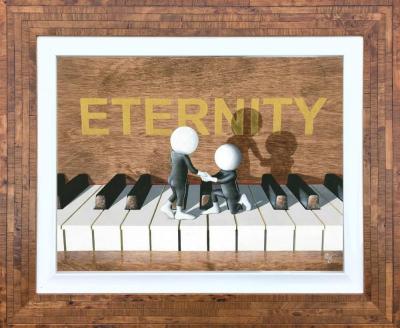 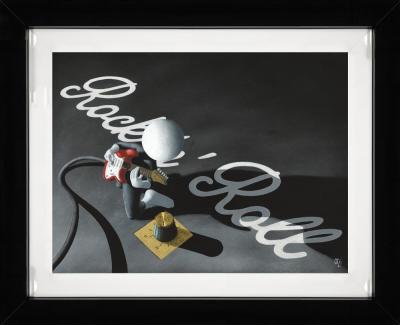 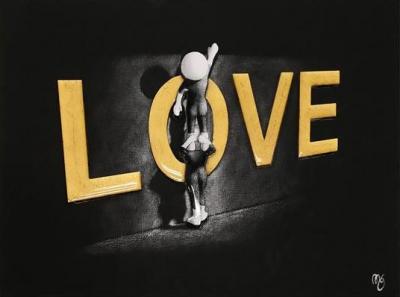 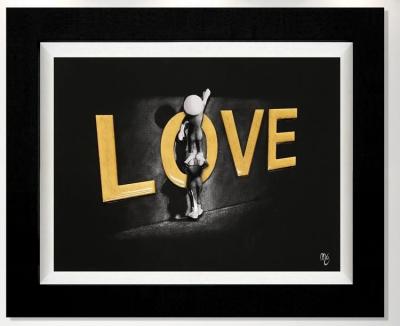 View All Art Works By Mark Grieves
If you’ve got a penchant for loved-up, lovelorn or just lovely little characters and/or classic pianos, then you’re just gonna, er, love Mark Grieves’ trailblazing contemporary art. Harking back to a forgotten time of black and white, music hall romance and beautifully crafted and enduringly timeless songs dedicated to affairs of the heart, Grieves’ modern take on a once familiar theme will make you feel all warm and fuzzy inside. Trust us on this. All blessed with affectionate and enticing titles such as ‘First Dance, I’d Do Anything for Love, The Entertainer, Harmony, Rhapsody’ and ‘Serenade’, pretty much each and every heartfeltedly illustrative piece is finished off with his now trademark figures. Be they tripping the light fantastic, having one last tango in (possibly) Paris or hitting all the right notes during a blossoming relationship, Grieves’ symbolic figures are key (if you pardon the pun) to every accomplished visual piece conveying the underlying message.

The finesse and classic silver screen quality and pathos found at the core of a typical Grieves pictorial piece is in seeming sharp contrast to his own days of yore, which were (with the greatest of respect) served light years away from where he’s at on his hugely popular canvases which have shaped his here and more recent, now. Despite a childhood filled with happy memories and blissful, adventurous days constructing stream-straddling tyre swings, plotting ‘dodgy deals’ on BMX parts and playing footie until his legs stopped working, it was all set against a heavily industrialised and oft grey backdrop of a 1970s Tyneside. Born in North Shields in Newcastle-upon-Tyne in 1971, Grieves’ father did what most fathers, friends’ fathers, grandfathers, uncles and elder brothers did at the time; work in the local shipyards that lined the banks of the River Tyne – the lifeblood of the North East back then. As we’re all too painfully aware, all that remains of these once proud hubs of the community are the fading ghosts of abandoned and decaying cranes and long redundant sheds. So as we hinted, a far cry from the ivory towered subject matter of his present day artistic incarnations.

Or was it, as his school reports tell a different story and give us an insight into the mind of a young Grieves with transient thoughts drifting far and wide. And well away from the stacked chimneys and darkened shadows cast by the humongous factories and shipyards. Those school reports confirmed an unwillingness to concentrate on the subject in hand, with frequent use of the line, “Mark is a dreamer”. And if he wasn’t putting his dream-like visions to good use in art class, then odds were his mind was wandering in the more academically-led lessons too. Of course, some progress in this future, potentially starred line might well have been hindered by choosing to have fisticuffs with Grieves’ art teacher. Which resulted in him being locked in the stores cupboard until such time as he calmed down and facing up to expulsion from school. And they wouldn’t be wrong, as Grieves’ ambitions to go to art college were dealt as bigger blow as he afforded his unwitting art teacher as he was knocked back on account of his subsequently thin on the ground portfolio of work. And probable negative reference from said teacher.

Fortunately for Grieves, an art foundation course’s loss was photography’s gain, as instead the budding artist/yet now promising photographer found his way into a photography career. Grieves spent many years successfully pursuing this, and concurs that there are many cross-fertalisational skills and creative attributes that have transferred from one creative discipline to the other in latter years. In Grieves’ mind, the objectivity required in gaining an eye for a photograph is identical to the very same eye needed to imagine the subject matter on a hitherto blank canvas staring back at you. And in compositional terms, he’s got a point. Furthering this notion, Grieves adds; “To create an image, where the viewer can immerse themselves fully into the picture, enabling them to imagine being there is immensely satisfying”. Before going on to remark that: “The ability to remember dreams which go as far back as my childhood also plays a big influence in my art. It’s like a slideshow reference library that I can call upon at any time”.

Anyway, somewhere down the line Grieves made the transition from accomplished photographer back to budding artist; only dropping the ‘budding’ bit and finally making it in the arena he’d wished to from his school days. And might have done much earlier had he not got too physical/been misunderstood as a surly teenager. With the passing of time though, Grieves has noticed how certain elements have changed. Not least his initial approach to his art. Where once he considered himself a prolific preliminary sketcher – especially as a keen child artist – Grieves on his return adopts the opposite approach, choosing alternatively to create the image directly onto the finished canvas rather than create a series of sketches beforehand. Perhaps this is because the whole process is a laborious one when you choose to facilitate oils as your chief medium which Grieves habitually does these days. Speaking of his prep work in relation to his art, Grieves outlines the following routine; “Initially I will lay the canvas out onto the floor and ‘go at it’ for hours, filling the canvas with geometrical lines and shapes, working out where shadows will fall and experimenting with random colour tests.” The artist then admits that; “Once I am happy with the layout, I start building up layers of colour and improving areas that aren’t quite working in harmony”.