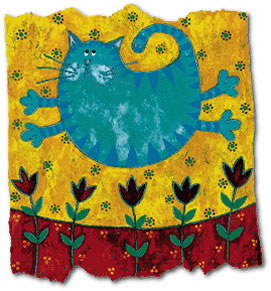 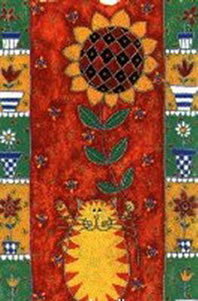 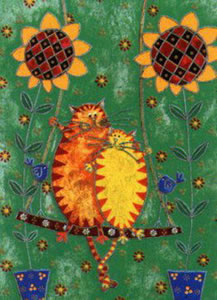 View All Art Works By Helen Rhodes
Helen Rhodes is not your ordinary, average, every day contemporary artist. Far from it in fact. OK. She clearly paints, with these usually illustratively manifesting themselves as trees, flowers, animals (typically all manner of birds), wildlife-y scenes and landscapes. All committed to her canvases in her own inimitably quirky and fresh contemporary abstract styley. Which we greatly applaud. However Rhodes’ visual talents don’t just begin and end there, as when she tears herself away from the easel for more than five minutes the hugely popular and multi-talented artist turns her creative hands to other, alternatively artsy things. And we mean ‘artsy’ in a good way, not a quaint, mocking way before you jump to any conclusions.

For a start there’s Rhodes’ nifty commercial line in greetings cards. Although admittedly they’d probably be roughed out on the same drawing board we guess. But then there’s the porcelain brooches, china and range of textile creations which divide Rhodes’ time and prove beyond any doubt the originality and versatility of the artist to our mind. The greetings cards are like nothing you’ve seen before, beautifully hand-crafted illustrations for receipt on any given occasion, whilst Rhodes’ unusual porcelain brooches stand as works of miniature, intimate art in their own right. The china range offer clean lines of un-fastidiously presented and unpretentiously designed tea cups and tea pots first and foremost; all depicting Rhodes’ default cuter-than-cute animal-based artistic settings. Tea towels, canvas shopping bags and the most gorgeous hand-knitted owls you’re ever likely to witness, comprise Rhodes’ bespoke textile section.

Born in Staffordshire in 1970, Rhodes went on to study for a degree in Textile Design at Loughborough’s College of Art, from where she graduated with a first class with honours in 1992. In terms of her interest in painting, Rhodes admits that this pretty much played second fiddle to her love of woven textile designs and implies that originally it was another creative discipline she invested time in purely to support her main course. Ironically though, it was the painting side of things in which Rhodes would eventually start waves with in the public eye. Indeed, Rhodes believed that her best route to commercial recognition, and therein being able to pursue a professional career in the contemporary art world, would be courtesy of her burgeoning illustrative streak, as opposed to her textiles.

Since 1994 Rhodes has successfully managed to sell her original compositions via galleries and art venues across the UK, while she did her growing reputation for commercially-viable creativity no harm at all by then winning the Imperial Cancer charity’s card competition two years on the bounce around this same time. This major fillip provided Rhodes with even more motivation and encouragement to make a go of it, and she then made it her business to secure a publishing deal with a greetings card publisher to advance her causes in this particularly lucrative line. In the end Rhodes bagged a number of separate deals through various publishers, all keen to represent her in that specific department and collaborate going forward.

A couple of years on and Rhodes hit the big time as it were and finally received the due recognition that her unique brand(s) of artistry demanded, when she was signed up by one of Britain’s most prominent fine art publishing houses, DeMontford Fine Art. This partnership was sealed in 1997, and so as to underline the strides she’d already made in the industry – and to point to things that would follow – Rhodes was not only nominated for, but awarded the prestigious ‘Gift of the Year’ title from the Fine Art Trade Guild in 1998. This was followed up barely 12 months later by being bestowed with the honour of ‘Best Up and Coming Artist’ by the same awarding body in 1999.

Describing her work to those who are perhaps not overly familiar with it, and Rhodes explains that it traditionally fuses intensely rich hues and saturations of colour, texture and patterns with what she refers to as naïve compositions. By which she alludes to the vast majority of her original compositions being visually noted for having torn edges, a feature which she insists hints that each individual image is a fragment of a larger painting, which she hopes affords the piece an element and further appeal of preciousness. In Rhodes’ own words, she adds; “Richness of my mixed media work is achieved through a lengthy process involving different techniques and paints. The extra depth of colour is given by a final layer of varnish”.

In 2003 Rhodes opted to take a year out in order to start a family, only returning to her art in 2004 where she concentrated on hosting her first solo exhibition at Leicester’s the Frog and Mouse Gallery. In 2006 Rhodes decided to go it alone in terms of her publishing too, feeling better placed to undertake this responsibility than perhaps she had previously, and as a result of this decision she’s overseen countless original pieces reproduced in giclee format as small, limited edition pieces. What’s more, Rhodes’ designs have gone from strength to strength from the greetings card perspective, as blue chip clients such as The Art Group, Art File, Pictura and Woodmansterne have been consistently using her designs in mass-produced ranges. Yet in 2011 Rhodes also looked to self-publishing a range of cards for herself, which today she offers through her website and selected galleries and shops here in the UK.

Meanwhile Rhodes’ ‘Birdy Hedgerow’ – which essentially stands out as her signature textile design brand – has gained the artist something of a cult following, as she presses ahead with her fabric designs, which of course harks back to her college days and her first creative love as such.