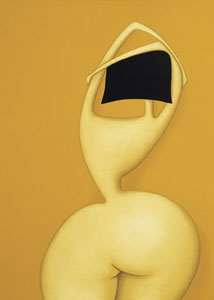 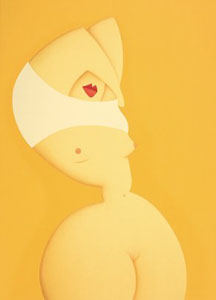 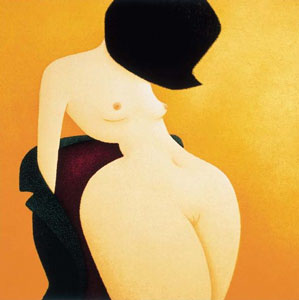 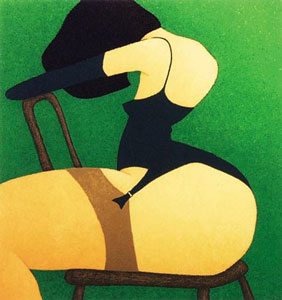 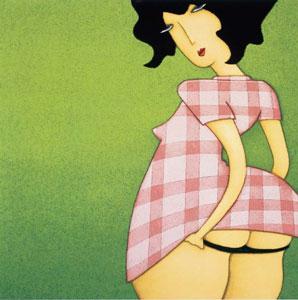 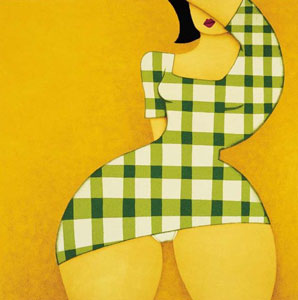 View All Art Works By David Laity
If you like your contemporary art somewhere between Beryl Cook and notorious Pop Artist, Jeff Koons’ ‘Made in Heaven’ series, then chances are that you’ll just love Australian figurative/humourist painter, David Laity’s back catalogue of compositional pieces. Part stylish, sophisticated, avant garde art, part end of pier show poster (and we’re thinking along the lines of Chubby Checker here), part Moulin Rouge back stage shenanigans, it wouldn’t surprise us if Ron Jeremy’s head suddenly popped up in one of Laity’s graphically explicit, yet always tasteful and family-friendly, works of art to be perfectly honest. Not that we’re implying there’s a seedy underbelly to the Aussie’s vivid, bold and engaging illustrative endeavours, just that they wouldn’t necessarily hang from Sunday School walls. And that’s because for the most part they tend to depict voluptuous, provocatively-posing, semi-naked women (albeit with 1920’s flapper girl hairstyles?!)straddling furniture. Want to know more? Of course you do, so read on….

Laity was born in Wangaratta in Victoria, Australia in 1958 and received schooling in Benalla from 1963 onwards - including attending the Benalla Technical School between 1970 and 1975 - after which he decided to complete his apprenticeship in Motor Mechanics to get a recognised trade under his belt. However Laity turns his back on mechanics and instead takes up cartooning, shortly after returning to a further educational surround and completing a Drawing course at Shepparton Technical and Further Education College in 1986 to refresh himself, before going on to create and establish a regular and successful comic strip, ‘Rat Race’ for publication in his native Australia. Based in Perth and originating and drawing daily for eight years, Laity evolved his cartooning so as to include single frame and full colour work, which proved universally popular with his loyal audience both in Australia and overseas at this time. Laity resisted any urges to be political in his comic strips during his early years, stating; “I have deliberately stayed away from political cartoons as I don't like the idea of my work being topical one day and old hat the next”. Fair dinkum.

In 1993 two, possibly unremarkable things to the casual observer took place in Laity’s life, as he married his wife, Regina and decided to take up oil painting. Coincidence? Maybe, maybe not. As not long afterwards Laity started creating the likeness of his new wife and immortalising it in his recently favoured oil paint. Indeed, Laity chose to focus on the sensual female form, and it’s no great secret that his wife was the physical inspiration behind her artistic husband’s creativity, acting on occasion as his actual model, or on others, simply as his muse. As Laity underlines though, success inevitably stems from painting subject matter that you feel strongly or passionately about in the first place, and clearly Regina’s physical and emotional attributes were powerful and motivational reference points when admiring his unique, sensual, yet often humourous studies of the beguiling female form.

To Laity the most important factors, not just when circumnavigating or initially addressing art, but for approaching life in general are inspiration, perseverance, dedication and that all-important, aforementioned passion; naturally occurring elements that cannot be taught, but must arise from within the individual. Laity returns to the topic of sensuality, which is a recurrent, underpinned theme and feature of his retrospective work to date, and the visual documenting of which is paramount in his mind throughout the design process. In Laity’s own words he stresses; “I paint what I like. I like the sensuality and beauty of the feminine form. My works are a celebration of love and intimacy. I am trying to show that sexuality is something that can and should be held”. And there’s no arguing with that mission statement in our opinion.

In terms of exhibiting, Laity has welcomed the opportunity to showcase his work far and wide since turning professional back in the early 1990s, and remains hugely popular in his homeland, having enjoying the following (solo) commercial exposure from the outset of his career;