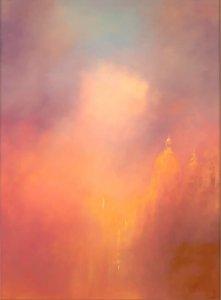 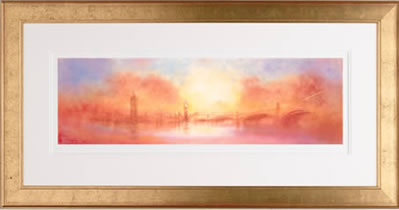 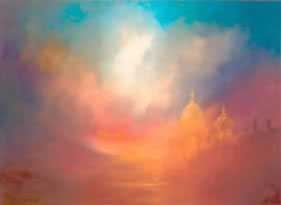 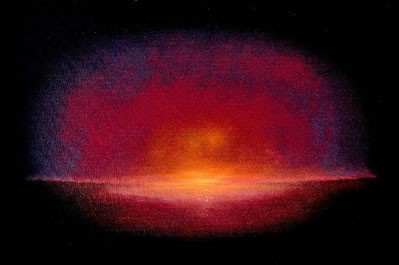 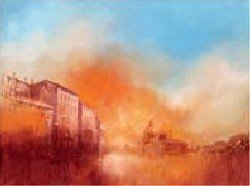 View All Art Works By Terry Donnelly
Bright, atmospheric, enigmatic, intoxicating, ethereal. Do you want us to go on? If so, we can run to many more superlatives which describe hugely popular contemporary landscape artist, Terry Donnelly’s work to a tee. Trust us with this. More often than not framed by the onset of swirling mists, whilst your eye’s first port of call is the decadent light source which attracts your gaze from the centrepoint of the illustration, outwards, a signature Donnelly visual number is nothing if not magnetically charged. Yet conversely being as mellow and reflective as a yoga class in full swing. So some observers might class his work as paradoxical, which would be a fair assumption, as there’s eclecticism about Donnelly’s typical style which can be traced back to his artistic beginnings.

Born in the Walker district of Newcastle upon Tyne, Donnelly fondly recalls his first memory of artistry, or rather, what he mistakenly believed was nature’s artistry, when in actual fact it had been accidently forged by the human hand with absolutely no creative intention whatsoever. Donnelly; “I was sitting on a bus (as a child), and in front of me on the glass window was a small but quite beautiful landscape, a sunset I believe”. He continued; “It was in fact a tomato which someone had thrown against the window and it had splattered to leave a lovely little image, an image available to everyone”. And so started this thought process and creative awakening in Donnelly that was ultimately set to map out his professional life. To this day the artist admits that pretty much anything and everything can trigger an artistic response from him, and although he counters that he hasn’t dedicated his life to the pursuit of squashed tomatoes, he does however maintain that images, and chance encounters with potential creative stimuli will find the artist in us all.

As a mere 15-year old, Donnelly was invited to sit the entrance exams at Jesmond College of Art and Industrial Design in his native Newcastle, which he passed with flying colours and attended thereafter, before obtaining post-education employment in an architect’s office elsewhere in the city. This was short-lived, as was the following stints in both a design studio in Blackburn in Lancashire and London for a brief spell in the sixties, as Donnelly returned to his home city to work freelance in a number of design studios. But this practice alone didn’t fulfil Donnelly’s very creative urge and dormant calling, and he longed to paint full-time for his own ends; which he finally did around this time. He was one of the fortunate ones, and due to natural talent and a go-getting attitude to his work, Donnelly quickly established himself in illustrative circles, acquiring a plethora of commissions for every genre from land and cityscapes to wildlife and portraiture, requested in a variety of mediums and materials.

For the next six years Donnelly worked out of his small gallery in the heart of Newcastle, specialising – and honing his style – in landscapes and cityscapes picturing his beloved Newcastle from all manner of compositional perspectives. Through development and evolution, Donnelly settled on watercolours and oils as being his favoured artistic material, and prospered in this contextual surround going forward. To date Donnelly’s back catalogue of work has been exported far and wide from its humble Geordie roots, with his pieces routinely finding new homes across the globe as his reputation has soared over the intervening years since he first bit the bullet and went for solo glory. Yet Donnelly remains grounded in Newcastle and its ever-changing vistas, panoramas and illustratively commemorative traditions, trials and tribulations, which he captures on his canvases with this raw and emotional energy, time after time.

When asked about his artistic heroes, Donnelly’s inspirations to reach for the brush in the first instance where much and many, and he doesn’t make a habit of listing a who’s who of famous artists to be honest. Aside from name-checking the old masters, Turner and Vermeer amongst his many varied influences, Donnelly instead cites movements – including that of abstract – most notably. With regard to Vermeer though, and Donnelly does insist that when he looks out on any of his hallmark paintings he sees what he refers to as ‘near perfection’, and goes on to wax lyrical about the simplistic beauty of his compositional work as well as the use and application of light and proportion. Having said that, and as we hinted at the top, Donnelly still maintains that it’s more often than not what he’s privy to on a daily basis which inspires him most, as opposed to being ever mindful of a painter or a particular brand of art per se.

There’s almost this sense of unswerving purpose in Donnelly’s approach to his art, which he truly sees as a calling rather than a game-plan or ambition from the off. In his own words he says; “It’s not only that I want to paint, but that I have to, because I wouldn't be able to stop even if I tried”. Donnelly recounts having always scribbled, sketched and painted from when he tells us about that whole ‘tomato on the bus window’ episode from yore, yet never once back then was it pre-planned, or in any way assumed that he’d become a painter and making a living from his own take on art. Donnelly readily speaks of being inspired from what he sees from the inside as well as images presented to him whilst he’s out and about, and suggests that he’s constantly trying to interpret and recreate the little worlds he’s party to in his mind’s eye; proving that art really is all around Donnelly, in no uncertain terms.