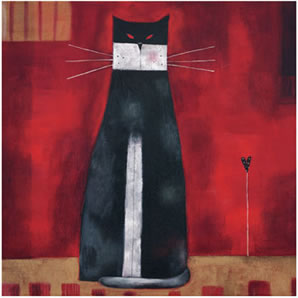 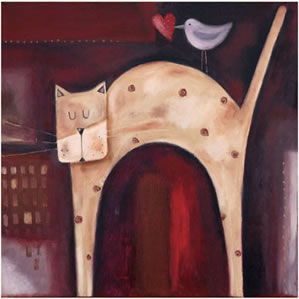 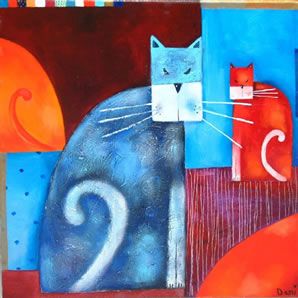 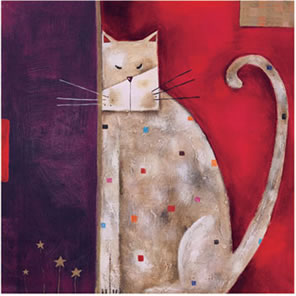 View All Art Works By Dani Bergson
There’s no denying that acclaimed contemporary fine artist, Dani Bergson’s got a thing for cats. If she hadn’t, then she wouldn’t dedicated so much of her time painting the likeness of her feline friends. Square-bodied cats, oblong-bodied cats, tall, rectangular cats and oval-shaped cats. Not that Bergson draws the line(s) at cats, as she’s also been known to capture the likeness of other animals too. Such as rhinos, dogs, lions and elephants, in her own inimitable fashion. Shortly before returning to painting cats. Bergson’s cats (and other animal friends) are normally bold, abstract, brightly coloured and intensely-portrayed cats which would grace many a greetings card. Which they have done/continue to do. So our advice to you (providing you like cats (and dogs, elephants, rhinos, etc) is to check out the immensely talented Bergson’s latest work HERE. But before you do, you might just like to continue reading this artist profile, so as to get a better understanding of just what/how/when/where Bergson does with cats. And other aspects of her life, both in the past, present and future tense.

Bergson was born and raised in Pinner in North London, and as a small person showed an avid interest and fledgling passion for the arts per se. in fact, she was so committed to the arts (in the all singing, all dancing form as well as canvas-bothering exploits), Bergson was pretty much convinced that she would eventually follow a career in either performing or painting when she grew up. This was fuelled by her childhood devotion to the drawing of animals, and in particular her fondness for illustratively engineering the (very) likeness of her family’s cats. An on-going project that would take up much of her time as a youngster as she sat in her parent’s back garden sketching away. As adolescent folly turned to teenage kicks, Bergson pursued her long-held dream and put things in motion by winning a place at Middlesex University in London where she began her formal training, before continuing in Birmingham at The University of Central England where Bergson studied for a degree in Printed Textiles. Graduating with honours in 1996, Bergson quickly landed her first professional role, becoming a Textile Designer for Monkwell Fabrics in Bournemouth.

With 2 years broad-ranging design experience under her belt, Bergson was offered the opportunity to progress her fabric-designing studio-based career at Osborne & Little in London, where Bergson was tasked with the origination of wallpapers and upholstery fabrics. Having gained a wealth of experience since departing higher education in her chosen roles, Bergson couldn’t help feel she had slowly become detached and having somewhat distanced herself from her first love, that of painting. With this feeling gnawing away, Bergson made a bold decision in 2000 to quit the hitherto day job and instead take the plunge and aspire to become a freelance artist and illustrator.

And boy, was this the best decision she could have ever made? Not so much a question, more of a statement, as it happened. Since arriving at this monumental decision and going solo, Bergson’s feet have barely touched the ground, as her bespoke compositions have won fans and been met with universal and critical acclaim far and wide. What’s more, from a commercial perspective Bergson’s unique illustrative work has been the subject of commissions for publications as everything from greetings cards and books to prints, posters and wrapping paper. The full merchandising gamut then. Additional exposure has been sought and delivered by the artist’s collaborations with one of the UK’s leading art publishers – Washington Green (which commenced in 2003) – that’s resulted in Bergson’s contemporary canvases appearing in galleries across the length and breadth of the country. In respect of her commercial involvement with Washington Green, Bergson has to date completed the design of three separate ranges of greetings cards for them, alongside of fulfilling design associated design briefs for posters, canvases and limited edition prints. Additionally Bergson has completed countless original works of art for individual clients.

As mentioned earlier, and in tandem with her default assorted cat-painting setting, of late Bergson’s also been responsible for producing highly decorative contemporary Indian inspired elephants, dogs and rhinos which are compact and affordable canvasses embellished with gold leaf and jewels and appear as semi-abstract pictorials. Which leads us to Bergson’s personal style and more pertinently just how the finished illustrative article is arrived at. So how does the design process take shape for Bergson? Good question, and one only the artist herself can truthfully answer, which is why her brains were picked on this very subject.

According to Bergson herself, there’s often no logical rhyme or reason as to how her ideas and concepts come about, admitting that many pop into her head at the most inappropriate of times. Irrespective of when and where they arrive, Bergson insists that she jots them down while these ideas are fresh and new, otherwise she’d lose a moment which potentially could harvest a lot further down the line. To ensure that no fleeting nucleus of an idea is missed, however transient they are, Bergson keeps her sketch pad close to hand, whilst this same sketch book is found equally within arm’s reach once she settles down to complete each individual composition, as crucial reference material. The next phase is where Bergson opts for her colour palette, which may be a purely spontaneous turn of events or be a more premeditated and visually prompted one by the creation and manipulation of a mood board; itself comprising of a collection of objects which Bergson cuts out from magazines and other research materials.

Preferring to work on stretched canvas or board with an application of acrylics or oil bars, Bergson champions acrylics specifically on account of their immediacy, combined with the raft of textures which the material can affect, courtesy of scratching and marking compositions at various stages of creation. Once the form of the painting has been sketched and the colour palette has been established, then Bergson suggest that she approaches the actual manifesting of the illustration as an abstract piece of work, so as to balance colours and textures. Texture is key to Bergson, adding that this part of the process is the most pleasurable, whilst simultaneously the most pivotal to the overall composition. drawing on her background in the textiles industry, Bergson cites the introduction of a variety of (sometimes unconventional) tools and methodology to achieve the array of differing finishes which she strives for, hinting at printing with scraps of material as well as a host of implements to scrape scratch and indelibly mark.