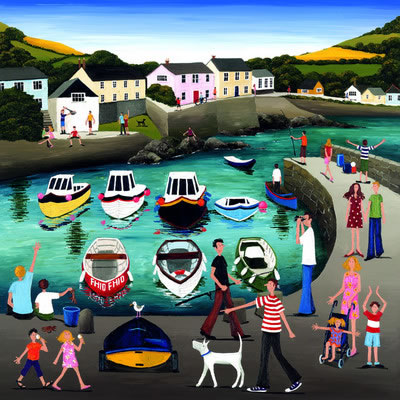 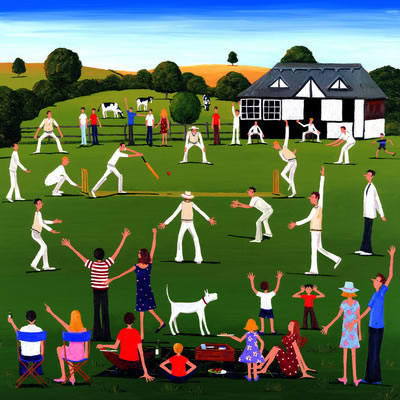 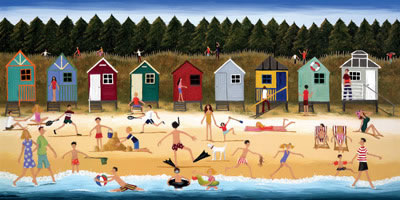 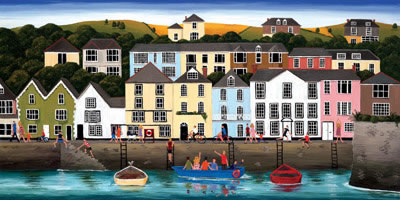 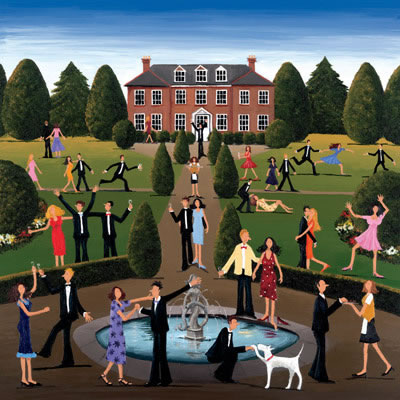 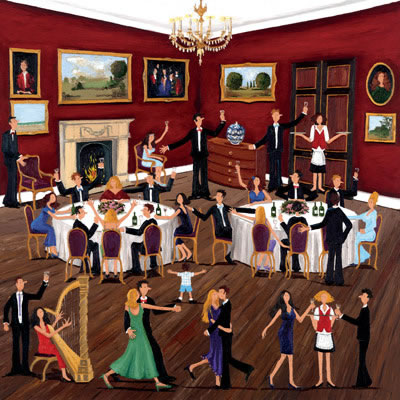 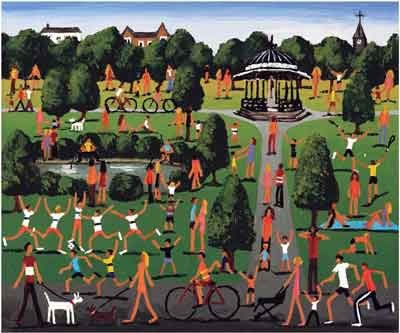 View All Art Works By Louise Braithwaite
A word of warning from the off. If you’re not comfortable in company (and by company we mean in excess of 40 people up close and personal) we suggest that you look away now. That’s simply because exciting (and clearly people-person savvy) contemporary people, sorry, landscape and figurate artist, Louise Braithwaite has a thoroughly pleasing and eye-catching penchant for flooding her canvases with masses of people. Happy, clappy, usually very busy people going about their business. The business of dancing, shopping, playing, talking, cycling, swimming, drinking, walking, jogging, sunbathing, rowing, eating, watching, celebrating. Anything that ends in ‘ing’ and requires a great deal of physical activity and/or exertion according to the most visual parts of Braithwaites hallmark artistic pieces.

Typically played out on the grass/beach/city/park/ski-slopes/playing field/pub, Braithwaite’s compositions are positively brimming with frenetic activity and human commotion. Of the sunny variety that is, as there’ not a single bad word/look being exchanged by the pictorial players depicted in Braithwaite’s action-packed illustrative scenes. Layer upon layer, dimension after dimension, house after house and yes, person after person after person, piece by piece, Braithwaite constructs a breathless piece of contemporary art which is abuzz. Alive. Hectic, yet measured and totally charming to the naked eye. To anyone of a certain vintage, think children’s book illustrator from the 1970s, Richard Scarry and his busy, busy worlds, which again embraced every imaginable vista, crammed with every denomination of Joe Public as governed by the parameters of a page/frame. And then some.

Referred to as a ‘naïve artist’, Braithwaite’s constant hive of activity-based paintings have been compared favourably to L.S Lowry’s, and indeed have been dubbed, ‘happy Lowrys’, with the implication that the Salford-born artist’s industrial grey surrounds were a lot more intense and, arguably more gloomy and pessimistic in their design language. Braithwaite first noticed she had a knack for art and design during her school years, and in particular whilst learning about screen printing. Buoyed by the endless possibilities of art and printing and such artistic like, Braithwaite embarked on an Art Foundation course at Portsmouth College of Art, after completion of which she won a place on a degree course in Media and Production Design at the London College of Printing. Graduating from there in 1991, Braithwaite followed the traditional (and now familiar route) into the world of contemporary art, which if course meant traipsing around the world (in her case, Central America) for several months to discover things/herself/direction/etc.

What this globe-trotting experience did achieve in terms of her future profession was equip Braithwaite with an understanding and appreciation of both colour and shape, and the critical roles which they both play in art of any branding. This skill set was soon put into practical practice on her return to UK shores, in her role as a graphic designer in London. Despite her creative talents being recognised and amply rewarded in the commercial world, Braithwaite couldn’t help but feel slightly restrained in her art. And longed after a time when she could strike out as a solo designer, under her own steam, creating what she so pleased. Or at least, what individual commissioning clients politely requested her do. During her free time Braithwaite would whet her appetite for outright, no-holds barred creativity by designing and selling handmade greetings cards and illustrations which she successfully retailed through a collection of high street outlets, including (drum roll please….) Harvey Nicks. During this same period Braithwaite also undertook a number of commissions for corporate Christmas cards.

In May 1997, Braithwaite took the plunge and moved to Hampshire. This wasn’t the plunge, which of course was going it alone as a full-time professional artist (gulp). From that point onwards Braithwaite developed and evolved a style of painting which, although expressive and overtly quirky is nevertheless firmly grounded in her corporate design past. Braithwaite’s trademark high impact oils are predominantly figurative is aspect and are integral to the dynamics and energy of the crowded scenes that characterise her back catalogue, visually executed in a unique fashion which is stylised yet beautifully and considerately observed at the same time. The overwhelming love of the sea which drew Braithwaite back to the South Coast is reflected throughout her work, but we can also see a great affection for human interaction in a variety of social and public situations.

Since turning professional Louise had not looked back, as her bespoke artwork is currently showing in prestigious galleries all over the country (including the Harrods Picture gallery) whilst counting a number of celebrity admirers amongst her collectors, including TV’s, Martin Clunes. Whilst many of Louise’s pictures are of London parks or river scenes, in light of moving back to Hampshire Braithwaite has developed a love of the sea which is reflected in her paintings which is noted in her more recent pieces.