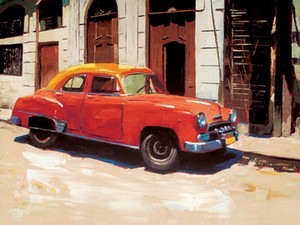 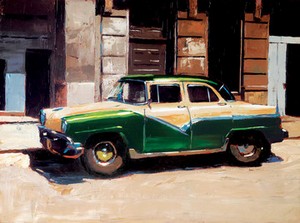 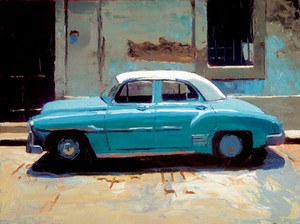 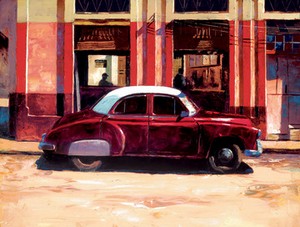 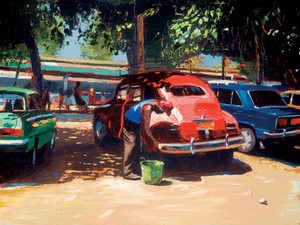 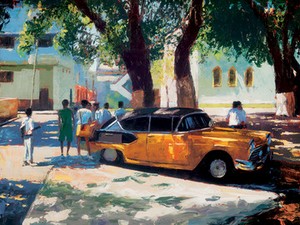 View All Art Works By Jeremy Sanders
Contemporary Fine Artist, Jeremy Sanders; “My paintings reflect a positive view of life, I hope that like a good book, they have a narrative that to some degree you can get lost in.”

We’ve all seen them. In American movies. On the pages of holiday brochures. They’re as instantly identifiable with the country (and as hinted, popular holiday destination) as vivid colours, massive cigars, colonial architecture, men’s tall heeled shoes, rum, dancing and Fidel Castro. Yes, of course, we’re referring to the island of Cuba. But more pertinently, 1950s American cars. Big, glamorous, angular, winged, chromed and timeless sedans which – thanks to a favourable climate – have not only survived, yet prospered rust-free for over half a century now. Well, acclaimed contemporary figurative, landscape and still life fine artist, Jeremy Sanders makes it his illustrative business to visually document these bad boy automobiles, steeped in history, on a range of canvases, in his own quirky, Impressionistic styley. Not that Sanders’ artistic talent stops there, as he’s also been known (i.e, is also extremely good/prolific at) to capture the likeness of Brighton and Weston-Super-Mare beaches/piers/bathers/etc and various other quintessentially English pictorial aspects in his ‘Best of British’ collection. And then there’s his creative sojourns to glamorous locations where any self-respecting painter journeys to if they’re planning on making it big time. Such as Venice, Paris, Provence, Rome and Majorca?! Why Sanders’ also flitted across the Atlantic and pitched up in New York City according to his website.

So what do we know about Mr Sanders? We know for a fact that he was born in 1969 in South Wales for starters, whilst we’re also secure in the knowledge that he studied art at Central St Martins School of Art where so many famous and best-selling contemporary artists cut their creative teeth. The one in London that is, in case there’s another, lesser one you might have heard of. Not content with merely familiarising himself with these corridors of artistic power, Sanders went on to attend the University of the West Country too, where he graduated with flying colours (and a first class Honours Degree) and also collected a gold medal from the Prince’s Youth Business Trust for his mentoring during this period too. Our sources also inform us that Sanders’ work has appeared extensively on the gogglebox in the corner of your room, including featuring in Kay Mellor’s “Between the Sheets” and Julie Burchill’s drama “Sugar Rush”. What’s more, the fashion brand that comes by appointment to all the hipsters, Fat Face, have used Sanders’ compositions for a world-wide advertising/promotional campaign, while he’s also been previously commissioned to artistically collaborate with the likes of NatWest Insurance, Saga Ruby, Tui Celebration and Cunard Queen Victoria cruise liners to date.

Sanders never waivers from his preferred choice of material applicator, oil paint, as they afford him a broad, sweeping, intense feel and ambience to his hallmark compositions, and allow him to present colour and light with a delicate yet determined definition. Which we know for a fact is a belief shared with many of his contemporaries. Yet where Sanders does differ from his fine art peers, is in his method of administration of medium, in terms of its introduction to the surface area. Or canvas, in old money. Sanders applies the oils directly from the tube with dissected credit cards or phone cards. Which is novel. Although he fervently believes that this unorthodox tool possesses similar qualities to that of the more conventional, palette knife. Yet insists that sharp corners and broad edges lend themselves better and tend to be more versatile when laying down his paints.

Sanders isn’t inspired by any one particular artist either old or new, although does cite the American Realist painter, Edward Hopper’s atmospheric urban landscapes of the 1940s as probable, subconscious influence, specifically his use of space and the figures within it. Moreover Sanders is fascinated by the natural colour and light of the Mediterranean, and the manner in which the light passes through a typical sun-kissed day amid this descriptive landscape. Sanders maintains that his overriding concern is; “Not with the specifics of an illustration, or trying to appeal to people’s intellect; but with working on their emotions and memories”. When Sanders adopts his range of cultural reference points – for example his vintage cars in Cuba – he immediately transports us to the scene itself, and a time and a place, which can only be applauded and admired. Working from a memory enriched by extensive travels and travails, taking in the delights of North Africa, Cuba, India, America and Europe, Sanders visually relays each and every nuance and pictorial admission back to the viewer courtesy of his seismic portrayals.

Sanders has seen his individual works and collections showcased far and wide, including most recent at the Reading Contemporary Arts Fair, here in the UK in April 2013, whilst prior to this he’s exhibited at the following gallery locations; Clarendon Galleries (Mayfair and Cunard Cruise ships), Whitehall Galleries (nationwide), Lemongrove, Blue Dot, Medici and Artique galleries in London, Brighton’s Vivid Palette, Open Houses, Naked Eye and Brighton Rocks, ArtCo at Leeds, the Blue Moon Gallery in Henley, the Spring and Autumn Fairs at Birmingham’s NEC and Bristol’s 3D Gallery.