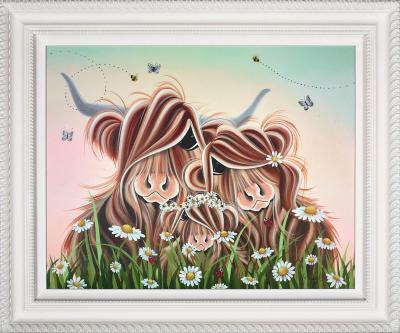 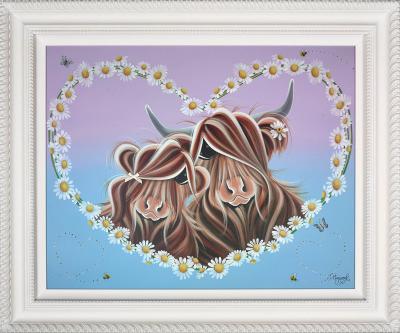 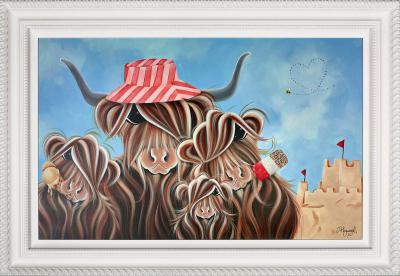 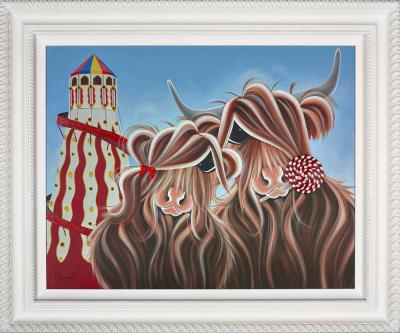 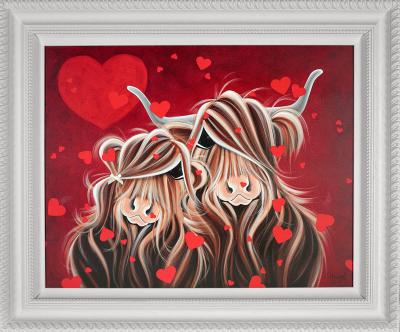 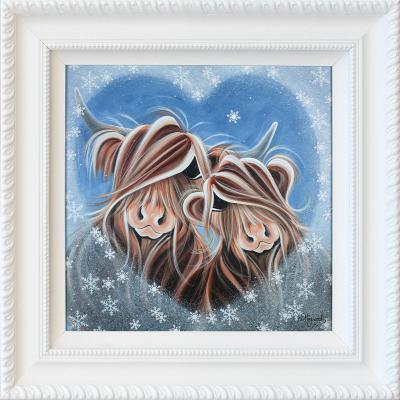 View All Art Works By Jennifer Hogwood
There’s brown, and then there’s BROWN. As we are already well aware mud is brown, as are camels (only a paler brown), whilst pale ale is notoriously brown, as are nuts and assorted pine cones. And Monks habits. But there’s never been a brown as intentionally brown as Hogwood Brown. Which according to our sources isn’t on any Dulux colour charts that we’ve ever seen. We’re not entirely sure if it’s been classified and therefore registered as Hogwood Brown, but we can confirm that it’s definitely a new variation on a brown theme.

So who’s Hogwood, we hear you exclaim? Well, Jennifer Hogwood is one of the new breed of contemporary animal humourist artists we often bang on about (think in the Caroline Shotton mould) and is causing something of a stir within the genre, and has been for a while now, as she continues to stake her claim for justifiable attention (and subsequent praise) for her sublimely infectious bovine caricatures; affectionately known as ‘McMoos’. With a new, hotly anticipated mini-series released in the autumn of 2013, Hogwood’s steeply rising star is definitely in the ascendancy as we go to press (in the autumn of 2013, just for indexing/timeline purposes should you be reading this in, say, 2020).

Hogwood’s now prime-time ‘Hogwood Herds’ are already making the right illustrative noises (no, not mooos and such lame bovine stereotypes) amongst art collectors, thanks in no small part to the artist’s often humourous, always heartfelt and personable portraits of the ever-diverse family McMoo. Born and raised in rural Bedfordshire in 1980, Hogwood now calls home the equally wild and wonderful Wiltshire/Dorset border, situated in the South West of England, where she resides with her husband, two young children and brace of Springer Spaniels. You see an animal-loving pattern forming here?

Providing they’ve got four legs (typically one in each corner – although chickens have been known to pique her interest), then Hogwood’s very much ‘in’. Dogs, horses and obviously, cows. And has been pretty much from day one, as animals and the great outdoors played a massive role/influence during her formative years growing up in the countryside and surrounded by all things animaltastic. Yet, as we may have already hinted at, it’s highland cows which really creatively motivates a very talented Hogwood. She is truly inspired by the very presence of highland cows, and loves everything about them, from their messy hair/fringes to the fact that their offspring’s look like cuddly bears. Her words, not ours. In terms of outside influences, or rather who she can relate to most, Fiona Rae is the name which crops up on a regular basis, purely for her fortitude and determination to get her particular brand of art, right.

Moooo-tivation-wise, it’s of course her love for her McMoos which comes first, second and third in that specific list, yet Hogwood makes much of her ability to make people smile through her artwork, and conceded that in her estimation it remains the best feeling in the world knowing that someone’s face has lit up when confronted by one of her notoriously witty pieces. In addition to this a huge amount of satisfaction and personal pride stems from the fact that art which she has created hangs from people’s walls. Hogwood clearly love the artist’s life, readily admitting that one of the USPs of it as a career was being able to dress lazily and have her mad behaviour excused. In a recent interview she was quoted as saying; “People just accept these things when you are an Artist!”

Hogwood didn’t go down the art college route as so many before her did, and instead has taught herself everything she knows about art in general and her contemporary discipline in particular; which clearly hasn’t held her back in her subsequent professional painting career. Speaking of her paints, and Hogwood champions the cause of acrylics, which she cites as being incredibly versatile (watered down to apply like watercolours or applied with a density to recreate an oil administration, dependant on subject matter and surface medium used). When she’s not welded behind her trusty easel, Hogwood enjoys gardening, and considers herself somewhat green-fingered, whilst Hogwood is a committed fan of rap artistes. Yes, rap. As in Kanye West and 50 Cent, although does temper this with an enduring penchant for the works of Bob Dylan. He who himself has turned to contemporary art of late, although a million miles away from what Hogwood is making a name for herself with.