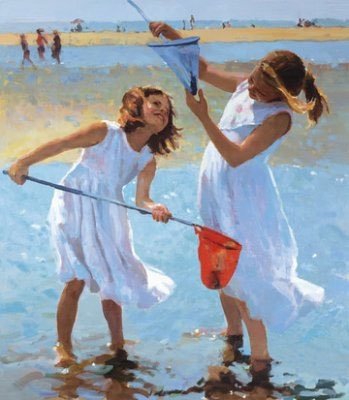 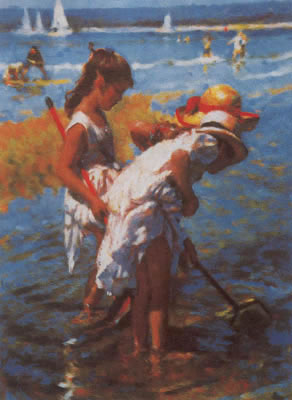 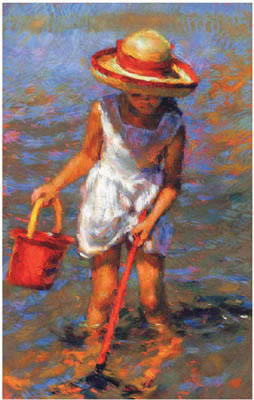 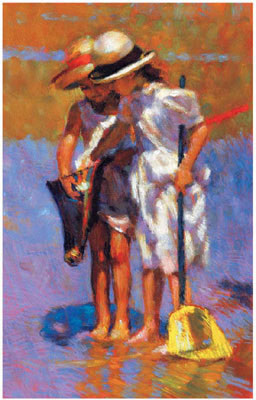 View All Art Works By Mark Rowbotham
Husband of universally celebrated fine artist, Sherree Valentine-Daines, Mark Rowbotham completes the other 50% of one of the UK’s leading contemporary figurative artist teams. This husband and wife partnership have been responsible for the production of a glut of stunning and best-selling illustrative work between them down the years and pride themselves on their enticing blend of pastel, oils and watercoloured compositions. However it’s Rowbotham we’re interested in most on this content-creating occasion, as we afford you a little more background on the hugely popular exponent of the figurative and landscape genre.
Born in Sarawak in Borneo in 1959, Rowbotham’s parental unit were of Yorkshire breeding themselves, and as soon as their son showed signs of an artistic streak, actively encouraged and supported him as his fledgling talent blossomed during his formative years. Expressing himself through his grasp of art as a child, Rowbotham’s gift didn’t go unnoticed outside of the family environment either, as he was awarded first prize in the National Children’s Painting Competition at the precocious age of just 8 years. It comes as little surprise then to learn that Rowbotham went on to study Fine Art at Degree level once he’d completed his rudimentary secondary education, choosing to take the course at Epsom Art College when the time came.
Yet once he graduated Rowbotham stopped his potential professional painting career in its tracks, by instead opting to go into his family’s business; albeit a not altogether uncreative line in itself. But not one to do things by halves it would appear, Rowbotham decided that to compliment pursuing a career in the landscape gardening industry he must familiarise himself with all aspects of the business; and therefore enrolled himself on yet another course of higher education in order to realise this. With this in mind, Rowbotham’s next step was to sign up for agricultural college, where he spent an additional 2 years studying Landscape Design.
The story clearly doesn’t end there though, as all the while that Rowbotham was immersing himself in his family’s business, he was further brushing up on his art and keep his painted hand in so to speak, if only as a labour of love at that juncture. Striking a work/life balance which he was happy with and served his needs well at the time, Rowbotham was eventually swayed back towards his first creative love, and turned to painting his satisfy his every professional and personal need in the end. So much so that in recent years Rowbotham has dedicated his time to his compositions, which has subsequently left precious little time for the landscape design/gardening commitments; and he’s all the more contented for this.
Rowbotham has long been inspired by the works of Degas as well as the Impressionist movement, which tells heavily in his own brand of illustrative art. Choosing to frequent a cross section of media and sizes, Rowbotham more often than not opted for the pastel approach to his predominantly figurative art when starting out and striving to make a name for himself. Having said that, in recent history Rowbotham has gravitated more towards a seemingly exclusive use of oils which has been equally well received by his loyal followers and art critics alike. Indeed, Rowbotham’s now signature graphic releases have become much sought after pieces, due in no small part to what many acknowledge to be the very carefully executed nature of his work. Rowbotham’s been known to take many days, even weeks, manifesting each piece. Although noted for his draughtsmanship, Rowbotham has also invited high praise for his sensitive and considered administering of tone and colour.
Rowbotham’s work consequently appears in numerous private collections globally, while closer to home, examples of his work take pride of place in such prestigious establishments as the Wimbledon Lawn Tennis Museum. The awards didn’t begin and end with his first, and back as a prodigiously talented 8-year old as mentioned above, as Rowbotham has since gone on to enjoy various accolades in his capacity as a professional artist. These include the coveted Patterson Award, as presented by the Royal Pastel Society in 1993, whilst he’s also been approached with a view to joining the respected Royal Water-Colour Society and the Royal Oil Institute.
Elsewhere and Rowbotham has had countless illustrative pieces accepted and furthermore, prominently displayed in a gamut of high profile places, which include the New English Art Club, the Royal Watercolour Society and Royal Society For Painters In Watercolour, the Royal Society Of British Artists and the Royal Institute Of Oil Painters amongst others. Today Rowbotham is exploring new creative areas in terms of subject matter, which, courtesy of his technical mastery ensures that he routinely originates pictorials which, irrespective of visual intent and purpose, exude atmosphere thanks to his use of texture and deep, opulent hues and saturations of old. A regular exhibitor at London’s in demand, Mall Galleries, Rowbotham also enjoys phenomenal international success and cites Jeffrey Archer and Bamber Gascgoine amongst his celebrity collectors.