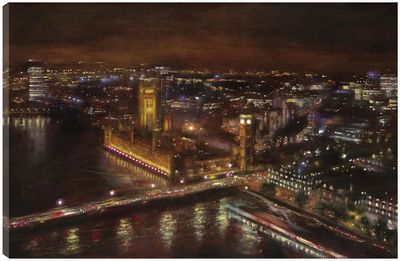 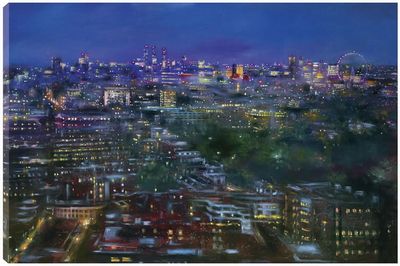 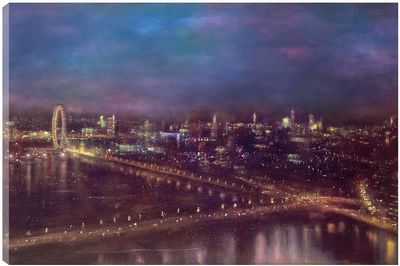 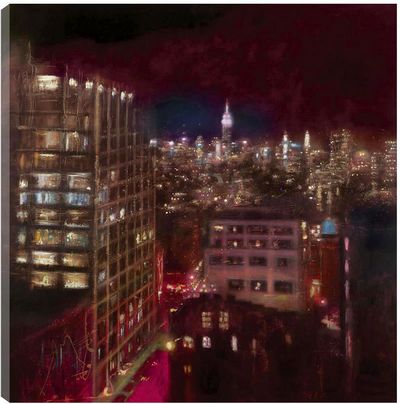 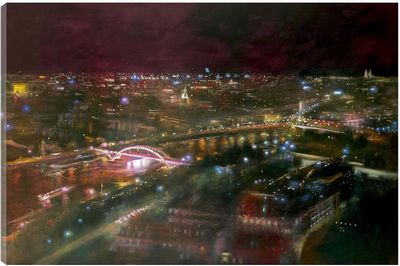 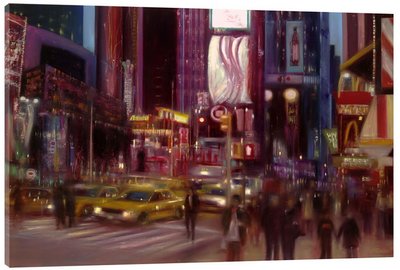 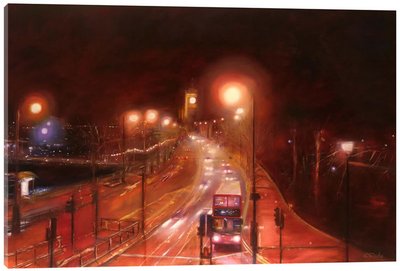 View All Art Works By Lesley-Anne Derks
If we were to pen a one sentence bio for exciting contemporary urban landscape artist, Lesley-Ann Derks, then it would read a lot like this; ‘Street scenes. Mostly under the cover of darkness. Often wet. Awesome’. And that would be hitting the nail on the head to coin a popular phrase. Thankfully there’s an awful lot more to Derks and her back catalogue of art to occupy out mind (and fulfil this page’s artist profile requirements), so we best get cracking and afford you the proper lowdown on someone with an enlightening portfolio and fascinating story to tell.

Derks readily admits to having been inspired by the petro-chemical industry which was discovered on her doorstep, having grown up deep in petro-chemical manufacturing country in Grangemouth; found on Scotland’s North East coastal fringes and merely a stone’s throw from Falkirk. Which, incidentally, was where Derks was born back in 1977. The petro-chemical bit which Derks drew so much inspiration from during her formative years was the scenes the huge oil refining plants (and their multi-structured platforms, pipeworks, towers and stack chimneys) depicted at night, which served to illuminate the entire sky, emitting a strange orange glow. Indeed, these petro-chemical processing mini cities are bedecked with millions of seeming fairly lights once darkness falls, and the superficial lights and reflections on a phalanx of shiny surfaces does, oddly, appear magical from many perspectives. If you ever get the chance, take a look for yourselves. Anyway, art and that.

With the help of this weird influencing, Derks immersed herself in art during her adolescence and was said to have excelled at the discipline throughout her school years, which she left behind her in 1994, before embarking on an Art and Craft course at the Falkirk College of Technology. A year on, and in 1995 Derks won a place on the BA (Hons) Fine Art and Drawing degree course at Glasgow’s prestigious School of Art, where she studied up until 1999, during the final year of which she attended the Facultadt de Belles Artes, University of Barcelona, spending three months there as an exchange student. Again whilst in Barca, Derks was exposed to and bewitched by the majestic night skies which hung over the stunning cityscapes beneath, adding another dimension to her illustratively-empowering love affair with twilight, urban vistas.

After graduating with her degree and bagging the obligatory framed cap and gown photo for the mantelpiece, Derks set to work on manifesting dramatic night-time street scenes on returning to her native Grangemouth, firstly turning to her local landmarks to cut her teeth in the subject matter. Suffice to say those original settings (with huge respect) were replaced over a period of time by slightly more, well, romantic backdrops, and famous, instantly recognizable ones at that. Like Glasgow, Edinburgh, London, Paris, Hong Kong and New York. In fact, just about anywhere Derks has made it her business/pleasure to travel to in recent times, she has captured the (resolutely night fallen) likeness of. At the very core of each piece, as far as Derks’ aim is concerned, is the necessity for each composition to allow viewers to arrive at their own, varied conclusions regarding the subtleties and visual nuances centringon the movement, light and sound which the artist herself experiences when creating the work from the outset.

Lights, superficial ones affording us alternative elements and perspectives during the small hours have always captivated Derks from an early age, whilst the introduction and subsequent interaction of natural elements such as rain, sleet, snow and mist injected an already descriptively layered scene with even more brevity and meaning. And at this juncture Derks cannot help but recall how growing up in an industrial town heightens and reinforces this almost inherent fascination with such man-made sceneology, and the way in which it ultimately played with her childhood imagination. Derks instinctively remembers large shafts and halos of colour and twinkling lights, mesmerising and to a child’s mind, mystical, other worldly even, irrespective of the utilitarian process going on beneath the gregarious scenes. Derks was – and remains to this day (as she still resides in her home town) – amazed that a skylines that appears so grey and somewhat ugly during the day could become so beautiful at night, an appeal that never ceased to pique her interest during her schooldays when she would get her father to drive around the perimeters of these oil plants in the evenings, so her and her friends could experience this ‘Bladerunner-like’ city scene over and over again.

Derks’ predominantly oils and mixed media works have since proved highly popular and have been widely distributed across the nation, especially after fostering a working relationship and instigating a collaborative union with Washington Green, who are one of the UK’s leading art publishers, who through their network of country-wide art gallery partners have ensured that Derks’ work has been made far more accessible to the general public than it would have been previously.