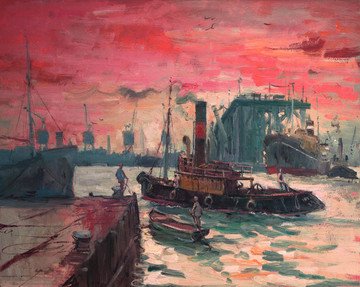 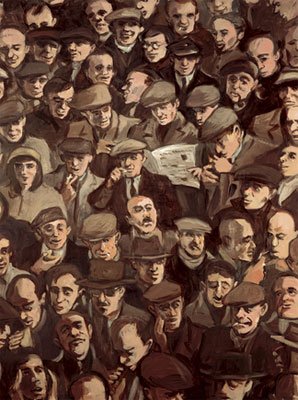 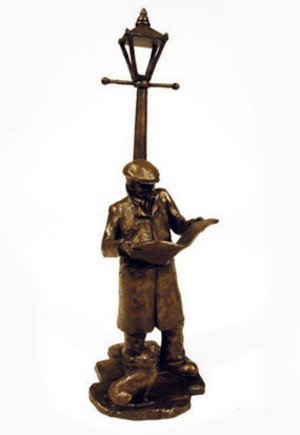 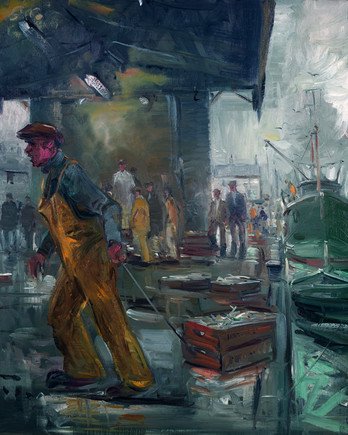 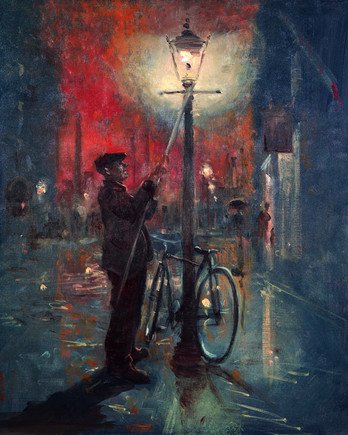 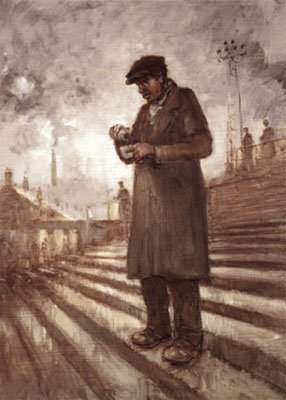 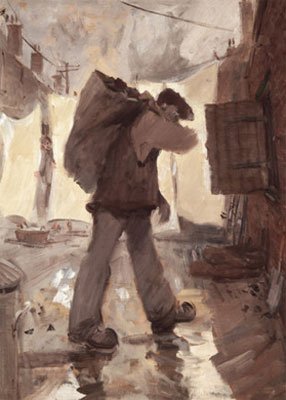 View All Art Works By Peter Knox
Heavy industrial images tend to be the (more than welcome) norm for many an artist who has grown up in and around the North East of England, a proud and resolute region and people who’s previous generations were collectively responsible for the accumulative successes of mining, shipbuilding, railway construction and steelworking to name but four industries on which the North East’s reputation was built and in which its economy prospered, until fairly recent times. One such son of this area was acclaimed contemporary fine artist, Peter Knox, whose signature works of art provide a very visual dialogue and readily seal a pictorial documentation of the lives and industrious times of the landscape which it’s fair to say shaped Knox’s childhood.

Knox’s visual diary presents enigmatic and evocative industrial images, which whilst portray typical vistas in a unswervingly unrealistic illustrative gaze, never lose sight of an entrenched affection and underlying sensitivity for what the artist describes himself as a vanishing world. If there’s one common thread running through Knox’s work it’s that inextricable link between the awareness, connection and concept of family, friends and childhood all being woven into his canvases. With nearly every family in the North East at one time seeing many of its members employed in the shipyards that dotted the banks of the River Tyne, the engineering works which worked in tandem with the dockyards, the mines or the steelworks, the sense of community and a common purpose was immense, and is a socio-economic essence which Knox captures with style, grace and aplomb in his individual and collective pieces.

Typical scenes of the North East’ said industrial heritage were more often than not witnessed from the crossbar of Knox’s father’s bicycle, as father and son took in the sights, sounds and smells of their hometown during Knox junior’s formative years, and it was undoubtedly this powerful scenery which inspired the (as yet) unexplored artist in Knox retrospectively. Knox was born in Hartlepool back in 1942 and has plied his trade as a professional fine artist for in excess of 35 years now, having initially trained in creative disciplines both locally, at Hartlepool and then latterly, in Leicester.

In 1968 onwards, Knox became a tutor for the College of the Sea (now known as the Marine Society) and courtesy of this role was fortunate enough to travel around the globe in the guise of art instructor, passing on his knowledge and skillset in drawing and painting to others, primarily those aboard merchant ships. You see, Knox had always possessed an affinity with the sea, born and bred on the coast himself, and as a child dreamed of adventures on the high seas and circumnavigating the ocean waves further a field, habitually losing himself in wondrous fictional worlds filled with late night naval tales and fishing yarns passed down through successive generations of coastal-dwelling folk. After following his heart and experiencing a life at sea, Knox returned to land and enjoyed a three year stint as an art lecturer in Norwich, before eventually opting to take up painting on a full-time basis and seeking to dedicate himself to his personal calling permanently.

Now living and working in the Scottish Borders, Knox’s art has found favour with fans and collectors alike, around the world, with a continual host of galleries exhibiting his work, whilst a number of his pieces are found in the collection of The National Maritime Museum as well as the Marine Society. Despite committing much of his time to originating new pieces, Knox still affords himself time to share his artistic passion and fervour with others in the capacity of Art Lecturer at Norwich University.