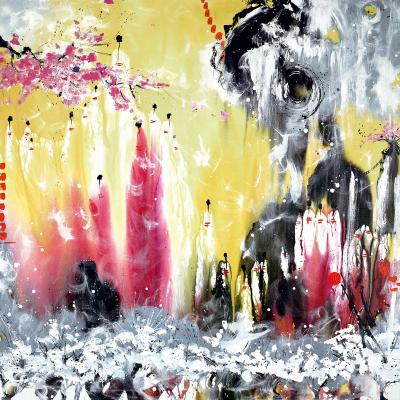 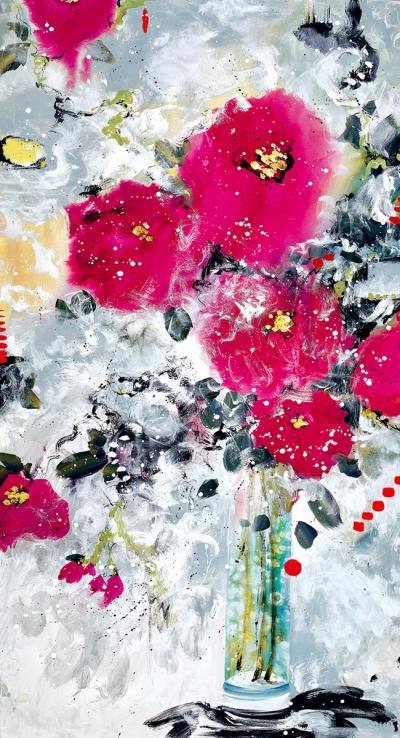 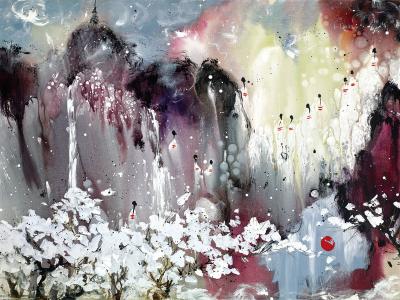 View All Art Works By Danielle O'Connor Akiyama
Danielle O’Connor Akiyama believes that her background in art therapy stood her in good stead for the transition to becoming a fully fledged professional artist. Whilst an art therapist she regularly educated and encouraged people of all ages with all manner of psychological issues and/or health implications to look to art as a way in which to both escape their immediate problems and moreover to express their innermost in ways they might not have previously thought possible. This grounding in fostering personal change in people and harnessing an alternative creative outlet afforded her a greater awareness and understanding of how art can make you see the world differently. But it wasn’t until such time as she turned her back on this and looked to embrace her love for the subject matter that she realised first hand how her comprehension of psychology would engender such a profound influence on her own inspirational images.

Canadian-born Akiyama has painted in a variety of media, and was schooled in watercolours at an early juncture in her career. However the Toronto-based impressionist artist has endeavoured to establish herself in the contemporary art world over the past three decades through her application of fluid acrylics on canvas, and has built up an enviable reputation across the world based on the novel way that she captures the art of the flower. Be it group images awash with ebullient colours or singular blossom, Akiyama is a dab hand at creating luminous floral compositions that resonate with a sense of high energy and vivacious life. Light, shadows and projections of both interestingly pale and intensely dark backgrounds form the backbone of each piece, whilst the injection of vibrant colouration exemplarifies the finished article from all perspectives.

Akiyama has acquired a host of commendations in recognition of her painting over the past 30 years, paintings which the artist herself describes in her own words as being, ‘sanctuaries for the soul’. Akiyama was recently named as the President's 1st Choice at the Florence Biennale; while in 2011 she was named as the UK’s New Artist of the Year at the Fine Art Trade Guild Awards event. Attention is very much in the detailing of Akiyama’s often elaborate works of art, although it’s not always identified on casual observation. Read between the bold, exuberant brushstrokes however, and the full story is told. Very elaborate, intricate facets are sometime, transiently engulfed by the bigger picture that’s panned out around them. On the surface there is a myriad of texture – paint, plaster, resin, encaustic wax, etched words, but there are stories buried beneath this - silent palimpsests of portent and mystery which are like hidden treasure within the image.

So important was it to Akiyama to let the whole degree of floral truth out through her fastidious (masked) artwork, which the modern day impressionist took it upon herself to engage in the study of sumi-e. To those unfamiliar with the movement, sumi-e is a 2000-year old traditional Japanese art that has its roots firmly potted in Zen Buddhism. A brush and ink style of ornate, precise painting that existentially captures the soul and lifeblood of the subject matter, sumi-e is a (black ink only) wash painting technique developed in China during the Tang Dynasty. So adaptable to and respectful of sumi-e during her tutelage, Akiyama’s head sensei of Nanga Sumi-e bestowed upon her the title, ‘Chi-Sho’; equating to ‘a source of joy’, and which effectively allowed Akiyama to frequent the distinguished red chop mark on each of her original works of art.

Akiyama’s distinctive fusion of eastern and western artistry has led to her works being highly prized by art collectors from both sides of the Pacific, and Akiyama’s prized floral compositions have been showcased worldwide, with particular audiences across North America and in various parts of Europe. The artist sees her work as being manifestations of magic, tales of love and abstractions of the heart. Many pieces are emblematic of her extensive travels around India, Tibet, Nepal and her beloved High Canadian Arctic.

Akiyama concurs that the flowers that she now paints are no longer deemed botanically accurate portrayals, and would never be held up to the light to be judged as such. She prefers to refer to them as an abstract, one which is sculpted to reveal a raw, unbridled new emotion. In the artist’s own words, “They are a lyrical dreamscape, the channel to my interior world.” Akiyama’s mother once imparted advice which the artist has taken to her heart and abided by pretty much ever since. That being that an artist’s work should always hold back something. Hence you witnessing enigmatic spaces on a canvas, intentionally for a viewer’s eye top be directed to it. This is conducive to the viewer coming to their own conclusions of the what, why, when and how in relation to that little absence of content. Akiyama suggests that "sometimes a dreamer needs a grounding force so they can travel upwards endlessly." For this reason, her paintings often have a rooted sense, either through the inclusion of bamboo or a vase.