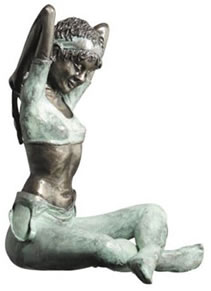 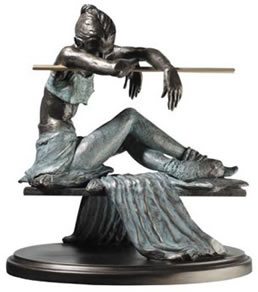 View All Art Works By Benson Landes
The female form is indeed a joy to behold when executed with an awareness and sense of perfection as to what makes it what it is, and moreover, how design language is imperative to projecting the right visual message, irrespective of what medium it’s conveyed through. Having said that there’s always another element, and further layers to be enjoyed when it’s cast in three dimensional form, and removed from a more conservative canvas surround. There’s an inherent sense of purpose and fluidity of movement when the female form is structured with a greater emphasis on 360 degree perspective in our estimation. A feeling clearly shared and emphasised by – and through the critically received work of – celebrated contemporary sculpture artist, Benson Landes. And the subject of today’s modern art sermon, albeit without a quasi-religious angle you’ll be pleased to read.

Sculpture is without regret a passion for Landes, as evident through the phalanx of his acclaimed work to date, and there’s few more passionate portrayals of the female form than those re-enacted through the medium of dance and performance art, such as ballet and flamenco dancing. That said, not all of Landes’ sculptures capture the essence of woman in full battle cry (or rather, dance-based performance), as a large percentage are cast in wistful, reflective poses, typically caught in transient moments of solitary repose. So just how does Landes manage to visually and materialistically concoct such searingly exacting glimpses of such women in such poses with such aplomb. The answer is having spent quarter of a century in the close company of the (perceived) perfect female form – all grace and elegance - working in the couture business, the industry which he entered on his father’s implicit instructions at a mere 14-years of age.

Ironically, Landes has admitted in recent times that he had somewhat reluctantly agreed to his father pressuring him to enter his clothing workroom as a young teenager to undertake his apprenticeship, on account of him having previously harbouring desires of becoming an artist; borne out of playing with Plasticine and drawing as a child.Yet Landes wasn’t one to shy away from hard work and application, even as an adolescent and kept his head down long enough to learn the family trade as per his father’s wishes. His father apparently drilled it into Landes that he should learn a trade as he put it, and since the family business was clothing manufacturing he had to learn the rudiments of pattern cutting and machining, so as to gain a comprehensive understanding of the world of fashion design.

However, a two year stint of National Service, which he was drafted in for as an 18 year old, proved a turning point for a young and impressionable Landes, who, surprisingly, found this opportunity a golden one to further his still dormant artistic cravings. Hitherto unobtainable materials such as pastels, paper, Perspex and plaster of Paris (and possibly other mediums of creative expression which didn’t necessarily begin with the letter ‘P’) were instantly available in the workshops of the air bases Landes was attached to at the time, which served to fuel his imagination.

After completing his National Service with the RAF, Landes made a brief return to the family business, and married his wife at the age of 21. So as to provide for his new wife, Landes seized the initiative and set up his own business, with just a single sewing machine and tailoress in his initial employ. Yet sheer hard work and application to the cause ensured that the business grew (within weeks Landes had secured his first order for a handmade outfit, receiving the princely sum of 10 Guineas in exchange), and by the 1970s the husband and wife team numbered a workforce of over 50 staff, and what’s more, supplied their bespoke (ladies fashion) goods to Harrods amongst other high end stores. Unfortunately as the decade drew to a close the demand for more elaborate, hand tailored clothes dwindled as fashions turned toward less structured, casual garments, which signalled the end of Landes’ interest and indeed, business. After 25 years successfully designing and making ladies clothes, Landes decided to chuck in the towel and retire, yet,bizarrely some might think, took it upon himself to reconnect with his first love – Plasticine.

Plasticine in time turned to more, how can we put this, mature sculpting materials, and eventually Landes arrived at the better received and more universally accepted, bronze casting which he still champions today. Working out of his small studio in Southport, Lancashire, Landes purchased wax and tools and began teaching himself the skills of a sculptor. Within a few months, he’d designed a collection of 8 sporting bronze trophiesin order to perfect his new found art and make ends meet so to speak. On this topic, Landes’ big break came in the early 1980s when a series of sporting trophies Landes had manufactured to celebrate the 1981 Open Golf Championship were exhibited at Garrards, the Crown Jewellers. On the back of this exposure, Landes quickly found his sculpture work in demand, attracting numerous new commissions and landing himself an array of important contracts to boot. From this juncture, Landes was introduced to a number of fine art galleries, and for the next 15 years worked mainly on commissions as he still does today.

Now residing in and working from his studio in Cheshire, Landes looks back on his career as a couturier as being key to him gaining this in-depth understanding and appreciation of the female form and its characteristics, which he hopes translates across the formidable bronzeworks on which he’s constructed an enviable reputation from in the realms of the contemporary art world.An entirely self-taught sculpture artist, Landes feels that much of his work has been subconsciously motivated and then physically engendered in his pieces by childhood memories, whilst his ballet dancer pieces can be tracked back to his back stage invite to the Royal Ballet. Landes is adamant that he sees what he does as a privilege, and finds solace and inspiration when he’s in his studio from classical music playing in the background, whilst fervently believing in the timeless elegance of romance and objects of classic beauty. The like of which he feels are overlooked courtesy of the hurried, hectic pace of life today and modern society on the whole.