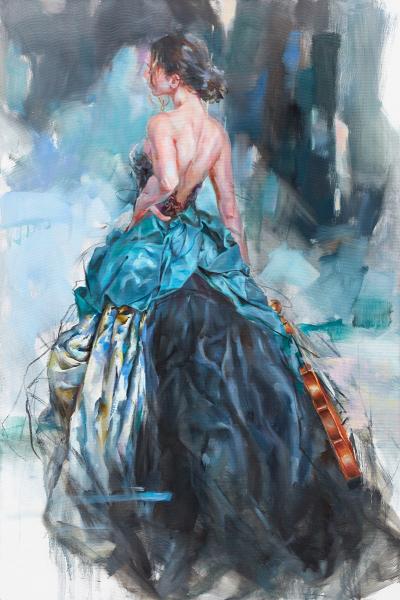 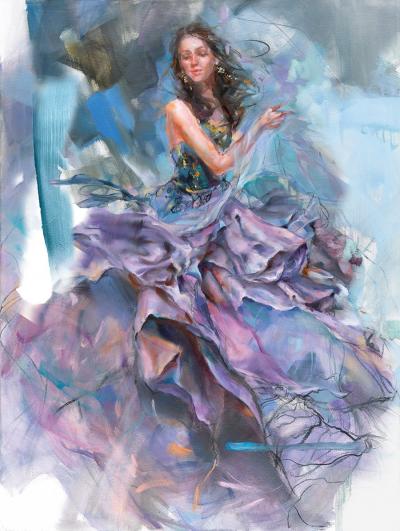 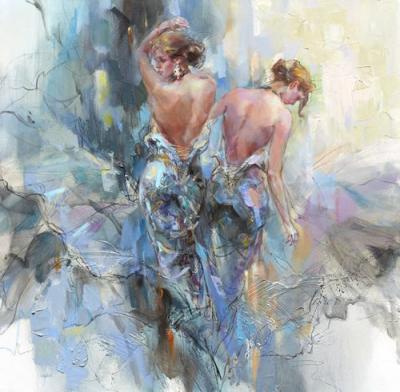 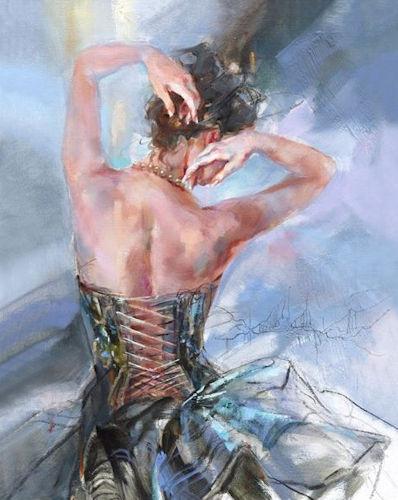 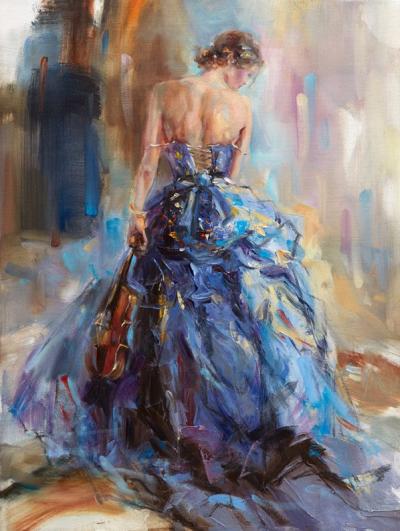 View All Art Works By Anna Razumovskaya
There’s not many of the current batch of contemporary fine artists who can touch Anna Razumovskaya when it comes to the exacting visual representation of the classic female form and function in oils and acrylics, and even less who can inject such a seismic sense of romanticism in those illustratively statuesque pieces. Russian-born figurative artist, Razumovskaya promotes a pictorial approximation of renaissance portraiture with a disarming depth and seemingly effortless persuasion, and although being influenced by the masters (such as Rembrandt, Rubens and Singer Sargent), Razumovskaya maintains an attractive balance of traditional and modern in terms of final product. Clearly inspired by the physical assertation of woman, in both graceful eventuality and provocative promise, Razumovskaya paints with an impassioned brush on a dynamic canvas, utilising hugely expressive colour swatches to convey every nuance and linear line of the beguiling female form.

A graduate of the Russian State University for Fine Arts, situated in Rostov-on-Don, Razumovskaya was handed the distinction of high-class artist in 1991 on the completion of her studies, before embarking on a tour of European seats of further education to continue and broaden her artistic education; enjoying periods of study in Germany, Belgium and Holland between 1992 and 1995 as she evolved as an artist. Since turning professional Razumovskaya’s work has been met with universal approval within the contemporary art scene, with her signature compositions finding homes in private collections located across the globe, including America, Canada, Holland, Austria, France and Australia, whilst also being the subject of numerous solo exhibitions in prime venues in New York, Toronto, Amsterdam, Antwerp and Berlin to date; ultimately helping Razumovskaya to become acknowledged as one of the leading artists within her genre today.

Razumovskaya has been privy to diverse backgrounds during her formative years which she took in her stride and evidently helped to shape the style and artistic deportment that she habitually presents here and now in her accumulative works. Despite being born at the height of the Cold War, Razumovskaya experienced the sophistication and femininity that permeated from her mother growing up, who instilled a fascination with fashion in her which she’s carried through her own life and which is harnessed in her pictorial works. Razumovskaya found herself in her element at art school and revelled in the freedom of first learning, then perfecting her technique through a selection of media. Razumovskaya’s European travels, whereby she soaked up the influences of artists past and present came to an end when she decided to put down roots in Canada, a country she now considers her true home.

Razumovskaya insists that her art is an illustrative reflection of her life, choosing to draw and paint quickly, easily and brightly, suggesting that she paints what she feels and from that perspective her portraits are by virtue of mood-enhancing materials and mediums, an extension of herself. There’s no doubting that Razumovskaya captures the very essence of her being through her personal art, and more than that projects a joy for life in every piece visually constructed. There’s also this all-consuming sense of female strength, yet combined with a vulnerability which shines through stock Razumovskaya pieces, which marks the artist’s work out in a busy marketplace. When addressed on the subject, Razumovskaya insists that she aims to paint things which are beautiful, and moreover things which make her happy
Razumovskaya’s figures, whilst themselves rendered with finesse and lavished with expansive details are contrasted by stoically impressionistic backdrops which outline and highlight the core subject matter with a greater luminosity and sense of pictorial purpose.

Razumovskaya prefers to place her muses in reflective states, whether they’re dancers in languid motion or relaxed contemplation or indeed musicians in repose with instruments. On settling in Canada, Razumovskaya talks of adopting very bright, bold colours for the first time, which coincided with this feeling of being free in her life, whilst latterly she’s worked on accomplishing the self same compositional effect by utilising just a handful of colours; and distancing herself from dark jewel tones to more monochromatic palettes. Razumovskaya explains that it’s easier to engender and foster an ambient sense of drama through vivid colours, whereas it’s seen to be more of a challenge when adopting the same principles with more naturally settled hues and saturations. At this juncture the visual stimuli must emanate from forms, textures and shades according to Razumovskaya.