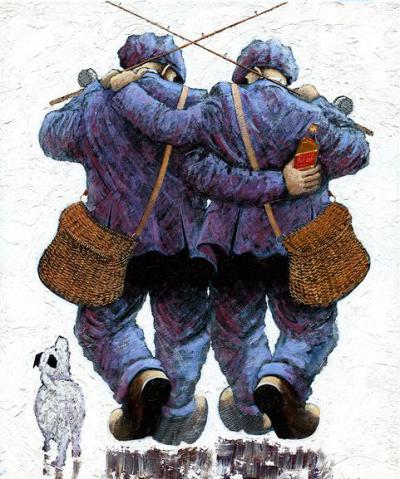 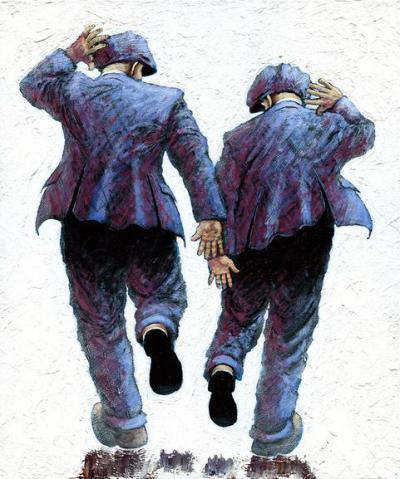 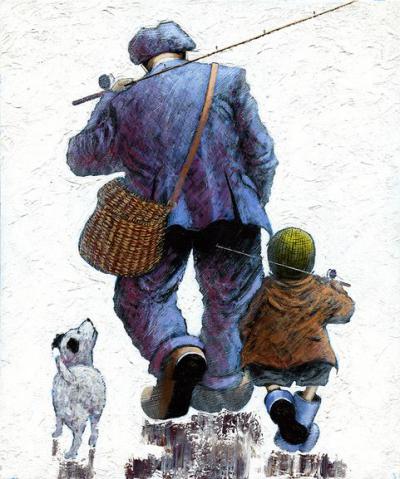 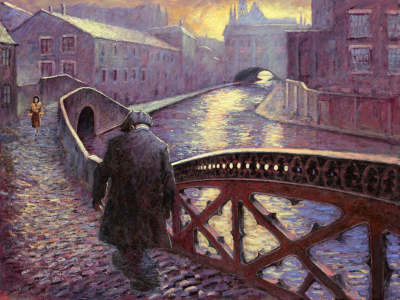 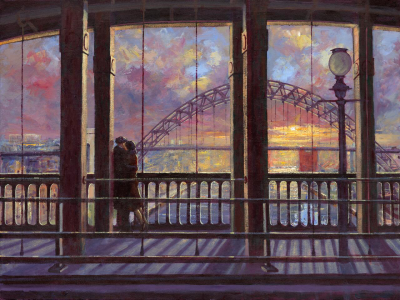 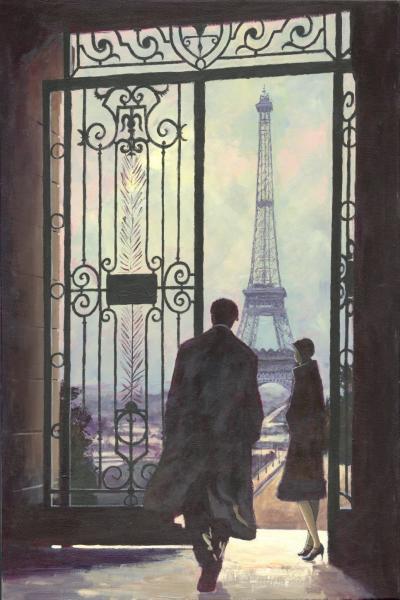 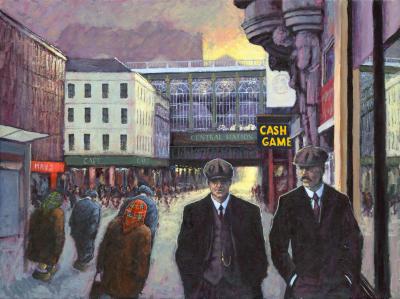 View All Art Works By Alexander Millar
Old ladies exchanging chitter-chatter on street corners, that exhausted old man plotting his coordinates homeward after a long, hard day or that little dog marking its territory on the lamppost in the middle distance. These images and much more beside provide the perfect visual backdrop to contemporary artist, Alexander Millar’s trademark creative works, as he concentrates on pinpointing the rudimentary everyday occurrences that populate life on Tyneside. And the North East in general. Or any other provincial northern townscape as a whole for that matter. These ‘Gadgies’ as they are collectively referred to as in the North East of England, are essentially barrack-room lawyers, street philosophers, braggards and occasional drunkards. They could be young or old; the former found smoking on the back of a bus or kicking a football against the shop shutters. In olde English, a Gadgie is a bloke or a geezer. A friend of a friend, the name of whom you’ve forgotten or never knew in the first instance. A casual acquaintance. These Gadgies are a constant stream of visual inspiration for Millar, as he readily admits to being surrounded by them from an early age.

Born and bred in a small, traditional Scottish village on the west coast in 1960, Millar met with the company of well-rounded characters from day one, and was immediately exposed to more examples on leaving school, upping sticks and decamping to Newcastle-upon-Tyne in the late 1970s, where he witnessed fascinating individuals at every turn. Holding down various jobs in the meantime, it wasn’t until 1988 that Millar turned professional as an artist and set about making a name for himself in this creative arena. Addressing his work and Millar’s unique style is immortalised in his visual dramatisation of these Tyneside characters, all oversized shoes and shoulders that symbolize the industrial age that the North East was synonymous with at the time of Millar’s artistic birth.

To a man, woman or child, Millar’s figures typically cast long shadows, with faces staring into the yonder and further distorted by shadows, which is said to be a pictorial metaphor for the ‘faceless’ overlords running the steelworks and shipyards at the time. Negativity aside, these figures would often be offset by powerful, telling sunrises, alluding to a brighter future on the one hand, yet also hinting at the perpetualness of the incessant working life and the likening to a Groundhog Day. Capturing the essence of Millar’s Gadgies either at work, rest or play is nearly always fraught, as often animated characters that illuminate the city, use the town centre as their stage and live their lives through continued street opera are notoriously difficult to pin down for the sake of art. Sudden movements, gesticulation and amateur dramatic overstatement are the norm for these folk, which means Millar struggles to catch them in steadied pose and will on occasion creatively, liberates them with artistic license.

When questioned as to his average studio day, Millar stresses that in theory it commences at around 9am, although confirms that the required discipline to instil this is not always in evidence. In the direct aftermath of staring at the canvas for a while the artist will endeavour to introduce and combine colours on his palette, which he eloquently describes as being a beautiful large kidney-shaped one, hewn from solid mahogany and being something of a joy on which to blend his elected colours. Explaining that he prefers to work by a natural light source, Millar will often be found sat outdoors painting, irrespective of temperature, with classical musical playing in the background and a glass of wine, whisky or preferably stronger, like Earl Grey tea close at hand to lubricate the creative mind. Residing in a small stone cottage in a picturesque corner of Northumberland, Millar admits that between each layer of paint committed to canvas he’ll willingly go for a wander in nearby fields to clear his head and mentally clear the decks for the next phase.

Millar subscribes to the theory that this process serves as inspiration for the artistic journey that lies ahead, and the manifesting of a creative flow is summoned from within when carrying out this routine, going as far as to suggest that this is the juncture in which inspiration enters the equation and the subconscious takes over, informing the painter to paint and both the protagonist and the finished article start to become one. Millar strives to make this precious time last as long as possible as when he’s in this ‘zone’ he’s able to produce a great number of canvases with the minimum of effort; knowing that the moment this latest creative spark wears off it is then time to embark on another long walk.