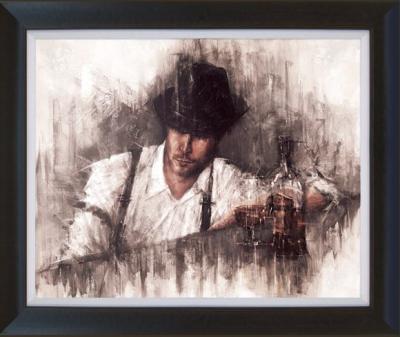 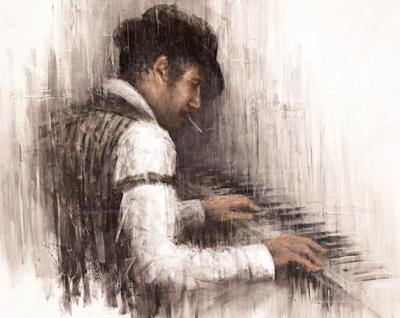 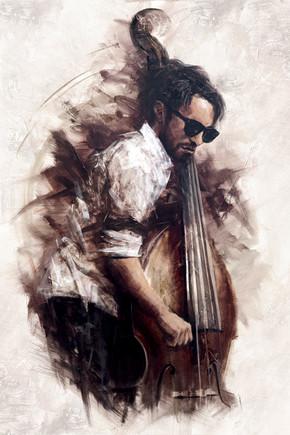 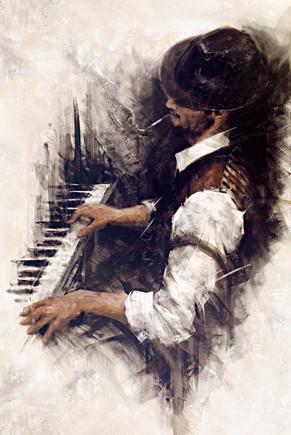 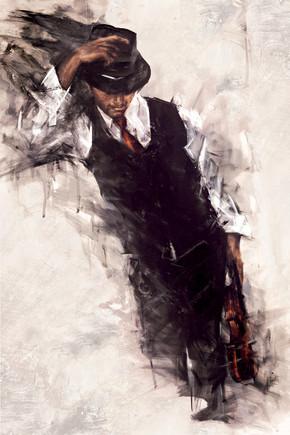 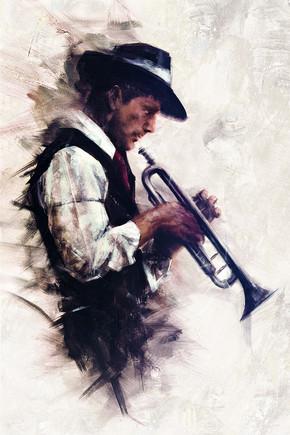 View All Art Works By Remi Labarre
We’ve all fallen for the lounge lizard somewhere down the line. The archetypal smooth, soulful operator who props up the jazz-fusion bar as day turns to night turns to day once more. Reeled in by the decadence and wistful melancholy of a blues ambience. Or is it just us? Well either way, celebrated contemporary figurative artist, Remi Labarre has us under his unswervingly romantically artistic spell, and has done now for a while, courtesy of his signature style which evokes a bygone era. Think piano bars, lounge acts and old-world cafes; the sort of twilight establishments that cater for all tastes yet masterfully generate the one uber laid-back aura. Labarre himself describes his enigmatically-expressed oils as ‘painted songs’, and to our mind if a singer/songwriter of the calibre of Tom Waits were a brushsmith rather than a performer, we’d hazard a guess that his work would look pretty much like this.

Influenced by John Singer Sargent, there’s no escaping the fact that Labarre’s trademark work reflects the lighting of hushed environments and presents poetic narratives of life after dark in bars and clubs. Yet it’s both the opulent magnificence and simplistic splendour of his somewhat brutal brushstrokes which first grabs your attentions, and moreover the manner in which he hacks out just enough background to ‘finish’ the piece; thus visually engineering this wonderful tension between the foreground and background. It is this unfinished, yet stylistically appropriate, look that brings the images to life. Labarre’s self-styled ‘painted songs’ are an illustrative legacy of his own personal observations and life experiences, and draw from everything from a cast glance between a random man and woman at a bar and the drink that changed everything, or the musician who witnessed the entire chapter and verse from the stage.

Born in Thetford Mines, Canada in 1977, Labarre was a prolific drawer and painter throughout his childhood, and as kidulthood turned to adolescence he essentially taught himself the technicalities and every nuance of the artistic path he’d chosen to walk down. Somewhere on his journey through childhood a friend – who also painted – suggested that Labarre experimented with paperboard as a medium, which he duly obliged. A few brushes and a few colours later in September 1994, the painting dried and provided the inspiration for a future calling. Spurred on by his audacious and sheer joy of the subject, Labarre’s absolute love for painting shines through to this very day and is projected through each and every piece which he pictorially conjures up. Now based in Montreal, Labarre’s heightened works elaborate on nostalgia and present poetic junctures from situations and interactions which he’s been privy to, be it in his native Montreal or elsewhere on his travels. Indeed, travels which have taken in the wonderment of Paris, San Francisco and New York.

Aside from Singer Sargent, Labarre’s influences include Richard Schmid, Fabian Perez and Jack Vettriano, and whether they’re portraits or still life, his canvases reflect the lighting of hushed, sensual environs which more than hint at the inspired compositional presence of the aforementioned fine art exponents past and present. Citing one of his greatest artist moments as being aware that famed singer/songwriter (and voice of a generation), Leonard Cohen and his entourage appreciate and own Labarre’s bespoke portrait of the iconic musician, the contemporary painter adds; “The greatest compliment I get is when people actually come to me and say they hear the music playing in the painting while looking at it”.

Labarre’s individual pieces and themed creative series’ can be discovered in collections throughout Europe and America, whilst his work has been showcased in countless group and solo exhibitions on both sides of the Atlantic. Labarre’s work has also coveted many column inches both here in the UK and elsewhere, with the artist’s impressive portfolio gaining prominence in galleries far and wide. Labarre’s premier UK collection featured a breath-taking quartet of musical portraits which were said to represent an atmospheric homage to his great love of jazz.