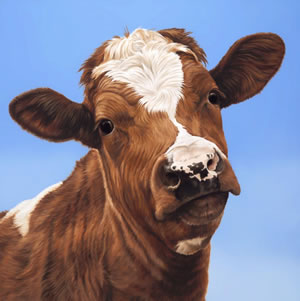 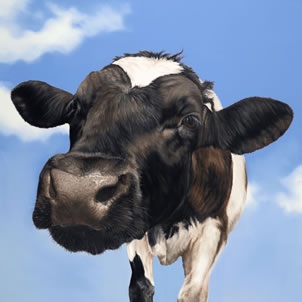 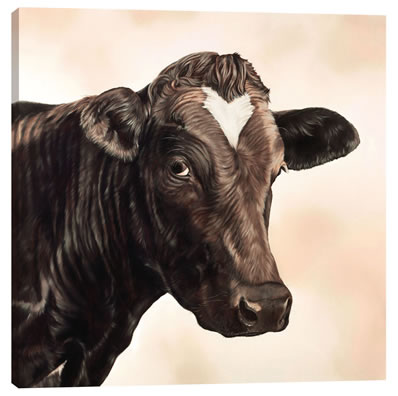 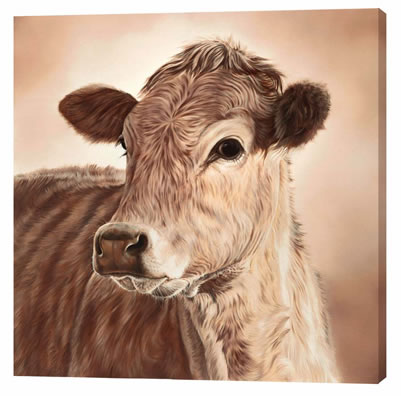 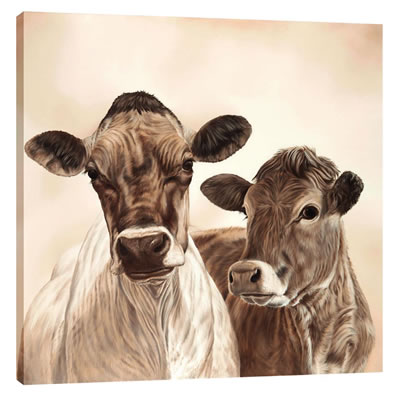 View All Art Works By Toni Hargreaves
‘Artist painting contemporary, funky cows with the odd smattering of sheep, pigs and donkeys in oil on canvas..for money!’ As selling copy goes, that pretty much nails it in but a single sentence. Well, that’s what the artist does according to their Facebook page (we know, investigative journalism has never been easier). The artist in question, being the celebrated contemporary animal artist, Toni Hargreaves of course. And her matter of factness doesn’t stop there either. Whilst it’s surprising what people can do for love and/or money, it never ceases to amaze us just what people/lunatics/budding artists (delete as applicable) will do for a Vauxhall Chevette hatchback. Bear with us on this one.

Hargreaves wanted to upgrade her pensionable Datsun 120Y (a very old Nissan for the hard of hearing) with something a little more sprightly, and had set her heart on a younger, more upwardly mobile Vauxhall Chevette (considered very much the part at the time). So the artist undertook a spot of model making during her college semester to help fund the purchase – a feat she repeated during a college placement under the tutelage of Richard Neave; the renowned forensic sculptor.

On the back of this, Hargreaves concluded that she wished to pursue a career in medical illustration, which she duly did, and by the end of that course of study had made enough money in her spare time (from model making again, we assume??) to afford the purchase of a far more new found status appropriate, 11 previous owners Mark 1 Ford Fiesta. Ramming it full of her personal possessions at the time, Hargreaves accepted her first role as a Medical illustrator in Guildford, Surrey and headed off in that general direction to embark on her career.
Unfortunately we’re getting a bit ahead of ourselves here, as we’ve overlooked what went before. Which in Hargreaves’ case was art school, choosing as she did to study Technical Illustration at Blackpool and the Fylde College of Art in the North West of England. Although feeling this was a good as starting point as any, it didn’t take long for Hargreaves to feel creatively underwhelmed at the constant pictorial representation of various engine parts, and instead opted to change tack altogether and instead take up a course in Scientific Illustration. Swapping bits of random engine nuts, bolts, cogs and flywheels for fur, feathers and things with legs. And then came the stint in Guildford we prematurely mentioned.

Holding down the position with the medical publishing company in the guise of Medical illustrator for a couple of years, Hargreaves eventually had enough of the South East and returned to her more familiar northern roots in the capacity of a Freelance Illustrator, and signing up to an agency which would represent her during the foreseeable future. The illustrating of natural history books formed the basis of much of the freelance work she undertook at this juncture in her career, although this was balanced with forays into more lucrative advertising industry work, including the origination and design of a number of backgrounds for a TV commercial around this time.

In 1997 Hargreaves experienced a turning point in her career, when she was introduced to international wildlife artists who were exhibiting at that year’s British Falconry Fair. As the 1990s were ushered in Hargreaves witnessed the temporary demise of traditional illustrating in many fields and across numerous genres as the advent of computer-based illustration and digitised artwork took industries by storm and caught the imagination of the public – and more importantly – clients and businesses alike. This encounter with acclaimed wildlife artists resulted in Hargreaves deciding then and there to work exclusively in the composing of wildlife paintings, and it wasn’t long before she was gaining recognition for her work; culminating in selling examples of her originals at Christies auction house in London during their wildlife art auctions over subsequent years, which in the end led to Hargreaves being a listed artist with an enviable sales record.

Again however, and times and styles change, and in recent years Hargreaves appreciates and was well aware that the more orthodox wildlife illustrations she had been championing and turning out to much fanfare were nearing the end of their natural shelf life to a certain extent. Facing up to fresh challenges from the emergence of funkier, simpler contemporary work, with the adaptation of humour and quirkiness (so as to fill the walls of more minimalist contemporary urban living spaces) in place of the tried, tested and (admittedly) more conservative approach to animal art per se, Hargreaves went with the crowds. What do they say, if you can’t beat ‘em, join ‘em….
Working predominantly in oils on box canvas, Hargreaves elects to supplement this with a base application of acrylics for the perceived darker areas. With regard to her oils and the administering of it as a medium, Hargreaves uses Liquin which accelerates the drying time. Incidentally, the eagle-eyed amongst you may have noticed the monogram which Hargreaves seals each painting with, which appears to depict a cow’s head, which is created by using the letters from her first name. Clever, eh? Well, we like it anyway.

So, why cows is what most of you are probably going to ask? Well, although not steadfastly a painter of our bovine friends – Hargreaves also creates the likeness of sheep, pigs and donkeys should the mood (or commission) take her – she definitely shows illustrative favouritism toward them it would seem looking at her back catalogue of both individual pieces and collections. The fascination stems from when she was out dog walking one day, and the point at which she happened across a herd of cattle. Who in themselves were equally fascinated with said dog, and were doing their utmost to get a better view of it. The whole group looked like a scrum of rugby players to Hargreaves’ mind – on account of their black and white strips – which kinda inspired her to capture the moment. Firstly on her camera, followed up by this becoming her first of her new breed of illustration. Funky, fun and seemingly hip, which of course is where she now needed to be, artistically.