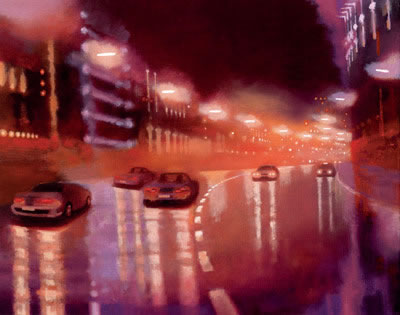 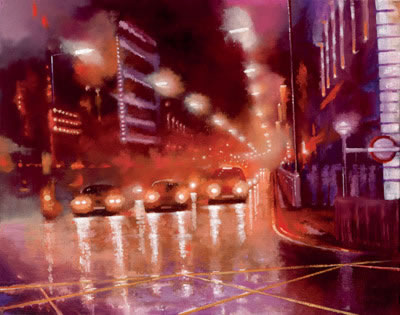 View All Art Works By Keith Fulford
Born in the UK’s capital city in 1962, acclaimed contemporary landscape artist, Keith Fulford has made creating unique visions of his native London a literal (and very much visual, obviously) art form since turning professional. Which just for (this) record wasn’t quite as early as those close to him might have anticipated. In spite of showing demonstrable talents in the field of drawing and painting during his childhood, Fulford was eventually coerced by his school teachers into pursuing what was considered a more ‘secure’ career when the time came to make the appropriate decisions. Rather than art which was still thought to be a bit ‘hit and miss’ in terms of an actual career choice. That career into which Fulford made his vocational debut was that of furniture and product design; so not entirely light years away from the arena of fine art.

But for all this Fulford has an artistic itch that he just couldn’t scratch properly by doing what he had subscribed to career-wise, and knew that much soul searching lay ahead if he was to be genuinely happy and fulfilled. So Fulford made the bold decision and quit his ‘secure’ role a few years in, choosing instead to enrol on a higher education course in art in a broader sense of the word. After bagging firstly a diploma in the subject, Fulford followed this up with a degree. Not content with just the two certificates he attended am MA course in Art and Design thereafter, specializing in the discipline of drawing. Whilst in the further educational thick of it, Fulford expanded his experience and personal skillset in the remit of art by undertaking independent freelance projects in the design-related industry to supplement his income as well as improve his employment prospects once he concluded his advanced studies.

When Fulford finally made his artistic break, at a time when he felt he could devote all of his energies to fine art and progressing within it, he had to settle on a direction, style and design language if you like which he could prosper in and ultimately become synonymous for. Fulford had for as long as he could remember had a passion for the vibrancy and hustle and bustle of city life, combined with a love of cinematic imagery. He chose to capture the core elements of the cityscape with his stunning use of oil paint, which Fulford believes interprets the visceral excitement of urban existence with a fluid illustrative response like no other medium. Like the films he loves, Fulford’s paintings are brimming with animation and drama and recreate the atmosphere of a city night with accuracy and panache. But Fulford is not just a city lover, as he’s equally as pictorially at home painting the likeness of enticing countryside vistas and enigmatic rural landscapes as he is picturing the sprawling metropolis and concrete jungle of London. Or any other city for that matter.

When questioned on his own commercially-savvy artistic journey, Fulford uses the phrase, ‘the long way round’ to describe how he arrived at where he now finds himself – as a successful contemporary fine artist - today. Citing the staggered way in which he came to be a bona fida artist, Fulford considers that this has not been a negative route, indeed the contrary, as he maintains that crucially, his artistic integrity has been in evidence every step of the way. Lending clarification to this thought process, Fulford insists that rather than studying fine art and attempting to invent interesting, unique concepts so as to make him stand out from the crowd, his inspiration and motivation behind it, blossomed slowly, forming a gradual process, from which his eventual style was borne and evolved; as opposed to it being a rushed and/or contrived series of events.

Returning to his beloved London and his visual encounters with its many elevations, Fulford comments; “The city has two conflicting sides to its personality – reflective and mysterious on the one hand, but bold and theatrical on the other,” adding, “I love to take this intriguing duality and find within it the grain of an idea that will both engage and uplift people”. Fulford’s work has been showcased near and far, finding high profile and much sought after wall space at a variety of prestigious events and galleries across the UK, while also completing some impressive private commissions to boot. In addition to this, Fulford has overseen many of his limited edition print runs sod out when released as new pieces, either individual studies or collections.