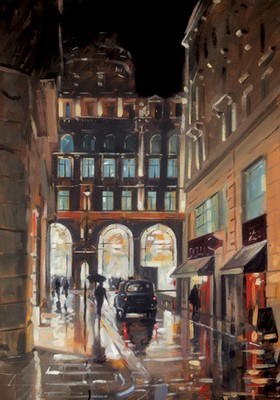 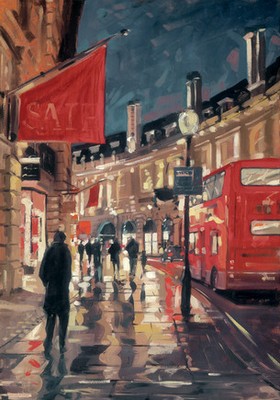 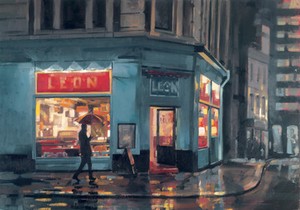 View All Art Works By Charles Rowbotham
Contemporary artist, Charles Rowbotham benefits from a robust and almost clinical fascination with people on the street, and more pertinently, their interactions – however circumspect and seemingly trivial to the casual observer – with their immediate surrounds. He can’t help it. And nor should he attempt to stymie it when you discover his very visual translations of all which he sees around him. Ever-changing, transient, altered imaged cityscapes prove inspirational to many an artist, both of a traditional bent or more modern, yet Rowbotham revels and rejoices in envisaging the metropolitan lives and loves, trials and tribulations through the eyes of those experiencing right there and then. More on this later, as first we take a look at the man behind the art.

Rowbotham coaxed and cajoled his brushes and experimented with materials and mediums throughout his teenage years, more than likely encouraged by his parent during his formative years as he displayed potential in both his drawing and painting, both of whom are recognized artists in their own right. He was brought up in a house dominated by art and always dreamt of becoming an artist, but knew that the road to achieving his ambition was likely to be fraught with hardship. Despite this creative upbringing, Rowbotham chose to follow a far more rigid and mathematical path of higher educational enlightenment, studying architecture at Kingston University in London – in which he was born and bred – from where he graduated in 2008. However Rowbotham disliked the rigidity of working for a large firm so decided to paint in his spare time as an outlet for creative expression. As it happened, this grounding in approaching subject matter with all eyes on perspective and elevations proved to be a useful learning curve as Rowbotham eventually returned to his first love in which to carve out his fledgling career and ultimately make something of a name for himself in the process. Something else which Rowbotham is acutely aware of and employs with will is to resist the temptation of harnessing his parent’s own artistic influence in his works, subconsciously or otherwise, and strives to adapt a resolutely individual approach and material application from the outset.

Speaking on this very approach to his work, Rowbotham is quick to point out that he uses his own photographs as reference and starting points, so as to capture the essence and fleeting moments in time that he will then in turn replicate via his own mediums and visual projecture. In Rowbotham’s own words, the artist concurs; “Drawing upon inspiration from the human form, I want to recreate the beauty of figure onto canvas whilst using a variety of backdrops to create the story”. Continuing these themes, he concludes; “Often the greatest visual pleasure comes from the most minimal number of brush strokes”.
As touched on earlier, Rowbotham is never happier, and indeed more inspired and challenged as an artist, than when he’s dipping into the street life around glamorous, cosmopolitan cities found in the Northern Hemisphere such as London and Paris. With an excitement of regularity the artist delves into the cafes, bars and theatres, as he walks for often hours at a time, searching for that one, evocative, decadent scene that plays out, momentarily as the world goes on around its little time bubble. People watching is Rowbotham’s forte, and he readily admits that he sees us all as muses, being the social creatures that we are.

Expanding on his beliefs and mantra, Rowbotham insists that there’s no better time to capture these transient dalliances and microcosmic brief encounters than at night, decreeing that twilight affords him, as an artist, a vibrancy and luminosity in hiding during daylight hours. Citing the manner in which shops and other nocturnal and commercial establishments project their superficial light onto the streets as instrumental to his forming of reflections and shadows upon his subject matter, Rowbotham feels that evening interactions afford him more dynamic human interfacing and visual snapshots, adding more than a degree of verve to his pictorial affairs. Naturally, painting under the cover of artificial light is challenging, and Rowbotham works with a warm palette to embrace and enhance the presentation of silhouettes of which there are many, along with reflections of every imaginable shape and size.

Reeling off his influences, Rowbotham talks of film being pivotal to his organisation of a painting, and the underlying way in which celluloid takes us to another place we seldom would otherwise be privy to. The artist suggests that he merely paints an informed stage and set, and that the viewer affords the painting and its lead character a million and one script variations and indeed hint at the following, unpainted frames and how the story pans out. Leaving no paper trail to determine just who his movie-making idols are, Rowbotham casts the opposite when mentioning art icons when bearing witness to the following; “Monet talked about there being a ‘cushion of light’ between subject and it being such an important dynamic when understanding perspective and subtle variations in colour/tone. He reminds me to paint what I see and not what I think is there. Knowing I may never recreate the way that Singer-Sargent captured his figures or the beauty of Whistlers Nocturnes, it helps to have something to aspire to”.

Selling his first painting gave Rowbotham such a buzz that he decided to put together a small exhibition. After a sell-out show Charles realised that there was potentially a career ahead of him. He went on to rent out a studio where he began to develop his ideas and forge his own direction. His vibrant impressions of café society and late night city streets have appeared at series of successful solo shows in London. He has also enjoyed a superb joint show with the country's leading impressionist artist, Sherree Valentine Daines at Clarendon Fine Art in Mayfair.