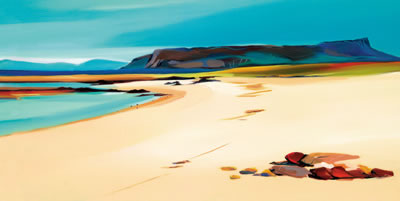 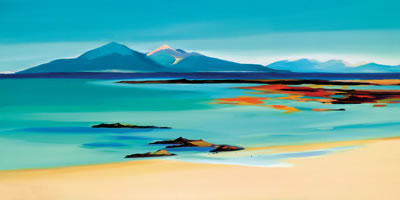 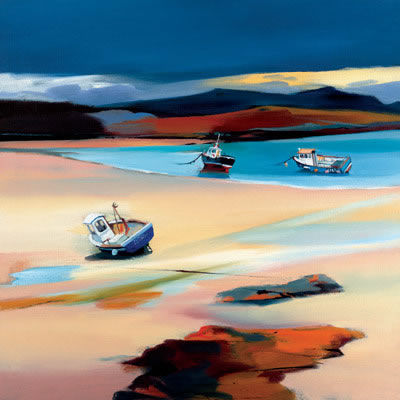 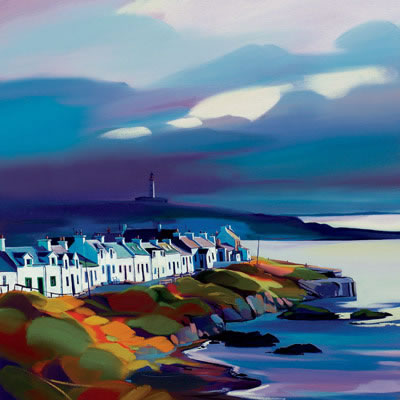 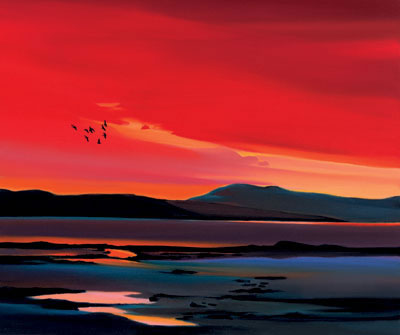 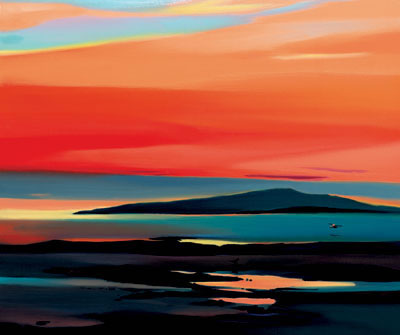 View All Art Works By Pam Carter
Working predominantly in bold, vibrant and pictorially empowering oils, celebrated contemporary landscape artist, Pam Carter should be on the payroll for The Scottish Tourist Board; or its Hebridean Islands off-shoot, such is her passion for the picturing this stunning stretch of sea-straddled land breaks. Gregariously coloured pieces which encompass rugged yet serene coastal life characteristic of this often remote area of Northern-most Scotland are Carter’s illustrative stock in life, and there’s no disputing that nobody comes close to her artistic achievements on this front, whilst it’s crystal clear to determine just how much this dramatically-horizoned area means to Carter. In Carter’s own words, she stresses; “My main inspiration is in the Scottish land and seascape. I enjoy using colour to define contours, structure and changing light sequences. I search out specific viewpoints. I am equally inspired by the rugged isolation of the Western Isles and the dramatic view points of the Eastern coastline”. Which is all a far cry from where Carter was born and – up until the age of 13 – was brought up. Although having said that, her birthplace did share visually arresting vistas all of its own with the Outer Hebridean islands which Carter’s become synonymous with capturing, albeit for very different reasons.

Despite the sea being seemingly in Carter’s blood, she was in actual fact born and raised on the plains of East Africa , in Tanzania, and spent her formative years in Arusha, a town which falls under the spell and shadow of a perfectly-formed and shaped mountain. Indeed, said mountain is owed a debt of gratitude by Carter for first inspiring her to paint, in the aftermath of observing a man sit before its natural majesty with his easel and paint box and construct its visual likeness in front of a young and impressionable Carter. Whilst Carter’s mother was of Austrian nationality, her father had been a native of Glasgow, and in her early teens the family moved to the Scottish city, famed for its shipbuilding and heavy industry, where once she’d completed her rudimentary secondary schooling, Carter elected to attend the Glasgow School of Art thereafter. Mastering draughtsmanship and paint techniques, Carter excelled at creating mostly still life studies, as landscapes weren’t possible due to lack of immediate access to the countryside from Glasgow, although occasional field visits to Culzean Castle on Ayrshire coast took place, which again duly inspired her. But as it was, and for the large part, Carter’s early compositions centred around what she considers to be ‘typically Glasgow’ scenes, all misty grey and fairly sullen affairs.

After graduating, Carter choose to follow a career in teaching, which she pursued through the 1970s, during which period she then took a gap year to study in Chicago, following that up with a move to the Seychelles to teach art for a further two years. It wasn’t until 2004 that Carter eventually embarked on a full time painting career. It was the whilst spending time teaching in the Seychelles which really made Carter look at the world of colours and clear lighting from a whole new perspective. There she painted beaches, turquoise waters, large leafed undergrowth, shacks and colonial houses with a vim and colourful vigour which she’d previously not been able to explore and experiment with, and which essentially announced her arrival as an artist in retrospect.

Returning to Scotland not knowing how to pursue and essentially do justice to her newly discovered illustrative and graphical angles, Carter went to the Botanic Gardens to gain tropical insights and hopefully perpetuate what she’d started in terms of a mind-set and approach to her art work while in the Seychelles. Thankfully these inspirations led Carter, both emotionally and physically to travel up the east coast of Scotland, and to ultimately discover the Hebridean Islands that have gone on to symbolise her body of work to date. These beautiful Scottish islands helped fire Carter’s imagination once more, as she committed to canvas these isolated sweeping sands, bright waters and fisherman’s crofts which characterise the region. In fact, the latter feature prominently in Carter’s paintings and to a large extent define her work.

Addressing her approach to each and every individual composition or collection, Carter adopts the same theory and practice, ensuring that she sketches and photographs subject matter at source, before even entertaining the notion of returning to the studio to compile this very visual evidence, pictorially. Carter admits to taking literally hundreds of photos in a multitude of different weather conditions and opposing times of day and from countless angles to determine the reality of the subject matter, and more pertinently these arresting Hebridean vistas of such Western Isles as Orkney, Arran, Bute, Islay, Skye and Rum to name but a few.

To this day, Carter’s work forms part of numerous private and public collections, including The Royal Bank of Scotland, The University of Liverpool, Baillie and Gifford, Cameron House, Port Charlotte Hotel, Islay and Hotel Eilean Iarmain, Isle of Skye.