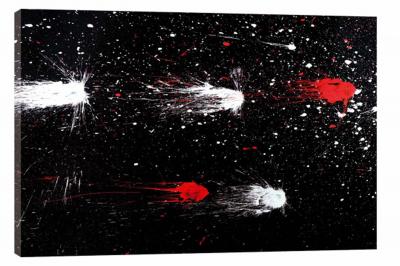 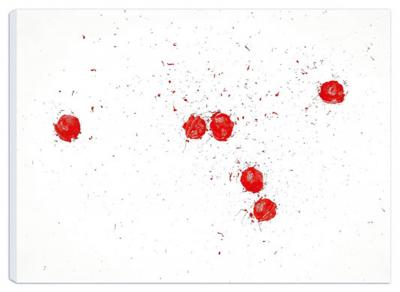 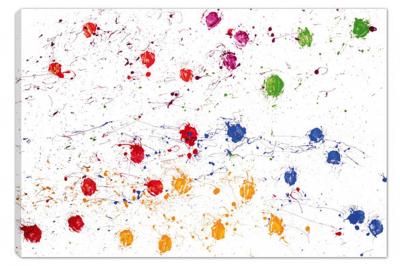 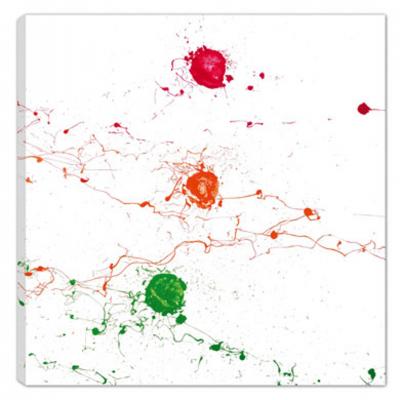 View All Art Works By Michael Vaughan
The name Michael Vaughan may resonate with cricket fans of a certain vintage, on account of him being the batsman and captain of the England cricket squad who at the time (2005) led the team to Ashes victory over the old adversaries, Australia after many years in the cricketing wilderness so to speak. Whereas to everyone else, let us introduce to you, Michael Vaughan the contemporary artist. Yes, Vaughan’s back, although now no longer wielding a bat in anger (more as a creative language), but rather a paint-rolled ball which he subsequently bowls at a blank canvas to create his unique compositions. We kid you not. The technique that the former cricketer has dubbed, ‘artballing’ witnesses a unique applicative process involves the introduction of said symbolical paint-covered balls with the distanced canvas at speed and a pre-defined trajectory at the hand/arm/wrist/bat of Vaughan himself; thus resulting in this very abstract form of art.

According to Vaughan his love in art was first kindled in the early part of the 2000s, when accompanying his then England team-mate, Ashley Giles, on sorties to Shoreditch-based art galleries in London, whenever rain delayed or postponed test matches held at the world famous Lords cricket ground in the UK’s capital city. What Vaughan observed ignited his passion for abstract expressionist art and fuelled the concept of fusing together what he very much considered two art forms; the obvious ‘art’ and, perhaps the not so obvious one, cricket. ‘Artballing’ also provided a sort of therapy for Vaughan, and something he’s touched on since, admitting that after an emotional retirement from the game he loved at international level, there was a huge void left in his life that needed addressing. It just so happened that launching paint-covered balls at over 100mph at a large white canvas in a Derbyshire warehouse helped to bridge this gap.

Apparently the concept itself was dreamed up in the unlikeliest of ways, when Vaughan was sitting watching the inexplicably popular ITV1 celeb/reality series fronted by TV’s Ant and Dec, ‘I’m A Celebrity, Get Me Out of Here!’ along with business partner and friend, Guy Brown. Discussing a similar art project which one of the contestants on the show (Tennis’s Martina Navratilova as it happened) had involved herself in, using tennis balls, the two of them thought it would be both a bit of fun and an interesting proposition to recreate this whilst deploying traditional cricket equipment. Vaughan takes up the story by adding; “I have a friend who owns an industrial unit in Chesterfield, so we went there, created the prints and filmed the whole thing” going on to intonate; "It's created quite a bit of interest – and we're now hoping to try the same idea using cricketers, such as Flintoff, as well as footballers."

The cricketer-turned-artist feels almost blessed to be able to combine his two loves in such a creative fashion, and has added another colourful chapter to an already rich and diverse life in Vaughan’s eyes and anyone else who has followed his career closely over the years. Vaughan describes in near-animated tones how artballing ‘captures the drama, speed and excitement of cricket in one precious, dynamic visual moment’ which he concurs lasts a lifetime in canvas, unlike the physically-executed perfect six experienced so very briefly and transiently out on the field of play. The former Yorkshire county cricket star explains how he favours the cover drives, square cuts and pull shots, in terms of ball delivery (something for the cricket aficionados and learned scholars of the game we fear) so as to visually manifest his innovative art collection, and to ultimately ensure that the finished composition is more hit than miss.

Entitled, ‘From Crease to Canvas’ Vaughan’s seminal collection comprise his ‘Day/Night’ pictorial reveal, whereby he set white and red-coloured balls against a black backdrop alongside of Vaughan’s ‘Yes, No, Maybe?’ piece which features red, orange and green ball/paint/bowling combos to illustratively establish the symbolic traffic light colourations historically associated with stop, go and indecision. Vaughan’s brand of action painting (and therein by default, abstract exhibitionism) follows in a long line of practitioners in the frenetically-executed art which gained prominence and popularity between the 1940s and 60s, including most notably, Jackson Pollock, yet also having in the ranks of the same movement, artists such as Norman Bluhm, James Brooks and Grace Hartigan.