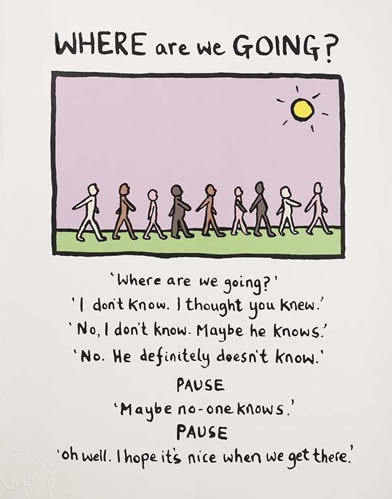 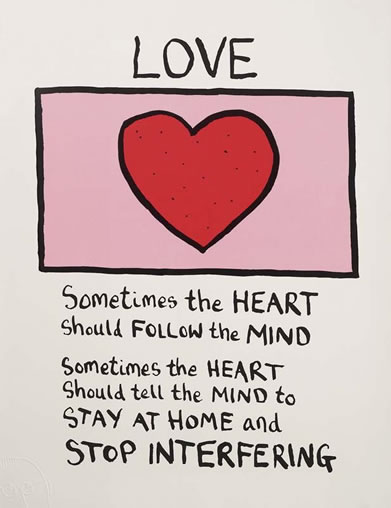 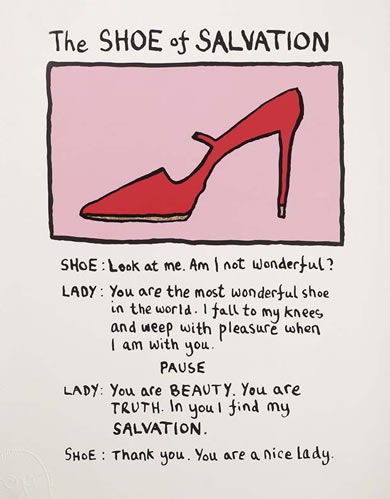 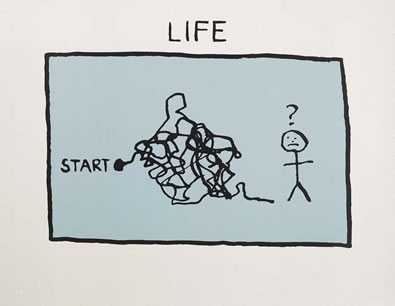 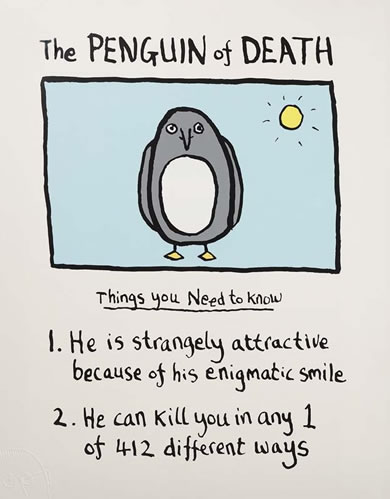 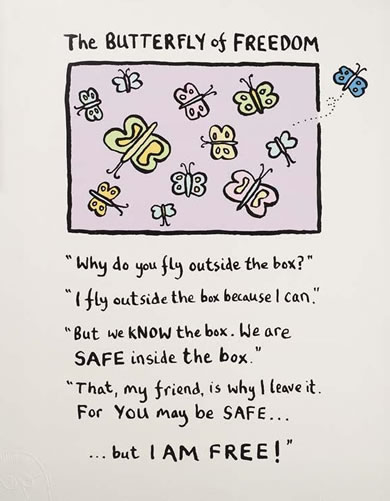 View All Art Works By Edward Monkton
With greetings cards, t-shirts and various other merchandise to his name (or rather that of one of his most iconic/successful ‘artistic’ creations), Edward Monkton is the man behind the hugely phenomenal (other superlatives are available) series of cartoons featuring ‘Purple Ronnie’. Although he isn’t himself to be perfectly honest, as that’s Giles Andreae, as Monkton is purely the pseudonym that he frequents. Yes, Purple Ronnie was/is the 7UP Fido Dido-esque stick man, an L S Lowry-type creation, only possessing a devil make care attitude. We say stick man, but Ronnie’s torso is pretty rotund tell you the truth, despite the ultra slim gait of his ensemble of limbs. Either way, he sports a smiley face and gets up to all sorts of animated adventures on all sorts of retail-savvy, money-making surface areas; and has done since the late 1980s.
So successful was Purple Ronnie that the Monkton-originated character with a knack for comedy, poetry and rhyming captions (with or without the inclusion of a mildly taboo turn of the vernacular), that he was selected as the new face of soft drink manufacturer, Vimto’s advertising campaign at the height of his animated notoriety.

Under his Monkton alter ego, Andreae has in more recent times invented several new cartoon characters; again many of which have translated with commercial ease onto a range of associated merchandise, a world away from the greeting cards from whence they came. You might have heard of them. There’s ‘A Lovely Love Story’ and ‘The Lady and the Chocolate’, in terms of book titles, whilst found amongst his actual lead characters are of course, ‘The Pig of Happiness’, the ‘Penguin of Death’ and our personal favourite here, ‘Zen Dog’.

Anyway, that’s enough about the almost the illustrative fruits of his graphic labouring, and what about the mythical Monkton himself we hear you ask. Probably. Or to be precise, Andreae, the REAL person behind the animated masks and semi-literary journey thus far. What’s he all about? Well, his background is equally as fascinating, and is one where he’s also overcome true adversity to get where he is today. Born in 1966, Andreae went on to attend Eton College at the same time as his one-time best buddie there, a certain Conservative Party leader and Prime Minister of Great Britain as it happens, David Cameron, this ISN’T the challenge that he rose to in his formative years, as that was all to do with his health.

On completing his studies at Eton, Andreae rocked up at Worcester College (as in the Worcester College that forms part of the proper posh Oxford University, as opposed to a Worcester College that may or may not exist in the Midlands, with respect), where he dedicated himself to study between the years, 1985 and 1988. That was when Andreae wasn’t courageously battling Hodgkin’s Lymphoma, a cancer which attacks the lymph glands and which normally requires intensive chemo and radiotherapy, as it did in Andreae’s case. But battle it he did, enough to sit his final exams and bag an upper second class degree.

On completing his university education against the odds, Andreae did that thing many well bred South Eastern born and bred types do, and headed off for a career in the city. And not the financially-biased, Square Mile destination, but the way more creative advertising agency one, where he started work as a trainee account manager. However, and what he failed to mention above, was that Andreae’s invention of ‘Purple Ronnie’ whilst at Oxford Uni, was about to take off, big time. Which it effectively did by the turn of the 1990s, when this breed of greetings card character/serialization served as a wholly refreshing change to what else was out there in Hallmark Land at the time. Which essentially was pretty lame and overtly safe and uninspiring to say the least.

Fast forward a fair few years though and Purple Ronnie can be seen peering back from a myriad of useable, family-friendly promotional surfaces, everything from beach towels, Post-It notes and mugs to jewellery, shower gel and book titles. And then there’s Edward Monkton, who, character-wise is the antithesis of the occasionally hell-raising, yet always vocal Ronnie; a whimsical, philosophical persona who offers an alternative graphical/literary view to the sentiments found on Purple Ronnie’s typical merchandise.

Today, Andreae lives in affluent Notting Hill with his wife and family, and is still friends with Cameron – being Godfather to the PM’s offsprings, and vica versa so we’re led to believe – whilst sharing an office space with two household names. Namely radio and TV broadcaster, Mariella Frostrup and hugely successful television and film writer and Comic Relief founder, Richard Curtis.