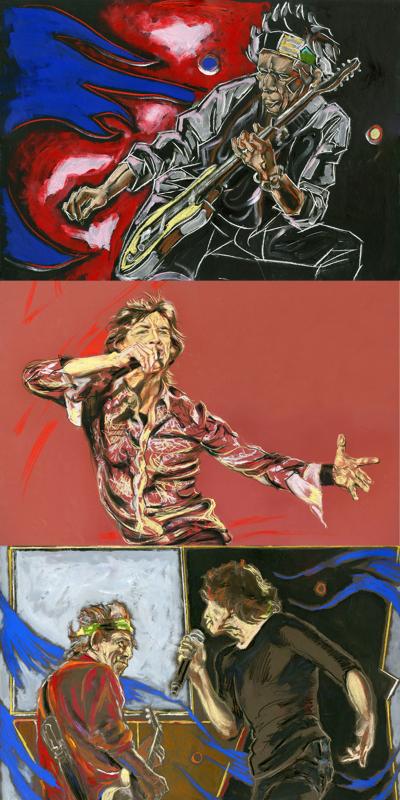 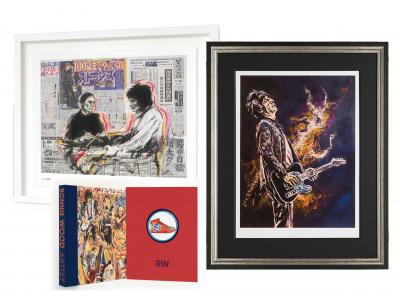 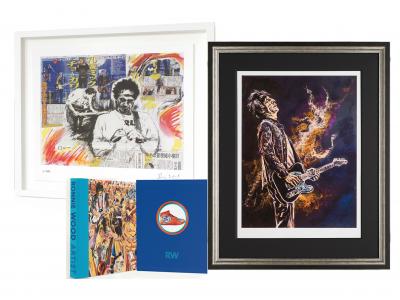 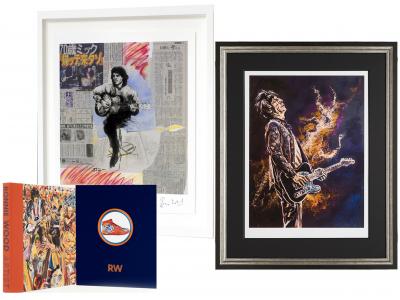 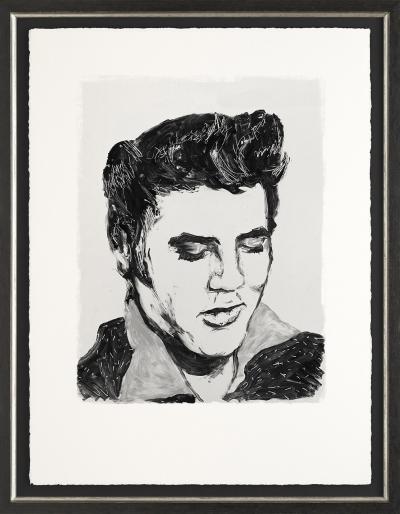 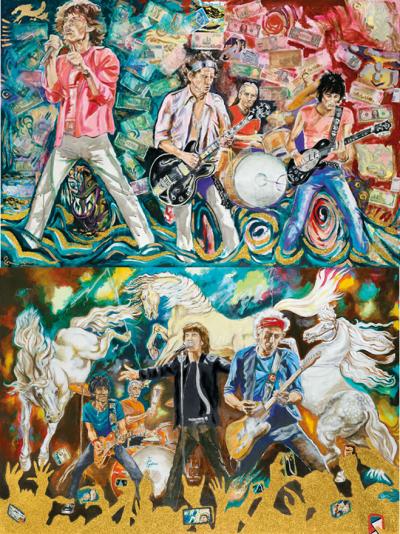 View All Art Works By Ronnie Wood
Born into a musical and artistic family in Middlesex in 1947, Ronnie Wood was painting and sketching ever since childhood and a long time before he went on to find fame and fortune as a member of one of the most iconic rock bands the world’s ever seen; The Rolling Stones. Forging a reputation as something of a wildman and maverick and finding himself subject to all manner of spurious rumours and hyperbolic accusations spanning the five decades that The Stones have remained very much in the public eye, Wood could always turn to his art as a means of escapism in his private life.

Having studied the subject in its broadest form at Ealing College of Art in London, Wood never lost sight of one of his first loves, and it’s remained an enduring passion of his over subsequent years as he’s pushed his own creative boundaries both on stage and behind the canvas. In terms of inspiration and subject matter, Wood has drawn and painted muses ranging from band members and musicians he’s admired at different times to family, friends and of course, a number of self-portraits; with figurative art his preferred forte. Those close to him admit that they’re just as likely to see Wood wandering around with a pencil in his hand as much as a guitar, although the later gives an indication to the art arena in which he’s most comfortable. That’s not to say that Wood hasn’t diversified his genre-appreciation and understanding in recent times, as he’s originated everything from landscapes and abstract to architecture and still life, and has also diversified his range of mediums in which he works. From charcoals, watercolours and spray paints through to oil pastels and acrylics, Wood has tried his artistic hand at all the main methods of material application.

It wasn’t until the early part of the 1980s that Wood decided to further his interest in art and take it to the next level, despite his day job still demanding much of his time as The Rolling Stones found favour with yet another generation of fans whose call to tour was always answered by Mick Jagger and Co. Back to Wood’s art though, and during this period he produced his first three prints, three woodcuts and a series of monotypes whilst holed stateside. This was all the more surprising as at that particular juncture Wood wasn’t what you might call an experienced printmaker, yet had always shown a keenness to learn given opportunity. That opportunity arrived in 1987 when Wood arranged to spend a few months employed in a professional printmaking studio in England where he received a comprehensive insight into the trade. A fervent believer that practice makes perfect, Wood thereafter made it his business to master the art of craftsmanship he received his crash course in, going on to manufacture a significant volume of images utilising various printmaking techniques, such as etching, dry-point, screen print and woodcut.

Citing the revered likes of Matisse, Van Gogh, Picasso and Schiele among his inspirations, Wood’s knowledge and respect for these old masters is evident in abundance when engaging him on the matter of those artists and movements that influenced him and continue to do so. Wood also, as hinted above, sees his art as tantamount to therapy and aware from the constant glare of the world’s media and consequent peddling of salacious revelations, Wood retreats into his compositions as a means of acquiring relative normality in his life. The artist himself is quoted as implying that there’s no kind of therapy like the one you have from starting and then seeing a picture through to its natural conclusion.

Wood’s collective works have been showcased on a global scale, both as part of on-going multi-artist exhibitions and his own, solo operations, and have been temporarily housed throughout Europe, North and South America and the Far East. Indeed, in 1996 Sao Paulo’s Museum of Modern Art in Brazil held a retrospective of Wood’s work. Closer to home, and in essence where Wood’s work has been afforded the chance to be seen by a still broader demographic of art lovers, serious collectors and critics alike, Wood’s recent collaboration with Washington Green Fine Art has ensured that a new generation of contemporary art followers will be exposed to his future visual outpourings, not least like his debut collection for the aforementioned art publishers. Entitled, ‘The Famous Flames Suite’, Wood’s inaugural four piece portfolio in conjunction with his latest collaborators sees Wood putting the musical antics of those he has a fair idea of under the creative microscope; namely his long-time band-mates, The Rolling Stones themselves. A fifth piece entitled, ‘Stones on Stage – Got Me Rockin’ is also available.

The very life-blood of The Stones in the midst of doing what they do best, gigging and performing live, is captured in full, majestic, strutting, swaggering, visually enticing flow by the man nearest to the action itself. A vibrancy and electricity cuts through the very core of the compositions, a full throttle performance beyond compare that Wood encapsulates on canvas with the same degree of vim and vigour that he commits to when strumming his trademark guitar. Rhythmic lines, vibrant colours and inch-perfect facial expressions, combined with a decadent synergy and brushstroke-perfect dynamic are all in canvas attendance, and all objectively worked into the individual studies first by acrylics, followed by oils and then, finally, robustly embellished with the provenance of oil pastels