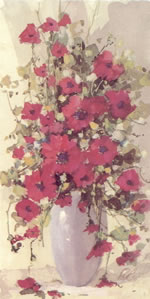 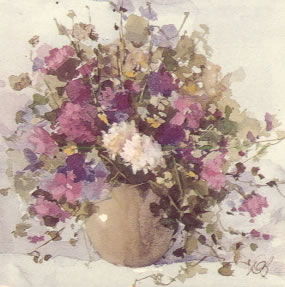 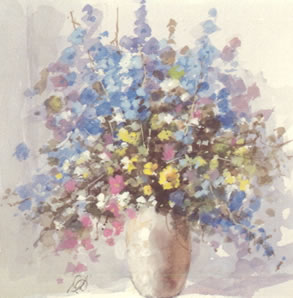 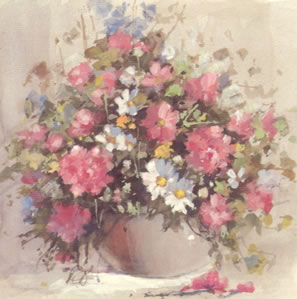 View All Art Works By Derek Brown
Flowers, eh. Van Gogh did them. So did Monet. And a host of other iconic artists. On such artist, who, arguably, isnâ€™t usually mentioned in the same breath as the aforementioned canvas-botherers, is Britainâ€™s own, Derek Brown. And let us tell you, Brownâ€™s flowers are immense too. Although it very nearly didnâ€™t happen, as fine artâ€™s potential loss may well have turned out to have been dentistryâ€™s career-long gain. Let us begin.

Born in London way back in 1924, Brown came to fine art as something of a second career, in the event, as, after five years of military service, he returned to higher education , electing to study and train to become a dentist. Which would have been seen as a more secure career around this time, to be perfectly honest. Brown applied himself and graduated as a dentist in 1952, and set about forging a career in this profession. However Brown had always had an interest in art, and these transient thoughts of what it would be like to paint niggled away behind the scenes for a while. That was until he sought help; and not the sort where you sit around in a circle with a group of strangers to introduce yourself and your hang-ups. Rather in Brownâ€™s case, the opportunity to scratch his hitherto dormant artistic itch.

With the help of the Heatherley School of Art, Brown developed his evidently natural and largely unrealised creative skills and seldom previously explored attributes. Largely buoyed by the revelation that he did harbour the components to practice his unbeknown art, Brown began moonlighting to explore and nurture his artistic prowess, whilst all the time continuing to carve out his dentistry career in the front of shop, so to speak. Around this time Brown met the acquaintance of renowned Australian Impressionist painter, Hayward Veal, who actively encouraged the Londoner to explore his typical landscapes and still lifes further, by adopting the use of oils as his favoured applicator. Brown noted that a good percentage of his artist inspirations experienced around this time were courtesy of initial exposure to them by Veal.

Brownâ€™s fascination with rich, opulent and diverse colour saturations and hues inevitably led to him experimenting with other, bolder and more expressive materials, such as watercolours and gouache, which eventually channelled and focused his subject matter attentions in the direction of floral themes; where vivacious colour has always been in much supply and demand. Ultimately the public face of Brownâ€™s trademark art is one which employs soft, almost pastel hints and tonal variations, engineered and illustratively presented in this lovely, innocent Impressionist style and delivery. His work is said to remind us - through his subtle blends and use of colours â€“ of traditional country gardens, which themselves would offer us such floral beauty and pictorial captivation from the outset, and as replicated in Brownâ€™s paintings, ultimately be enjoyed by many people at once.

When discussing his own visual work, Brown went on record as saying; â€œThere are many ways to paint flowers. Some artists refer to the botanical description of detail and their results are superb. My interest is in creating an impression to give the viewer the feeling experienced when looking at a vase of flowersâ€ going on to add; â€œA painting that always remind us of the pleasure lastâ€.

Brownâ€™s work has become and remains hugely popular and finds itself amongst many private collections, whilst exhibitions have aided and abetted his late blossoming art career, themselves growing to become a regular theme. Londonâ€™s Mall Gallery, the Guildhall Gallery and the Royal Institute of Painters Annual Exhibition, not to mention many other galleries throughout continental Europe have showcased Brownâ€™s work since he turned professional, and his paintings continue to catch the attention of both his followers and collectors as well as the critics, who always received Brownâ€™s work well over the years.