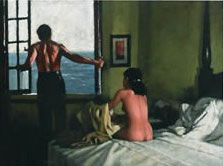 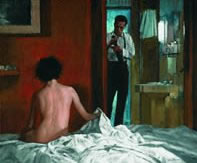 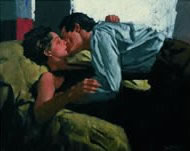 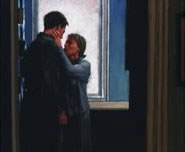 View All Art Works By John Meyer
Acclaimed contemporary realist artist, John Meyer has had the revered likes of Nobel Peace Prize winners, Nelson Mandela and FW de Klerk and renowned concert pianist, Vladimir Horowitz sit for their portraits, as he became known as a court painter to the rich and powerful. Indeed, Meyer might well have been 30 years of age when he became a professional painter, yet he wasted no time at all in rapidly becoming one of the foremost portraiture, landscape and narrative art exponents of his generation. Born in Bloemfontein in 1942, Meyer launched himself in the capacity of a professional fine artist in 1972 and didn’t let the grass grow under his feet as he toured the globe in his on-going search for creative inspiration, divinely inspired or otherwise.

Meyer has captured the likeness of diverse landscapes which characterize locations as far flung as Nevada to Norway, whilst he’s had his art showcased with regularity across America, Europe and his native South Africa, cementing an international profile which limited South African artists have shared over the years. The landscape and portraiture painting which initially affording him his name and reputation within the worldwide contemporary art community, has more recently given way to the visual advent of what Meyer’s dubbed the narrative art genre, whereby he establishes these enigmatic figures juxtaposed in somewhat emotional ambiguities, which represents a whole new angle of creative approach and accumulative pictorial attack to Meyer. In fact, since the 1990s and ushering in this brave new dawn in artistic direction, Meyer has focussed almost entirely on his narrative art, which is particularly fascinating to the casual observer when noting Meyer’s sequential narratives, which as the name suggests, is a scene painted across multiple canvases.

It’s Meyer’s understanding and belief that this aspect ratio of movement in which he’s introduced to his compositions affords the viewer a cinematic experience for all intents and purpose. And it’s difficult to argue with this statement as there’s definitely a sense of the narrative having being furnished with a broader dimension, thus enabled the viewer to enjoy more of a physical and emotional interaction with the art work to a previously un-encountered degree. This angle in itself is designed for the greater part to engage with the viewer’s own emotional ambiguity, an element which is considered and important to the artist, Meyer, which he’s been exploring and evolving for a while. This application of more intense perspective is illustratively presented often by part of a series of typically three to six compositions, formed in chronological scenes.

Meyer absorbs himself in his borderline obsession with both private and public moments, junctures and fleeting interactions, alongside of his fascination with cinema. The subject matter and muses Meyer chooses to centre on is habitually people, more often than not couples, entwined and embroiled in canvas-mounted high drama, complete with tension-fuelled non-dialogue and underpinned with a pointed and erotically charged storyline, ultimately conveying an empowering composition which is by its very definition both visually seductive yet psychologically unsettling at the same time. All of which is no accident, and intentionally pictorially prescribed and directed by Meyer from the outset.

Without losing ourselves in a thin veneer of pretension, it’s fair to imply that Meyer’s screenplays are without anchor or destination with reference to geography, however recognizable in the main in terms of their psychological sites, which essentially raise intriguing possibilities. Of course, Meyer himself is the best placed to explain his ideology on this visual score and adds; “In many ways the surface realism is always a door to the representation of the imagination rather than a literal rendering of a scene.” Which is pretty much how we imagined it to read in all honesty.

One of Meyer’s most engaging exhibitions in recent years was entitled, ‘Truths Revealed’ and set out to explore the darker crevices of the human nature and mind. Always dangerous territory when circumnavigated by a creative type. The compositions which Meyer envisaged and created tackled the politics that encroach on public and personal lives, whether they’re boardroom or bedroom-based subtexts. To Meyer’s mind this series of paintings acted to unfold and dismantle the uncomfortable truths that were present in the underlying psychological realities that simmered beneath as much as the surface realism which he graphically plotted and implemented.

At the time of the above-mentioned new releases, Meyer successfully held his debut exhibition at the London Art Fair, succeeded by an acclaimed exhibition at London´s prestigious Albemarle Gallery, followed hot on the heels by equally as productive runs at several UK-based galleries, whilst New York showcasings were just around the corner. What’s more, Meyer’s individual pieces and collections have found their way into the private and public collections of admirers and career critics/collectors dotted across the globe.