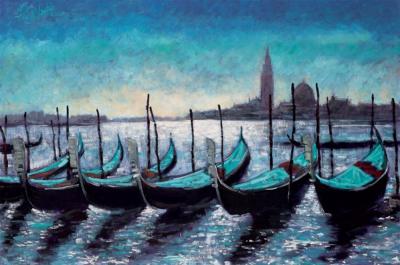 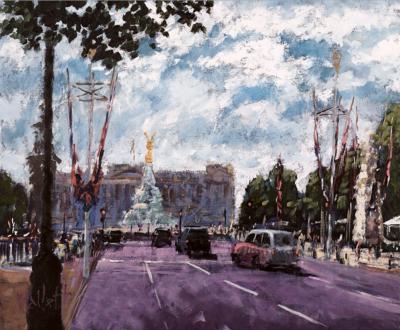 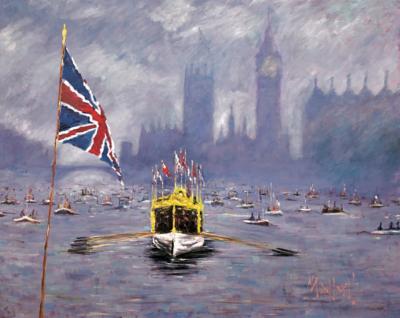 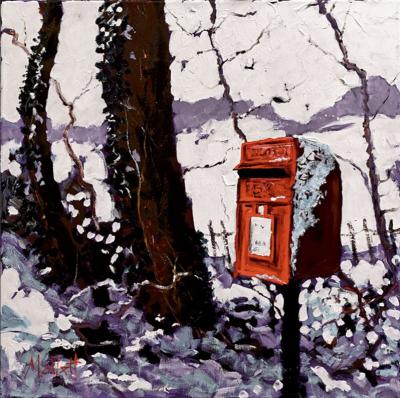 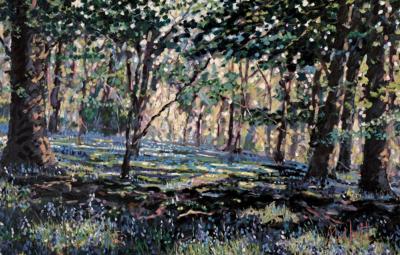 View All Art Works By Timmy Mallett
You can’t keep a good man down, and the same applies for those slightly more wicked. And a certain Timmy Mallett unapologetically fell into the later camp it has to be said. Wickedly funny that is. Throughout the 1980s and 1990s Mallett was omnipresent on our TV screens, well, he was if you happened to be tuning into your box either early in the morning or between school ending and tea-time. And that’s because he was first and foremost found fronting children’s TV programmes, and particularly daft ones at that. Think Pat Sharp, but even more ridiculous if your imagination runs that far. Unlike Sharp, but just like fellow TV presenter around the same time, antipodean-export and all-round light entertainment stalwart, Rolf Harris, Mallett was all the time harbouring an artistic secret. The secret being that he was artistic, obviously. That’s right, all the time whilst playing silly beggars and thumping unsuspecting kids with his massive foam mallet – comically dubbed, ‘Mallett’s Mallett’ – young Timmy was swapping this for Mallett’s Palette backstage; honing and perfecting his creative craft. To cut a long story short – and on this occasion overlook his long and successful radio and TV broadcasting career at the expense of his artistic one – Mallett was quite the budding artist once the cameras had stopped rolling, and after you’d looked beyond his impressive, yet nevertheless irksome telly-presenting persona. And those shirts. Yes, those garishly-coloured shirts and ludicrously-dimensioned spectacles that became his trademark as much as his mallet-wielding antics.

Born in Marple, Nr Stockport in Cheshire, England back in 1955, Mallett attended (what was) Hyde Grammar School where he was noted as having plenty of artistic promise and which led him to study for a History of Art degree at Warwick University on completion of his secondary schooling. Having been heavily involved in student radio at Uni, Mallett was fortunate to grab a slot on BBC Radio Oxford immediately on completion of his degree, where he stayed until he moved to a succession of other radio stations, including Leicester Sound, Radio Luxembourg and Manchester’s Piccadilly Radio where his energetic, goofball presentation style won him numerous fans and a Sony broadcasting award to boot. there followed his ascension to television, and in particular ITV’s flagship early morning breakfast show, TV-am, which effectively afforded Mallett his big break after he appeared on its hugely popular kid’s show, Wide Awake Club. Cue much madness and mayhem as presenter on this show and several more of the same ilk during the following years and Mallett’s mainstream broadcasting career was established. However and as we implied earlier, Mallett was brandishing much more than a riotous sense of child-friendly mischief, fluorescent shirts, alarming glasses and a jumbo mallet all the time, and soon gained a reputation for his art once his TV career reached its sell by date.

It turns out that Mallett’s talent for art stems as much from his father as well as his teachers at school, as the contemporary artist with a passion for landscapes and figurative art explains; and which also underlines the fact that painting isn’t a sudden mid-life whim in Mallett’s case; “I liked art at school, and my dad was an amateur artist who loved to experiment with colours. We did a lot of art together. And I had a good teacher at school too and did art at A-level before studying for a history and art degree." After gaining his degree and embarking on his aforementioned TV career, Mallett still found the time to practice his art, always taking his watercolours on location with him and would regularly be seen painting between camera takes. Looking back at his formative years though, and Mallett talks of how Mallett Snr encouraged his son with oil paints, and he recalls the sheer excitement of the mixing of the paints and the administering of his medium on the canvas. Patience was indeed a virtue according to Mallett; it had to be as he remembers more than anything how long it would take for the paints to dry. Even on the family holidays, Mallett Snr would pack his paints and go off and paint the scenery which confronted him, which often would add to the collection of paintings that would hang from the walls of the Mallett family home.Mallett Jnr waxes lyrical about the smell of the paint too, all fond memories and the starting point to what has become the latest creative chapter in his life being played out today.

Mallet sought inspiration from a host of artistic influences during his formative years, and learned invaluable lessons by studying the works of household names like the Impressionist, Monet and the classic English painter, Turner, whilst also absorbing much knowledge which he’d use in his own later compositions from the equally revered likes of the 17th century Dutch masters, Vermeer and Hobbema. For Mallett; “Part of the attraction is being engrossed in the subject," he says, adding: "Landscapes are my main thing and I'm disappointed if they don't have enough colour in them. I like looking at the contrasts of light and shade and colour."

Today Mallett is settled with his own family in Cookham, Berkshire, a village which was captured on canvas by the great British artist, Stanley Spencer, and it’s a return to the old and traditional values and institutions which Mallett has turned to in recent times to paint physically uplifting pictures of a Britain which he fears is rapidly disappearing. The quintessential red phone boxes and post-boxes that once peppered the thoroughfares of the UK’s rural and suburban areas are fast becoming an endangered species which hasn’t gone unnoticed by Mallett, who was desperate to capture the essence of this decreasing sight and heighten awareness in the course of his beautifully engaging pictorial studies of the genres. In his own inimitable style Mallett concurs; “I mean, when was the last time you actually used one? Probably 15 or 16 years ago”.

Mallett admits to painting every single day, and moreover from still detracting a wealth of pleasure and happiness from it, choosing to favour his long-term preferred mediums of acrylics and oils over any alternative materials to artistically reckon with, and exhibits regularly both locally and nationally through his collaborations with the UK’s leading art publishing houses who gain Mallett’s work even greater exposure. In the last couple of years Mallett has received the ‘Best Up and Coming Artist’ award, handed out by the industry-recognized, Fine Art Trade Guild, and his individual works and collections have been purchased by collectors and investors throughout the UK to date, with some of his original pieces fetching up to £6,000. What’s more in 2002, and to help commemorate the Golden Jubilee of Elizabeth II, Mallett completed a series of 50 portraits of people from around his Berkshire village, included in that list a selection of celebrities such as Jim Rosenthal, Wendy Craig, Toby Cruse, Lorraine Kelly, Ulrika Jonsson and Sir Clive Woodward, as well as Stanley Spencer’s grandson, John. Aside from this, Mallett is also instrumental in fund raising for a number of charitable organisations, chief amongst which are children’s charities and those which support people with autism and Asperger’s Syndrome.