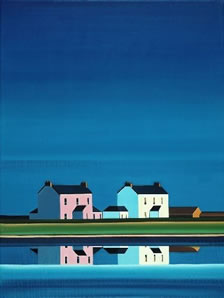 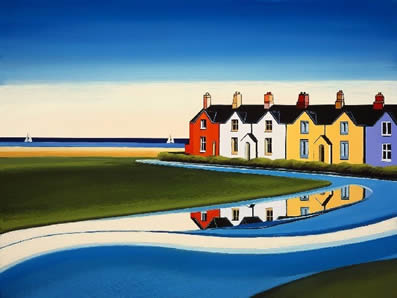 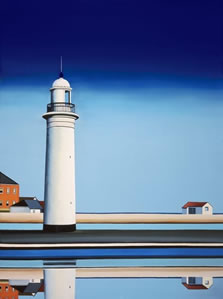 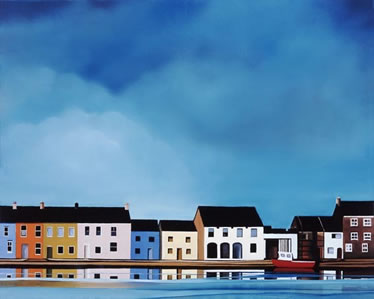 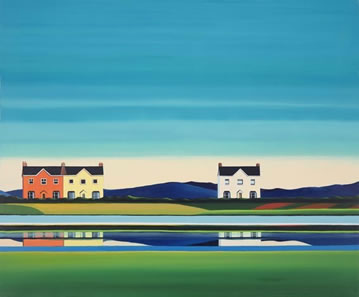 View All Art Works By Barbara James
There’s a symmetry and dimensional balance to a signature Barbara James composition which should be unnerving on first glance, yet is quite the disarming opposite. A love of the sea and a healthy respect for the typical British coastline transpires through the body of the artist’s work which is neither hampered nor restrained in any quarter. Although a clearly creative soul, James’ route to an artistic residence wasn’t channelled from the outset, as the now renowned contemporary artist started out following her passion for performance arts rather than the brush and canvas one.

Attending Middlesex Polytechnic (as was, as most Polys now enjoy University status), James opted to study music, dance and drama, although it didn’t take long for her to decree that her artistic preferences lay in the world of art, rather than the stage, after being involved in set and costume designs for an am-dram production of Hamlet. Thankfully James’ tutors encouraged her to dally with colours, ideas, textiles and other potential mediums and materials, when one of her lecturers discovered a series of sketches she’d been preparing for the costumes ahead of said Shakespeare re-imagining. After graduating with a BA (Hons) she found employment in television; although she continued to practise her new-found love for painting when time was forgiving.

Rewinding to the beginning and James was a child of the 1960s and was born and raised in Hamble in Hampshire, where her love of the sea was first nourished. Despite recalling a fascination with the vividly coloured poster paints of yore and the effects an artist could achieve when introducing them to an inviting surface, James ironically found art to be an incredibly difficult and unfulfilling experience during her formative school years. So with a degree in the bag and uni behind her, James embarked on her new media career, where she stayed making programmes for the majority of her professional life.

Yet James perpetuated her interest in art some years down the line, and in the late 1990s tried her hand at oil painting as she sought an extra dimension to her life. Within just six months James had made the finals of a national competition held by Artists & Illustrators magazine, which worked wonders for her confidence in her abilities in this new field. A blessing in disguise or not, illness resulted in James having to take a sabbatical from her 9 – 5, which holed up at home allowed for her to pay her now undivided attentions to this burgeoning love for art. One thing led to another and before James knew it, she began to exhibit and sell her original works through local galleries.

During this period James returned to her native Hampshire, with her new, old surroundings affording her renewed inspiration for the work that lay ahead. Work for example that came off the back of senior folk at WH Smith happened across one of her paintings and the next thing she knows, James is commissioned to add her flourishing brushwork to the high street retailer’s series of British Artist cards range; with her creations selling over 20,000 copies of the card within 12 months.

Now an extremely successful professional artist, Barbara James declares that her life as an artist has been ""quite a journey since infant school but I am finally beginning to get the pictures out of my head and onto the canvas"

James’ preferred medium in which to paint is that of oils, telling of her feeling for its rich, luscious quality, coupled with the fact that artists have been talking it up for centuries. Lighthouses seemingly play an integral part in any given James composition, and the artist herself offers an explanation as to why by implying that they represent a form of guidance and symbol of hope which provides an iconology to many of us throughout our lives when we’re thrown off course. She also describes how she’s habitually been engrossed by certain visual scenes that rely heavily on mood, light, colour and subject matter becoming one and drawing the viewer right into the canvas.

When broached on her inspirations, James speaks of being aroused and moved by the ordinary, and what a society encounters on a daily basis. In James’ own words; “It could be a few frames from a film, a photograph, a painting or real life - whatever form it takes, the scene has the power to arouse an extraordinarily powerful feeling in me. It's as if one is returning somewhere, to something, always known about but forgotten or never quite seen before in this way, until now.”
In conclusion, James makes much of the underlying fact that for the first two decades of her life, the South Coast was her home, her proving ground, her old familiar. And in spite of a large chunk of her life having taking her to London, before answering the call of the coast once more, she readily considers that the sea must have seeped into her soul as now it spills out with visually arresting regularity on to her canvasses almost to order.