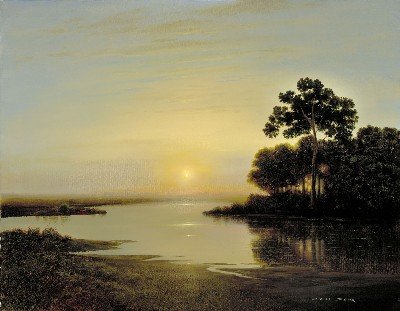 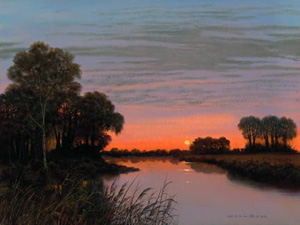 View All Art Works By Gerald Coulson
Itâ€™s not just whatâ€™s in the air that captivates acclaimed fine artist, Gerald Coulson, but the views found directly beneath his exquisite and dynamic paintings of aircraft. So, be they airborne examples of Britainâ€™s historical military heritage or the rolling fields and wooded copses that they flew over on to and into battle, Coulsonâ€™s seismic illustrative captures are instantly engaging, and convincingly executed with painstaking detail and unswerving passion for the subject matter. And then of course thereâ€™s Coulsonâ€™s motorsports illustrations, and in particular his Formula One cars. In fact, itâ€™s near impossible to stereotype or pigeon-hole Coulsonâ€™s art, as for the best part of 40 years heâ€™s practised (or rather, excelled) at painting many subject matters, all of which drawing universal praise from the outset and resulting in the subsequent gaining of an enviable fanbase; anticipating that next release.

And to make matters even more impressive Coulson is one of this breed of massively successful artists whoâ€™s never received a jot of tuition down the line, having taught himself to paint pretty much from scratch. Such critical acclaim ultimately led to Coulsonâ€™s work being showcased and marketed globally, as both original art works and a burgeoning side-line in limited edition prints. Coulson has also been the sole subject of a plethora of exhibitions both here in the UK, America and much further a field to date, whilst a recent one-man show of his attracted some 3,000 people in just two days, underlining his enduring appeal as a formidable fine artist. Whatâ€™s more, Coulson has found himself in the Top Ten Bestselling Artist list, compiled by the industry revered Fine Art Trade Guild, on no fewer than 15 separate occasions, three of which being number one spots.

Coulsonâ€™s fascination with his primary compositional inspiration stemmed from his childhood, as it did for many young boys growing up in the 1930s, having being born in 1926 in Kenilworth, Warwickshire. Coulson started recreating the likeness of these planes that piqued his boyhood interest, as his early promise at drawing and painting gained momentum. After departing secondary education, Coulson undertook an apprenticeship as an aircraft engineer, which he served in the RAF as a technician as well as in the capacity of an engineer with British Airways, and based at Heathrow. Coulsonâ€™s thirst for aviational knowledge â€“ combined with his obvious artistic ability - led him to become a Technical Illustrator next, and responsible for the production of service manuals for Civil and Military aircraft.

Naturally enough, these insights, related experiences and technical understanding afforded Coulson the ability and required skillset to do graphical and illustrative justice to the paintings that he went on to originate and create over the following years, whilst this level of involvement in the aviation industry doubtless influenced his decision to learn to fly, which eventually lead to him receiving his pilotâ€™s qualification in 1961. According to sources, Coulson is still actively flying today and can often be seen flying over the fens of Cambridgeshire in a Tiger Moth or other such vintage aircraft that he remains steadfastly passionate about.

Coulsonâ€™s deft touch with a paint brush and close contact and association with his native subject matter paved the way for his next career opening, as that of a professional aviation artist, which he commenced as of the late 1960s. previously, and five years earlier, Coulson had been elected a member of the Society of Aviation Artists, in recognition to his strictly amateur status painting exploits which hadnâ€™t escaped the notice of the specific genre of art industry. This was followed up in 1957 by an invitation to join the Industrial Painters Group, whilst additionally in 1971 Coulson became founder member and Vice President of the Guild of Aviation Artists. Furthermore, Coulson is the four times winner of the Flight International Trophy for outstanding aviation painting. The RAF Museum in Hendon, RAF Cranwell and the RAF Staff College are all home to a selection of Coulsonâ€™s paintings, while Yorkâ€™s National Railway museum also houses his work.

However Coulsonâ€™s illustrative talent didnâ€™t stop there, as he was an avid and astute painter of countless landscapes, coastal vistas, wildlife scenes, railway subjects and motoring, most of which visually documented huge, pictorially descriptive skies rising above the action below or within. With regard to the motoring, Coulsonâ€™s excitement in this compositional topic was sparked after a visit to the 1991 F1 British Grand Prix, which, courtesy of his detail-rich and technically-accurate artistic mindset, meant that his future interpretations of motorsport such as this was as measured and perfectionistic as his aviation ones were before his pictorial departure.

On the back of this, Coulson is now widely regarded as one of the most successful and collected artists of his generation, especially within his fine art genres, and itâ€™s acknowledged that whether he paints aviation, landscape or portrait, his unique ability to capture the realism and 'moodâ€™ of the scene is unsurpassed.