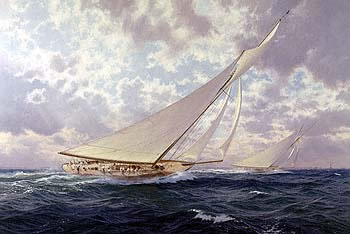 View All Art Works By Steven Dews
For someone who failed his Art A-Level and was unreservedly told that fame only usually comes to an artist posthumously, it’s a surprise that critically acclaimed contemporary marine artist, Steven Dews found himself doing arty things at all in retrospect. Well, it is right up until the juncture that you see his body of work. At this point you’re left in no doubt that the man from Beverley was, despite this intro, destined for compositional greatness in the fullness of time. And to be widely acknowledged as the most sought-after living marine artist.

Born in Beverley, North Humberside back in 1949, Dews can recall that very first picture he drew – aged just 5 – of a boat, when visiting his grandfather with his two brothers. His grandfather, like his forefathers before him, spent his career at sea – albeit in his case as Assistant Dockmaster at Hull Docks, whilst other generations of the Dews family could trace their nautical connections as far back as the 17th Century. With the marine environment and its calling coursing through his veins, Dews dreamed of following his two older siblings into seafaring careers, however this wasn’t to be. Having not made the grade at various Naval institutions, Dews instead opted to attend Hull Regional College of Art where he studied Technical Graphics and Illustration. On successfully graduating, Dews returned to his parent’s home, although would ‘borrow’ a friend’s derelict farmhouse found on the northern banks of the River Humber, where the budding artist would spend hours taking advantage of the fabulous light and general ambience offered by the location and capture his immediate surrounds in a makeshift studio he’d constructed ‘on location’ as such.

Dews threw himself into his art, poring over photographs, reference books, architectural drawings and even model ships, so as to build up an overall feeling and compositional understanding for his preferred subject matter; which of course turned out to be everything maritime. Dews would pay particular close attention to the sea and sky and the diverse and transient moods and representations of both, and moreover their intrinsic relationship in the context of the bigger picture. Manifesting hundreds of pencil sketches during this period, Dews’ creative renderings evolved to comprise accurate, technical drawings which incorporated measurements too.

In the immediate aftermath of his graduation, Dews set about compiling an almost exhaustive portfolio of illustrative works based on marine life and times, ahead of what was to be his debut exhibition in 1976. Seemingly unprecedented, that first showcasing of Dews’ hitherto catalogue of work literally sold out. And that feat was recorded on his first night to boot. What’s more, Dews acquired 17 commissions which would keep him busy for the foreseeable future and help to cement his reputation in his chosen genre. A year later and Dews mounted a follow-up exhibition, this time in San Francisco, which again was sold out and was met with critical and universal acclaim, and there and then announced Dews’ arrival on the contemporary art scene. Consequently, and for the most part, further commissions received on the back of this second outing were from interested parties on the other side of the Atlantic Ocean.

And some in the event turned out to be very high profile clients. Not least was the commercial invite from Amoco to originate and produce 12 compositions for their 1980 corporate calendar, with a brief to reflect the development of the ocean-going vessel; from Sir Francis Drake’s, ‘The Golden Hind’ to modern day craft. Handed this challenge in the autumn of 1979, Dews’ colleagues hinted that it was a poisoned chalice in terms of time restraints and therein a physical impossibility to make the deadline set by Amoco. Nonetheless Dews rose to the challenge and turned the job around in just three months; marking quite some achievement.

These pictures formed part and parcel of an impending major touring art exhibition, opened by HRH The Prince of Wales, which was set up to raise awareness and funds for the excavation of the site of the Mary Rose; Henry VIII’s iconic warship. The exhibition was scheduled to take in 24 destinations around the UK including the National Maritime Museum, and was to eventually close at Amoco’s Chicago HQ. Thereafter, the commissions came flooding in for Dews as his artistic star was definitely in the ascendency. Other commissioned work included; ‘The NorlandUnder Attack During the Falklands' Campaign’ on behalf of North Sea Ferries and ‘The Wrecking of The Star of Polandoff the Coast of China’ for the San Francisco Maritime Museum, whilst in 1985 Dews was commissioned by the syndicate backing Britain’s entry for the America's Cup in Perth, Australia, to execute two paintings to raise money for the challenge. Furthermore in 1988, Dews was approached by the Maritime Services Board of Australia, who duly invited him to paint 'The First Fleet's arrival in Botany Bay' and the Bicentennial Celebrations on Sydney Harbour, which involved two trips to Australia. Not long after this, BP Marine and The Woolwich Building Society commissioned works for their calendars, both to be made up solely from Dews' marine subjects.

Fitted in between commissions, Dews also exhibited in Dubai, while back here in the UK his work was included in a major exhibition of marine art at the Ferens Art Gallery in his native Hull.Then in 1995, Dews produced a composition to commemorate the 150th Anniversary of the formation of the New York Yacht Club, while in 1996 he held a sell-out exhibition of paintings in Bermuda. As Dews’ reputation burgeoned, so did the artist’s lifelong love affair with the sea, and on the back of his meteoric rise (and subsequent commissions) he was in the fortunate position of being able to indulge himself; and so purchased his first yacht. When not capturing the likeness of the sea, Dews was routinely discovered circumnavigating it. Back in his studio – and always the perfectionist – Dews strived for the presentation of meticulous detail, technical accuracy and fundamental realism in his illustrative works, and developed certain ways in which he aimed to achieve this conclusion. One such technique he championed was with the use of mirrors. But alas, no smoke. Essentially Dews would look at an unfinished work in a mirror to see the image afresh in reverse. The trouble is, which he soon realised, was that the reverse image itself can become too familiar and the striving for this perfection can become obsessive. Incidentally – yet continuing his self-critique – Dews admits that he can’t live with his own original paintings on the wall, concurring that the temptation to add to them is too great.

Dews now divided his time between Australia and his home near to England's southern coast, and is perhaps best known to date for his spectacular canvas creation, ‘The Battle of Trafalgar’; a towering original piece which set a new world record price for the artist when it fetched in excess of £95,000 at auction in Bond Street, London in 2005. Easily one of the largest compositions which Dews has ever undertaken, the painting measured some 40” x 66” and took 7 years from commission to final completion.