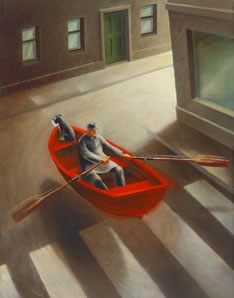 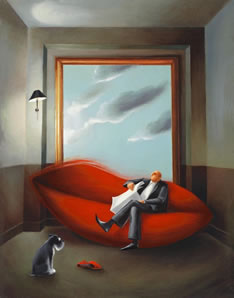 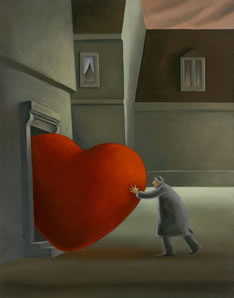 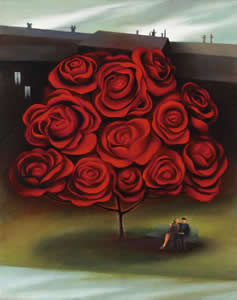 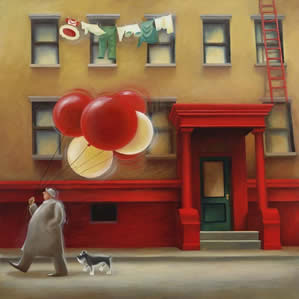 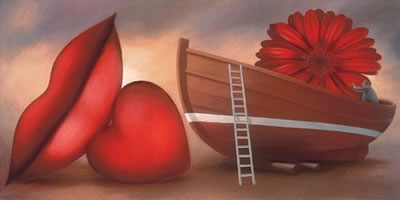 View All Art Works By Berit Kruger Johnsen
Having being told that the only artist previously in her family spiralled into a maelstrom of depression only to wind up institutionalised, it’s no wonder that acclaimed contemporary fine artist, Berit Kruger-Johnsen’s family didn’t exactly encourage her to aspire to follow in her grandfather’s when she expressed an interest as a child. Having said that, Kruger-Johnsen loved drawing and sought a compromise with her parents during her later schooling, that being if she graduated in Biology as her major (to appease them and provide a sensible, structured alternative career path) then she herself would be allowed to study graphic design at an equivalent higher educational level.

Kruger-Johnsen achieved the required Biology degree and was therefore given the green light to apply to attend graphic design school, which she did. At that particular time in Kruger-Johnsen’s native Norway, there was only the one graphic design school, which thankfully happened to be in her home city of Oslo, the nation’s capital. Incidentally, the Biology came about as nature, like art, had played an integral part in Kruger-Johnsen‘s upbringing, and where she grew up she had ready access to the sea, mountains and forest so was never short of inspiration or a desire to learn about the diverse life found all around her.

Whilst at graphic design school, Kruger-Johnsen was fortunate enough to be taught by two respected British illustrators who were there in the capacity of visiting lecturers. They had a Laurel and Hardy act going and Kruger-Johnsen’s final portfolio was very illustration-heavy, despite the core discipline forming only a minimal part of the school’s general design curriculum at the time. On leaving the graphic design school, Kruger-Johnsen gained employment in the advertising industry, where she plied her illustrative trade for a year before arriving at the conclusion her own personal goals and creative interests would be best served by going it alone henceforth. For the past 13 years Kruger-Johnsen has been living and working as freelance illustrator in Melbourne, Australia, having made the seismic move after falling in love with an Aussie whilst on her travels. That’s right, Kruger-Johnsen loved to explore new horizons too, and as the artist admits, never requires much of an excuse to grab her back pack and head off into the great blue yonder. With Kruger-Johnsen’s family still residing in Norway, she still tries to make the global expedition home as often as she can, and is a frequent visitor to her home town

In terms of Kruger-Johnsen’s specific brand of art, one word keeps cropping up. At least to our minds anyway. And that word isn’t so much a word as it is a colour. The colour ‘red’ to be precise. Red tends to emerge in a large percentage of Kruger-Johnsen’s signature work, be it courtesy of large flowers, hearts, lips, balloons or, erm, rowing boats. All symbolic of love and a sense of togetherness and belonging apparently. Which is hard to argue with. Inspiration-wise, and Kruger-Johnsen feels that this can be sourced by many diverse interactions and situations, not to mention inanimate objects for that matter. Indeed the artist pays mention to sculptural shapes and what they represent to the eye of the beholder, as well as suggesting lyrics and quotes or even a snippet of a video can influence her and her work. She describes her compositions as little narratives, whilst her deployment of objects like the recurring ones mentioned are anchored as metaphors and are therefore to be seen as natural extensions of the individual illustration itself.

Kruger-Johnsen insists that the portrayal of these symbolic props are there as visual emoticons, dressing a theatrical scene, similar to stage sets like those found in an opera or play, and that these powerful pictorial messages project and convey a single language of love across cultures. The artist also suggests that colour is vitally important as part of the process to foster a determined mood, and that light is necessary to instigate and pitch drama and a dynamic within her paintings. Kruger-Johnsen’s canvases tend to comprise of a base layer of acrylic gouache, which is then built on with a further dimension or two of oils.