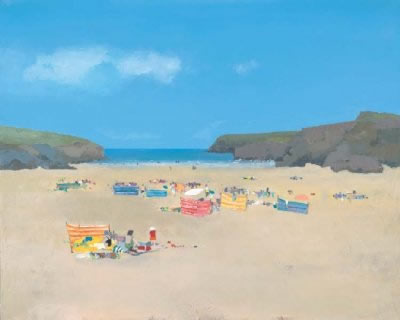 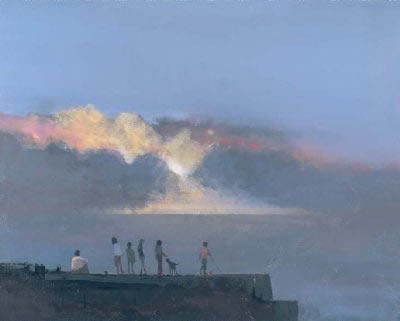 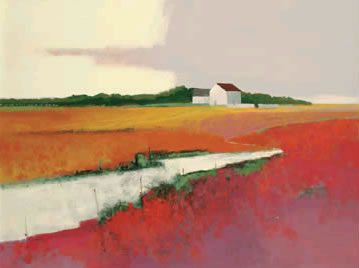 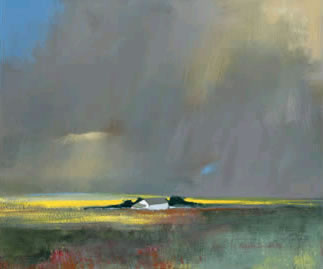 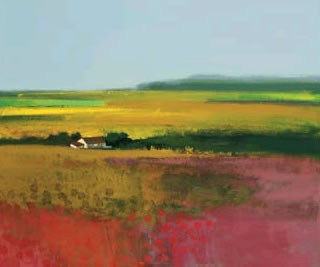 View All Art Works By Mark Godwin
With his signature works hanging proudly from the walls of such blue chip client’s HQs as Ernst Young Ltd, Glaxo Smithkline Beecham, Egon Zehnder Int, Sumitomo Bank, Morgan Stanley Petro Canada, Bank of England and the Foreign & Commonwealth Office to name but a few, acclaimed contemporary abstract landscape artist, Mark Godwin certainly has friends in high places. Or very happy clients, at least, judging by this impressive roll call of the who’s who of global commerce and industry.

Shapes and colours are Godwin’s creative bag, and painterly mark-making as visual metaphors, conveying a concept of landscape rather than the obvious, actual, physical manifestation. That and the visually objective suggestion of feelings garnered from a plausible experience within the confines of that personal space. Godwin’s fascination is foremost with the interaction of the sea with the shoreline, and moreover how the local architecture and general marine apparatus has stood the tests of time and Mother Nature’s challenges, which he sees first hand from his St. Leonards abode in East Sussex abode, unto which he relocated in 2000, and when he takes in the pictorially arresting vistas of the coastlines around Hastings and Rye in particular.

Born in Birmingham in 1957 Godwin graduated from the Royal College of Art in 1982 with a MA in Printmaking, immediately afterward gaining subsequent positions as both a copperplate printer and plate maker with various professional studios in London. This period proved to be priceless in terms of Godwin’s continued education and practical involvement with the materials and mediums of an industry as his etching skillset increased and developed naturally, an area which had long piqued his interest. It also afforded him unlimited access to a diverse cross-section of professional artists, which is always hugely important when looking to exchange ideas and ascertain feedback on your own work.

Carefully dividing his time between his printmaking (9 – 5) demands and his paintings (spare time) preferences, Godwin worked relentlessly, which eventually led to recognition by both art galleries and dealers, especially on the tails of accumulative successes through exhibitions, art fairs and the like. This in turn also brought about the onset of commissioned work. Landscape has always been Godwin’s thing, and has never showed any illustrative signs of letting up any time soon, something confirmed by the artist himself when addressed on the very topic. Godwin; “For as long as I can remember my work has been concerned loosely with the general theme of landscape,” adding: “While working in London my major source of inspiration was the ‘cityscape’ with its energy and motion, its constantly evolving architecture, and its changes of rhythm throughout the day and night”.

Having said this, Godwin doesn’t necessarily have to be location-based to draw (inspiration) from his typical landscapes. On the contrary, as the hugely popular contemporary artist takes much and more from his familiar studio environment and concedes that he detracts oodles of creativity from just being in the presence of the tools of his trade; the paint brushes, the tubes of colours, ink tins, rubber rollers, packs of paper and bundles of un-primed canvases, all telltale evidence of painting and printmaking going on in close proximity. Indeed, Godwin waxes lyrical about the welcome assault on his senses which he receives every morning when he enters his home-studio, from the very feel of the brushes to the distinctive scent emitted by his paints.

Whilst still located in the UK’s capital city (in Godwin’s case, a studio bolt hole in the East End) his development and emergence as an artist to be reckoned with gathered momentum, and his deployment of paint, print-making and collage quickly began to pay off. Godwin’s confident use of colour, and complex compositions, often on a large scale, were the hallmarks of his work over this period of time. But as we touched on earlier, Godwin upped stick and moved to the East Sussex coast at the beginning of the 2000s which inevitably offered the artist a dramatic change of visual experiences and references.

Godwin talks of how this polar opposite of a landscape is a constantly changing one, benefiting from its own rhythms largely dictated by the interjection of nature and commerce to differing degrees. Elaborating on this observation, Godwin adds; “The quality of light reflected off the sea and onto the landscape can appear quite magical one moment and then change to dark and brooding quite quickly. The changing colours of the sky, and its effect upon the countryside, is a constant source of wonderment”. If there’s a singular recurring theme which characterises Godwin’s work, then it’s this romantic idea of what he refers to as The Sublime; a notion inextricably linked to the sea and the coastline in its very physical and emotional roots.

Godwin has showcased his individual pieces and collections in the UK and overseas, whilst portfolio work has been exhibited at countless International Art Fairs.