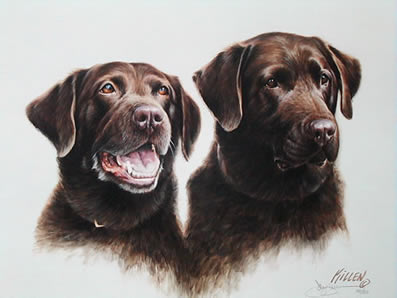 View All Art Works By Jim Killen
Celebrated contemporary wildlife and animal artist, Jim Killen has dedicated his professional painting career to capturing the likeness of all manner of animals, seen in their natural habitat, and on the basis of the enviable reputation he’s forged is universally acknowledged throughout the art world as being one of the greatest dog artists ever. And that’s no wild accusation, as over 40 years Killen has accumulated a massive, loyal following who will attest to this claim, alongside of amassing a dazzling and extensive array of awards, nominations and industry plaudits to substantiate this. Killen’s art is founded in the great outdoors and at the heart of the hunting, fishing and shooting community native not just to his American homeland, but equally to similar territories scattered across the globe. But it’s Killen’s visual fascination with the working dogs that are discovered at the very core of this lifestyle that’s served to put Killen considerable artistic talents firmly on the map; and retaining his presence there for the best part of four decades now.

Killen is recognised as a committed conservationist and keen sportsman, and it’s his passions for this way of life which have morphed so well into his professional art career. Killen can be found deep in the sticks, with his own canine friends by his side and his camera in hand on a regular basis, as he communes with natures and absorbs the beauty and serenity of the great outdoors. Duly noted as one of America's finest water-colourists, Killen captures the spirit of wildlife and sporting dogs in his art, prints and posters with his unique sense of feeling and technique, and courtesy of his subtle, discerning adaption of watercolours. His art is embroiled in the very essence of the outdoor experience, and pictures devotees of traditional game sports and their trusty working dogs, game birds and waterfowl in these typically unspoilt, uplifting environs.

Killen is in his element portraying the way likeminded people choose to live their life, or at least, the leisure aspect of their existences, and his watercolours reflect a philosophy of life and living that is appropriate for an artist of such broad acclaim. Reflecting on his own brand of fine art, Killen says; “I feel fortunate to love what I do every day and hope to bring a sense of joy or recapture a cherished memory for the people who view my art...for this I truly feel blessed by God”.

Born and bred in Minnesota, USA his childhood was enlightened by daily interactions with the nature and country on his doorstep, which he had continual access to. He recalls pheasant fields and prairie potholes as far as the eye could see, which themselves inspired a young Killen to pick up a brush, dip in into some paints and make those first, indelible marks on a career that would encompass and achieve so much, retrospectively. Killen’s wealth of outdoor snapshot memories have served him well over the years, and to this day home is still very much in the midst of this environment and this community that he cherishes. Situated in a wooded area, his third story studio looks out over some 200 acres which Killen himself has been responsible for developing into what’s now classed as a wildlife management zone; with attention given to waterfowl, pheasant, wild turkey and deer habitats amongst others. In addition, he’s also been behind the planting of in excess of 20,000 trees to extend and maintain the existing forest-like setting.

Killen’s undoubted creative talents and natural artistic gift has enabled him to support the causes closest to his heart, that being his beloved wildlife and conservation organizations who are tasked with preserving these all-important environs for future generations to enjoy and work in and around. Killen’s remarkable paintings have served the cause well over the years, with his artwork having earned international honours and generated both widespread exposure and more importantly, millions of dollars for the bodies and groups which are pivotal to the upkeep and evolution of these wildlife domains. Such as Ducks Unlimited International, Pheasants Forever, Quail Unlimited, The Wild Turkey Federation and numerous state conservation programs.

Ducks Unlimited has honored Jim three times as their "International Artist of the Year", and named him one of the "All-Star Artists" for Ducks Unlimited 75th Anniversary celebration in 2012. As you can imagine, Killen’s signature compositions remain in great demand, with every new release hotly anticipated by his legions of followers, whilst he’s received critical acclaim within the industry itself, as he’s regularly manifested pictorial representations of waterfowl, upland game, wild turkey or his favoured working dogs from the outset of his hugely successful career.