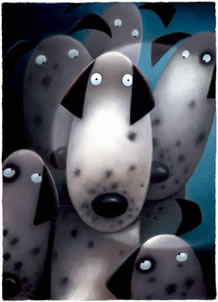 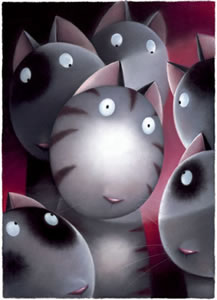 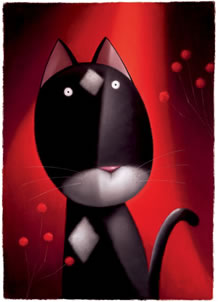 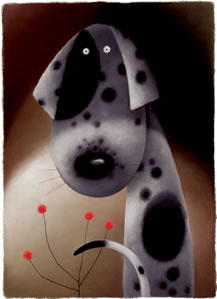 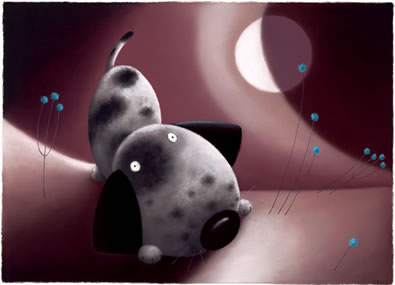 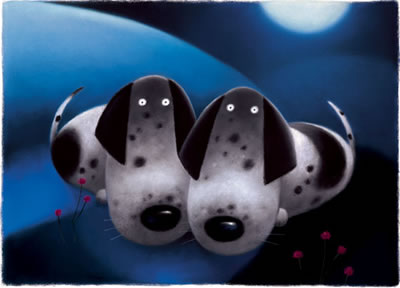 View All Art Works By Roger Hutchings
If luminous quality compositions of cats and dogs are your bag, then Roger Hutchings is unquestionable your man. Affectionately known in certain (artistic) quarters as ‘Hutch’, Hutchings is what’s otherwise referred to in the business as a contemporary figurative/animal fine artist. And he clearly likes cats and dogs if we purely judge him on his back catalogue of compositional work. Born in Middlesex, England in 1943, Hutchings’ family were well versed in the arts and crafts, with his mother competent in many disciplines whilst his father was an accomplished painter in his own right who committed much of his spare time to his extra-curricular passion in life, ensuring that he shared his love for the paint and canvas amongst his three sons.

Tragically, at the age of 10 Hutchings lost his father, yet a young Hutchings had clearly inherited his father’s passion and skill set for art, which he sought to further through his own formal artistic education thereafter. On leaving secondary school, Hutchings promptly landed a role as an Illustrator for a publications company and then – aged just 20 and in collaboration with his brother – set up their own studio in the heart of London’s creative Soho district.

As is well documented, the UK’s capital city was the place to be during what was colloquially dubbed, ‘the swinging sixties’, and as a direct result of them finding themselves at the epicentre of this new wave of cool Britannia, the artistic sibling’s creative services were in much demand, as they fulfilled briefs in the fields of design, animation and book illustration throughout this prosperous and innovative period in their working and social lives.

Come the end of the decade though, and Hutchings (possibly burnt out, creatively) fancied a change of scene - and probably, pace – and on that note decided to move out of London to experience an altogether different lifestyle. Pitching up in, of all places, Yorkshire in the early 1970s, Hutchings would have doubtless felt immediately out of his comfort zone, exacerbated by the underlying fact that Hutchings had never previously ventured more northerly than Watford Gap. Still, it didn’t take him long to settle into his alien surrounds and get his feet, as Hutchings remained up North for a further twenty years; firstly in his position as a Publishing Director (with a company which saw him create and develop the Victoria Plum greetings card brand), then latterly as Group Creative Director for Hallmark Cards.

This cathartic juncture in his life gave him a chance to review where he was (not necessarily geographically so much now) and where he was headed. And ultimately the best course of action for himself and his family. Hutchings arrived at the decision to return to the proverbial drawing board, as he realised that more than ever before he craved more creativity and freedom in his creative life, and it was at this point the idea of going solo and being the architect of his own artistic future entered his thought processes for arguably the first time; and on the back of much soul searching, upping sticks once more and moving back South. Well, South by South West in the event, and to Bath as it duly happened.

But Hutchings wasn’t done with being a slave to the wage just yet, as he spent a further 19 years as a Master Artist for Hallmark in Bath (during which time he both illustrated and art directed intellectual properties such as Country Companions, Forever Friends, Roly Bear, Dylan & Thomas and Disney), before finally spreading his wings and flying solo as he does now. Here he has his own studio, looking out across a rural landscape, and the perfect environ for dedicating himself to his personal paintings.

Today Hutchings creates his (now) signature charming images of instantly engaging animal characters, painted in intriguing situations that never fail to grab the viewer’s imagination, courtesy of the artist’s approach and application of colour, shapes and the mesmerising light and reflections he subjects his, well, subjects to, all under the umbrella of his own company, ‘Character Creations’. Now responsible for originating and illustrating his own unique characters for licensing purposes, Hutchings personal (and personable) ‘creations’ appear across a range of merchandise, including greetings cards, gifts and books.

In terms of his painting compositions, Hutchings’ limited edition art work are published in conjunction with one of the UK’s foremost art publishers, DeMontfort Fine Art.