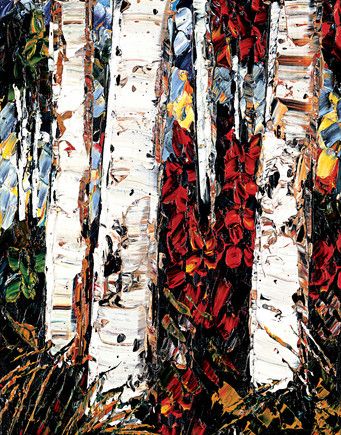 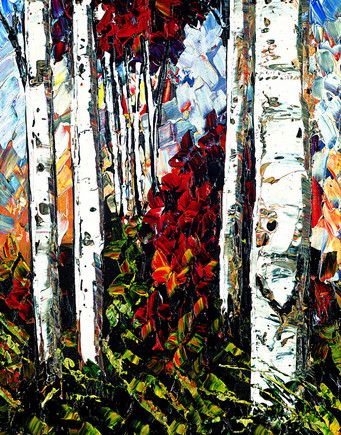 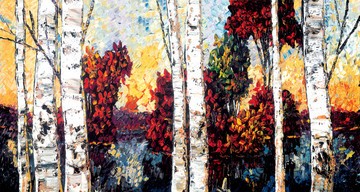 View All Art Works By Maya Eventov
She may sound like a Russian baddie from a James Bond movie, but the only thing bad about Maya Eventov is her style of art. Bad as in good that is, as is the modern turn (on its head) of vernacular. With a knack for blending oil paint with etching to create gloriously technicoloured semblances of wooded, coastal or village reality, acclaimed contemporary landscape artist, Eventov’s hallmark work certainly catches the eye. All manner of flora and fauna are routinely visited and visually manipulated in Eventov’s fantastically coloured compositions which jump off the wall from the room in which they hang, never mind the frame in which they’re portrayed. Trees, flowers, shrubs, leaves, lillipads……woodland, pond and meadow vegetation of every conceivable variety is seen as fair game to Eventov’s roving, creative eye, which she then transforms with her cultured brushstrokes to engender these fabulous, pictorially potent graphic numbers which stop you in your tracks. In a good way, of course. As in, ‘incredibly good’.

Born in St Petersburg (formerly Leningrad – pre 1991) in Russia in 1964, Eventov’s work is said to be representative of a somewhat distinctive contemporary avant-gardism style of painting, which has emerged from Russia in recent years, identified by their exuberant colours, light, detail and reflection considerations and measured draftmanship. Another element which binds the unofficial movement together is that of a feeling of creative wellbeing and moreover a considerable sense of happiness, projected by the warmth and strength of hues and saturations indicative of the current style. In Eventov’s particular case, otherwise mundane and not necessarily celebrated aspects found within the canvases become instantly compelling and take on extraordinary perspectives, care of this influx and direction of colourways, fostering a sense of sophistication and visual decadence, whilst simultaneously remaining whimsical and light-hearted in illustrative narrative.

Eventov elaborates on what she strives to achieve and above all else, convey through her signature compositions by offering the following soundbite: “My works speak of my feelings of happiness, I love to paint, it feels great and I hope my art is a way to transfer this positive energy and wonderful feeling to others,” before adding; “ I want to share the warmth of the afternoon, the smell of the exotic flowers and the sensuous taste of the ripe fruit with the viewer. Wander with me through the roads of Tuscany or come enjoy a quiet moment in a romantic setting somewhere in Spain”. You can count us in if Eventov’s back catalogue of work is anything to go by, that’s for sure.

The art schools of Leningrad provided the training grounds for Eventov as a child, where she mastered the rudimentary artistic disciplines of drawing, painting and composition from an early age. At the tender age of six Eventov began studying art formally and after finishing a four year art program she was given a place at a high school which was affiliated with the St. Petersburg State Academy of Industrial and Applied Art. Eventov went on to graduate with a Master's Degree in Graphic Design in 1987 and her commercial journey thereafter is a fascinating one, having encompassed a cross-section of creatively-instilled genres during the formative part of her career outside of her present day, solo remit.

Firstly securing employment as a children’s book illustrator in her native Russia, which she followed with a spell in wallpaper design. After this period of her career drew to a close, Eventov followed it up with a stint as a muralist, plying this trade in both cinemas and concert halls the length and breadth of the former USSR (Leningrad, Moscow, Erevan and Komsomolsk-na-Amure), alongside of many private residences in Toronto and Dundas, Ontario, in Canada, and where Eventov now refers to as home. Eventov put down her roots in Canada in 1990, and resided there since then with her husband and family, and is the first to admit that her personal style has definitely matured and evolved since immigrating there. But having said that Eventov is inspired by much and many, especially when travelling, citing the Mediterranean and its trademark rich, bold and vibrant colours key amongst which, and without quibble aspects echoed in the bulk of her compositions to date.

Returning to what we touched on at the top, and the underlying fact that Eventov fuses her oils with an etched technique of compositional administration, we learn that this is something that the artist picked up on from a distant childhood memory; which Eventov obviously revisited somewhere during the intervening years. Explaining how she was obsessed with Faberge Eggs when observing them in the nearby Hermitage museum as a youngster, which renders the same applicative approach and process that she champions with aplomb. It was here where Eventov first became aware of the works of the Russian Avant-Gard and Post-Impressionist masters including Renoir, Gauguin, Matisse, Kazimir Malevich, El Lissitzki and Alexander Rodchenko, which she went on to study.

This theme wasn’t always her default setting though, as Eventov produced a collection of original watercolours which were subsequently exhibited in Valencia in Spain, followed by them being made available as print reproductions available for the first time in Europe at Birmingham’s Art Show back in 1998, here in the UK. As it stands, Eventov’s works are showcased regularly in Canada and throughout America, whilst they now form part of private and corporate collections in both countries and beyond.